I have a query regarding which input socket to use on a 552 to connect a Stageline with the intention that the Stageline be powered by the 552. I’ve read the manual and FAQ and it seems to me that I should use input 7 and use a Naim 4-5 interconnect as shown in the photograph below. I thought I’d check on the forum as I’m not very technically minded and could easily get this wrong. Thanks, Neil. 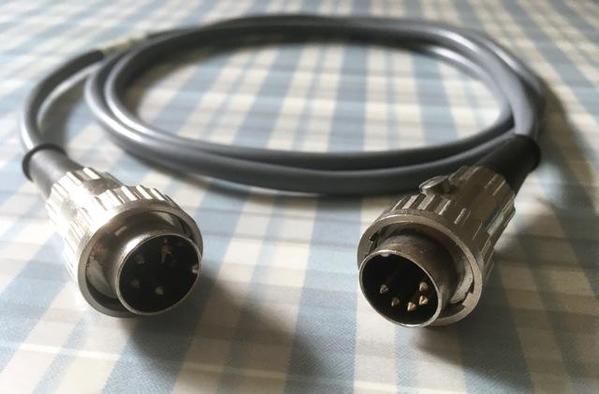 Neil - To use the the powered input on the 552, you just need a SNAIC5 cable to connect input 7 on the 552 to output socket 2 on the Stageline.

Thanks for the quick response James, I’ll give it a try.

Thanks again James - all sorted and working fine.

I have a simular question.
I would like to use or my flatcap which also powers my cd5x for powering the stageline.
Or i might use my spare chc HC. Which is now not a part of my system any more. The cable 4->5 is mandatory? Or are there other options.

When using a separate PSU, the Stageline is being powered via the SNAIC5 and also returning the L&R signals via the PSU.

As we can’t talk about using a non Naim PSU here…Using a Hicap, Socket 4 would connect to the Stageline socket 2 via a SNAIC5. A 4-5 cable allows you to connect Hicap socket 3 (a DIN4) to a 180 deg DIN5 input on a Naim preamp.

So the 4 5 cable is needed if I would like to power the stageline with an external PSU?

. I am trying to understand.
Now it is powered bij the nac202.

You’re presently using the Aux2 in & pwr socket on the 202. This is a powered input so provides both a L&R signal input and 2x 24v rails to power the Stageline.

With your 202 when using a separate power supply, you could now use the Aux2 in socket which is a standard DIN5 180 deg input socket unlike the Aux2 in & pwr which is a DIN5 240 deg socket.

Last week i connected a Stageline N to 552 with Rega P3 Exact. If i ever had a some intention to revive and upgrade the vinyl source, i’m almost sure now that iwill stick with my CD555 on main system. On the other system with CDX2/202 the situation is not that different.
I don’t know what is the main culprit here, but performance is absolutely lame compared with cd.
Part could be the aging Exact (13 yo now with very little use) Stageline as well. Internal cards with Nac 42/ 72 had more dynamics and gain perhaps.

There are many here who rate the Superline or the Urika or both - but see the costs. There look to be fewer fans of the more affordable Stageline or Linn Linto, and I may not be alone in remembering that the Prefix did a rather better job (even if aimed at only one turntable). On the other hand, these phono stages were better in some ways than the internal cards in my old 72 or 82 and they were perhaps fewer good budget phono stages 20+ years ago.

A 13 year old Exact won’t be helping, even if little used, but again that is probably not the core problem - it worked ok given its price.

Jump to the P3 and it is easy to criticise that too (though it is much better than the RP3 I had 30 years ago). However, it is a great budget turntable.

The penultimate word in that sentence is I think the problem here. A CD555 is a magnificent source (and I type that as a happy owner of a mere CDS2), and the CDX2 is still very impressive too. To compete with them, I’d suggest clean vinyl and a P8, P10 or equivalent - an Akurate-style LP12 or Vertere DG1 probably would not be out of place either.

IMHO, you can realistically hope to get at least as much music and enjoyment from that level of turntable as from a CDX2, but to match the detail and grip of your 555 fully might well mean going even further up a turntable ladder. If you look at what even the best Rega costs today and what the CD555 cost over a decade ago, you can probably see why.

That probably leaves you with a decision - either upgrade turntable in a major way so that your LPs are satisfying or give up and make some space where the P3 is now.