Rack arrangement with HiCap and HiLine

Having just acquired a HiLine and reading up on the forum the potential for it to self destruct and the need to keep out of contact with floor and other cables, I’m giving some thought to rearranging layout of my rack. At the moment the nDac is immediately above the SN3 which isn’t going to work for the HiLine. I think my best option is 1 - SN3 / 2 - ND5XS2 / 3 - HiCap / 4 - nDac. Any other suggestions would be gratefully received! 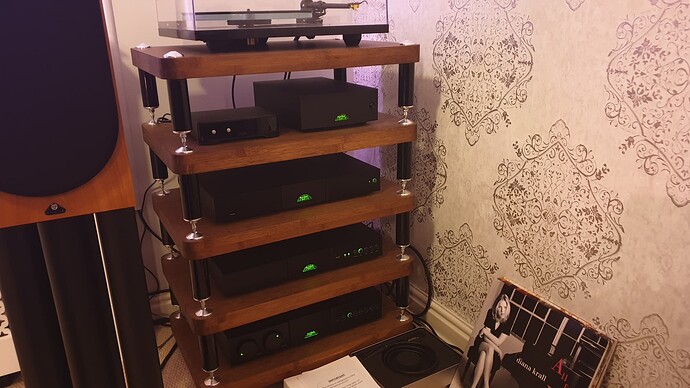 I don’t have a TT but we share other components.

For me I have my nDAC on top shelf followed by the ND5XS2 then the SN3. My hiline doesn’t touch anything(but its still fragile IMHO). XPSDR then the HiCapDR is on the bottom shelf. Hope this helps.

Thanks for suggestion. I guess moving the SN3 up would help avoid the carpet and I think looking at other posts I could then try loosely coiling the HiLine.

Don’t coil the hiline, it should be as relaxed as possible. You will probably have to have the amp and DAC high in the rack to keep it off the floor. My guess is amp above DAC above streamer withe the hicap at the bottom. It does put the TTps in a rather awkward position but if you just leave the deck turning while changing records that won’t matter too much.

Is there a reason why the source and amp are on the bottom? I’d have thought that anything with interactive buttons would go near the top to stop you bending down. Then again, maybe you’re Kenny Baker.

If the SN3 goes on the shelf down from the turntable, and the nDac under that, then your HiLine will gracefully dangle down from the nDAC and up to the SN3 without touching the ground.

FWIW, the HiLine isn’t quite as fragile as made out. I mean, it is prone to coming apart if the rings are knocked but it doesn’t actually self-destruct unprovoked.

Thanks Yeti and feeling_zen. I think my current layout was nothing other than putting the heaviest item on the bottom and the HiCap away from the SN3. Also only ever use the remote/app so never need to reach for the buttons on the device. However the stand is very solid so happy to have a go at essentially reversing the order and does seem the best way to go. Good to know regards the HiLine - might approach slightly less as though its about to immediately shatter!

It’s a good idea to put the Supernait at the top, though do check for any hum on the phono input. The Hiline needs to hang free for best sound. For what it’s worth, it’s fine to put a very loose knot in it, without affecting the sound, if necessary. I had one once and one of the plugs did come apart, all by itself and with no intervention from me. The issue was solved with the SuperLumina of course, but at a price.

By way of follow up I thought I’d just say thanks for the advice. Rearranging the boxes has worked very well and the HiLine is hanging freely with no rings destroyed. Whether its the addition of the HiLine, the better dressing of all my cables or possibly a combination of the two, I’m very pleased with the result. It sounds how I want it to sound! After starting with the SN3 and ND5 XS2 a year ago I’ve made a number of additions and am now settling back to just enjoy the music (safe in the knowledge that my next step would likely be an XPS DR which wouldn’t be feasible for another year in any case!) 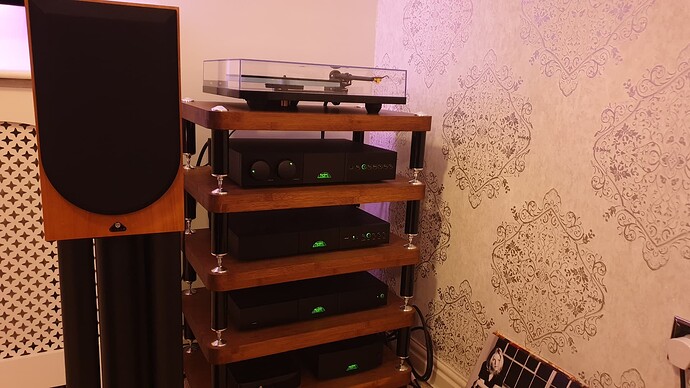 My hiline spontaneously lost a channel and I hadn’t touched it for months. It had been back to Naim for cracked rings a year ago, which cost me €80 postage for the hiline and a Burndy to make the round trip. I put a Lavender in its place but missed the hiline after a while so out came the soldering iron, I didn’t even need any fresh solder.