Even Bill, who runs RP, points out that the improvement is small, which is what I found too, so it’s not just you.

We can enable plugins if they are in the list. Innuos advise it may impact. What plugin do you use for flac?

Michael Hergers Radio Paradise plugin. Not sure what version of LMS is on the Innuos so if does not show up in the inactive plugins you likely need some variant of 7.9.2 which is the now active branch. It comes as standard in all build now. You may be able to add his repo http://www.herger.net/slim-plugins/repo.xml

Actually looks like it works on the older 7.7.6 which was Logitechs last version

And one more important note: you’ll need LMS 7.9.1 or the very latest 7.7.6 to enjoy the greatness of lossless Radio Paradise.

I find the same with RP but JBRadio2 Flac is very much better I think.

Have you looked at the LMS Material skin plug-in? A big improvement IMHO.

JBRadio2 does sound more dynamic than RP flac to me. My guess is they are coloring the stream by bumping up the low and high end. Again, another assumption by me…

No, but I don’t really use LMS regularly, and there are other ways to access RP, so I probably won’t bother. Good to know there are options, though.

works for me for all Flac streams 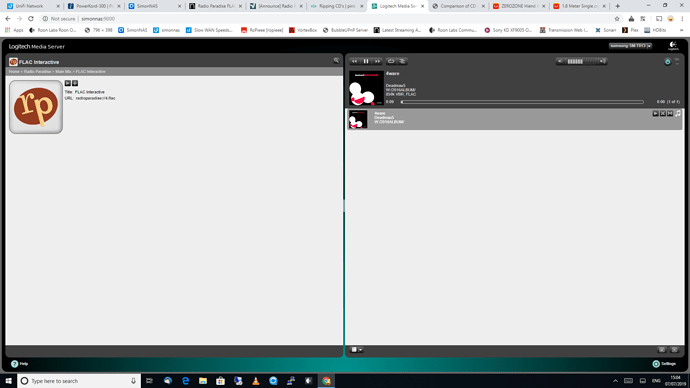 What is the difference between Interactive and Regular?

I have no idea.

Thanks to all the contributors to this thread. Sorted it by installing LMS on my Mac and accessing the RP app and using the FLAC interactive stream. It’s working! Definite improvement on the 320aac stream

Just been told by Innuos customer services that the next release of the Innuos software (ver 1.4.3), available in the next couple of weeks, will support Radio Paradise in formats other than aac.

1.4.3 I wonder if Innuos have the same problem as Naim with firwarr changes affecting SQ

I’ve not heard of any other manufacturers having this issue, but the Unitis are amps as well so different starting point.

Do they, not seen any threads or posts about this. only the Unitis. I guess Naim stuff has less cpu resources internally to deal with software changes that might alter the load and thus sq. Innuos is essentially a multicore computer with expensive PSUs.so has more to play with. Only a theory. I do feel Naims issues are RAM related as if it runs out of steam as a reboot often clears up sq funnies. Does on my Atom at least.