Radio Paradise, so what’s the deal

If Something is too good to be true, it probably is. RP is fabulous, commercial free, no subscription, high sq streams, great playlists etc.
Very folksy, just Bill and Rebecca, yet very very leading edge professional. All on donations? What am I missing?

I wonder the same thing. I had an “Ah Hah” moment several months ago. For me, FM or Radio has always been a secondary source–with all due respects to Richard Sequarra’s Iconic Marantz Tuners. When I listened to internet radio, I expected it to be ok, but not great. What I found was that it was very good.

Then I realized that its quality could approach that of a streamer. Limited by only the equipment at the other end which is its technological limit. Nothing to do with Radio. “Duh”.

It is what it is, a radio station run by voluntary donations. You either like it, or you don’t. I don’t think you’re missing anything.

I agree with Chris, I dont think you’re missing anything. I believe there are quite a number of small/medium businesses in the US who give regular donations and play RP in their factories

The hippies were and are right!

Capitalist economics has no way of coping with altruism - think of the expert assistance freely given on this forum for no monetary reward. The internet can enable the decent and kind people as well as the evil, illustrated so tragically in NZ this morning.

Why subscribe when you can hear it for free? But we do - at least enough of us to keep it going

Capitalist economics has no way of coping with altruism - think of the expert assistance freely given on this forum for no monetary reward.

Unsure why capitalist economics has to “cope” with altruism, but I do know in almost all circumstances, people act in self-interest. That self-interest is not necessarily monetary. I find the biggest hypocrites to be those who proclaim to be helping others who are dis-advantaged. That doesn’t make capitalist shysters any more honourable, but at least they’re not hiding behind a pretense of being altruistic.
It’s certainly possible that RP is as it presents itself, that well-off people can take a hobby and grow it into a successful enterprise. But as it is set-up, I suspect many $$$ were involved to get it (and keep it) to where it is today.

Releasing a service funded by voluntary donation is a pretty well tried and tested business model. It apparently works for RP, and Minimserver springs to mind as another well supported product funded in the same way. For a small business, having the staff and resources to collect payments is a burden, and even a small fee tends to put many potential users off trying it, so I suspect it’s not quite as altruistic as it may appear.

so I suspect it’s not quite as altruistic as it may appear.

Perhaps it’s bordering on the charitable?

I do know in almost all circumstances, people act in self-interest.

That is an excellent example of overgeneralization.
If ‘self-interest’ is whatever you define it to be, then your claim cannot be challenged.

What is the self in your model?
Is it your ‘personality’?
Is it your body only and nothing else?
Or is it you and selected groups of humans?
Or is it you and your legal possesions and bank account?
Or is it all humans - who after all are all going together down a road of global warming, which we jointly have created (in large part because of false homo economicus models such as the one you are promulgating)?
Or it is the local or global biosphere, without which your body would quickly cease to function?

We all jump out of harm’s way if in danger, without exception, because that’s in our self interest.
We all don’t put our hand on a hot stove element because that’s in our self-interest
Self is the human brain and how it is wired. But yes, we all have the capability to shape our beliefs , kidding ourselves about how clever and charitable we are, or arrogantly believing the human race even matters in the larger scheme of things. Closer to home, how a Cisco switch makes a significant improvement in sq.

You’re right Jim, we are off topic…and I started th thread! Let’s start a new one

My six year old just made these.
That was quite selfish of him , but quite altruistic too! 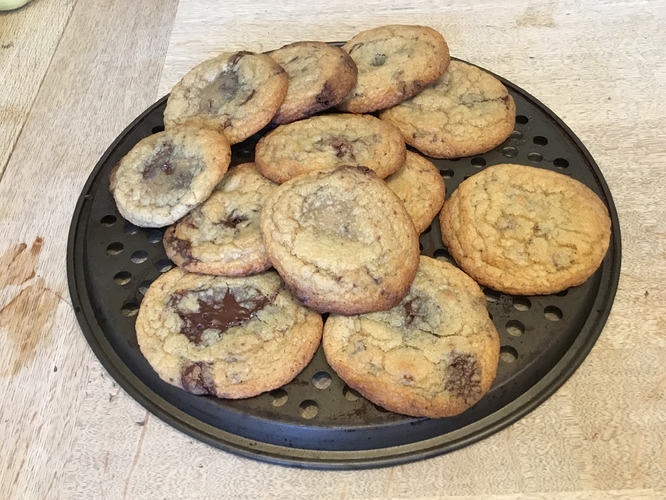 He/she is on the right track!

I can only evaluate his motives if I personally taste the evidence!

My inner crocodile - who has rather lax morals - says, ‘Yes!’.
(But then he always says Yes.)

I am curious: Why the concern over whether Paradise is truly altruistic, or just a hobby for the DJs from which they get some payment, or paid for by some unseen major corporation. Surely for a channel playing music, all that matters is whether they play good music, whether it has adverts and if so whether they are intrusive, and whether they keep going?

Concern a little strong, though I’m conflicted in the sense RPis definitely worthy of financial support on quality/service alone, but an audit trail on sources and uses of funds wouldn’t hurt eithet