Hi
I have legacy streamers and so I used Adrian’s Radio Paradise FLAC thread to get the 3 RadioParadise (RP, Mellow, Rock) and JB Radio 2 working.
Everything has been working perfectly for over 5 months but in the last few days I noticed more and more dropouts.
So today RadioParadise streams work for about 50 seconds and then there is nothing for around 15 seconds and then the stream is playing again. This keeps repeating and as you can imagine has become very annoying!!!

JB Radio 2 in hires is working perfectly fine so thats why I don’t there is a problem with my setup as I did not change anything.
stream transcode is ‘flac:wav,*:L16’ in minimserver. Should this be changed??

Has there been a change to the RadioParadise FLAC streams that I don’t know about???

Anyone got any ideas??

I believe it’s likely a radioparadise server issue (overloaded, bandwidth, who knows) in your part of the world. It’s working fine for me today (Canada), had some dropouts yesterday for a while. I don’t use it for long periods though.

Check the forums at radioparadise, you may find something mentioned. I’m sure they have these type of problems from time to time.

I noticed an odd thing a couple of days ago when Radio Paradise was simply broadcasting a statement saying “Stream not available in your country”. Very odd as it was working perfectly on my other devices but not on my Linn Sekrit DS. I removed the station from my station list, then re-added it and it’s been working fine ever since.
Occasional re-booting of devices might also help to stop drop-outs.

I am noticing drop-outs today as well through Roon. Happy to hear it has nothing to do with my setup.

Possibly just coincidence, but yesterday the RP FLAC stream wouldn’t work at all for me, via vTuner/NDX2. This evening it appears to be working again.

I too have the same issue here, again, using the FLAC workaround on NDS.

Actually, just tried it again this morning and it’s playing like a skipping record/cd for about 15 seconds then drops out completely.

Radio Paradise recently switched to a new streaming server software and it’s having a few technical problems on data delivery.

We’ve been sharing wireshark and I/O plots from their London server to help them focus the issue in. Attached is a graph of the data delivery this morning of VLC playing from Camberley, UK. This shows this is not a product side issue: 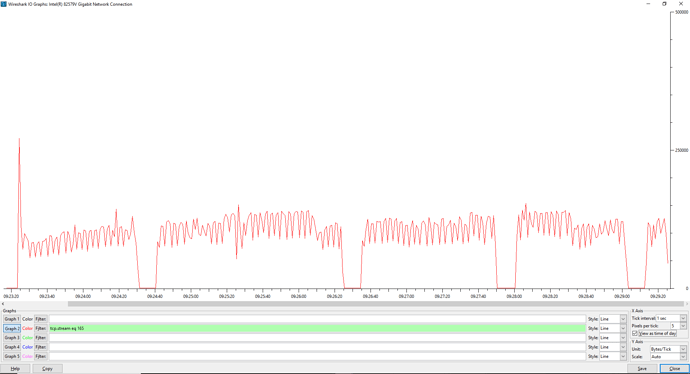 They have setup some server instances that use the older server software and that’s measuring reliably. Use the URL:
http://stream.radioparadise.com/fb/flac (also /mellow-flac /rock-flac /world-etc-flac)

Feel free to switch to those while they get the new servers sorted.

2 other stations I added via vtuner fail today, as did the RadioParadise on the week-end.
That’s coincidence, I guess? (If there’s a RP related issue.)
Then I’ll have to look into that part later again… (after work).

Hi Steve, is there any news about the possibility of the old platform streamers such as my NDS playing the RP FLAC stream (directly)?

I think Steve was pretty clear about that being a non-starter due to the use of Ogg by RP.
I did wonder, given that RP have changed to ALAC for loseless streams from their own apps, whether this might be an option for Naim too, although I have no idea if this is feasible either.

I’ll have a word with the dev house who handle the Bridgeco stack. The FLAC in an OGG container (with optional shoutcast tags) is currently missing from the Bridgeco code, but it might not be too painful to get it added in. Bill at RP has done a good job on adding ‘edge’ servers, to service primary countries so it should (in theory) work as reliably as Tidal support.

BIG THANKS +++ if this can be done. All fingers & toes crossed

Slight thread diversion but just wondering what Elvis Costello has on Bill and Rebecca? Must be some reason for his prominence in the playlist

Brilliant, thanks Steve. Using MinimServer works but we’d have a much neater solution if this was supported within iRadio. And Shoutcast metadata would be the icing on the cake! Fingers crossed.

@stevesky, any update on whether FLAC in OGG container support can be added to the Bridgeco streamers?

Not yet, but we are doing work on the Bridgeco, so once we nail a few more fundamental tasks, we’ll review this one.