Re-releases with extra tracks that mess up the original

I’ve never really enjoyed re-releases where there are ‘bonus’ extra tracks such as re-mixes at the end of a CD/LP you know really well.

Where it really annoys is a new track in the play order when it was missing originally.

Just playing Marillion’s Clutching at Straws on vinyl (2018 5 LP set) and the original single LP is split over 2 discs and there is an extra track ‘Going Under’ at the start of side 2 of LP1 - this was not present on the original vinyl release and really throws the listening experience for me as it doesn’t seem to fit.

Maybe it was there on the original CD release, not sure, but it grates.

Looks like the track was only on the CD, not vinyl or cassette. 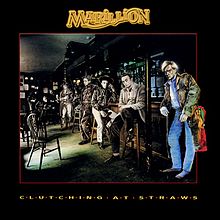 Clutching at Straws is the fourth studio album by the British neo-progressive rock band Marillion, released in 1987. It was the last album with lead singer Fish, who left the band in 1988, and is a concept album. Although Clutching at Straws did not achieve the sales of its predecessor, the number one album Misplaced Childhood, spending 15 weeks on the UK album chart (the shortest chart residency of any of Marillion's first four studio albums), it was still an immediate commercial success, be... 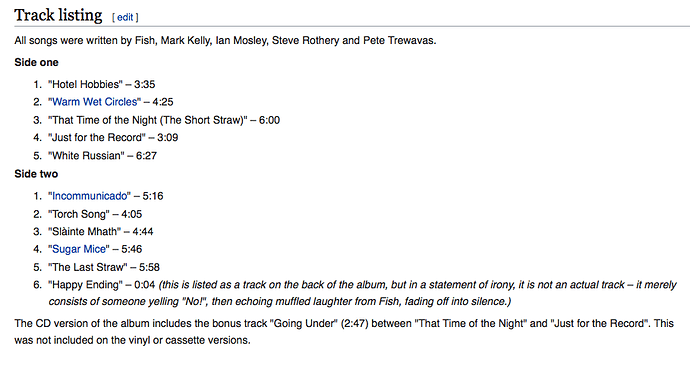 Agree. Can’t stand listening to an album only to hear some poor quality demo tracks at the end. An album is a story and this just spoils it. Second CD is ok but other than that I try to avoid.

Agree on the poor & out of place demo & studio experiments added into a re-release.
That the nice thing about streaming, unlike CD & LP, no matter from a download or a CD rip you are free to pick what tracks to keep or to junk. What I do is keep the re-release album as it is & make a copy with only the original released album tracks.

Fortunately the majority of albums come with the additional tracks added to the end, so when playing a ripped CD I just get the next choice ready to play, and switch when the “proper” album finishes.

Well, I have to say I like having tthem. Sure, they may (?should) be of lower quality than the takes/songs that made the cut, but it’s often fascinating to hear early demos of tracks (e.g. on Paul Simon’s solo albums) or alternate takes of tracks (on many classic jazz albums). As several of you have already said, it’s little effort to program them out if you really do dislike the concept, so surely it’s better to have them and not want them than vice versa.

One thing I wish was more prevalent is including 12” or other extended versions of tracks on re-releases. I’ve spent quite a bit of money (I think it’s been worth it, though others would doubtless disagree) getting CD singles of some late 80s stuff I enjoy and it’s a real shame some remixes are otherwise totally unavailable. I suppose there might be licensing issues with 3rd party remixers, but it still strikes me as a missed opportunity. It also sidesteps the ‘not good enough for the initial album’ carping since the remixes weren’t ever intended for the original album.

I have yet to encounter a ‘bonus track’ worth having. Even those included on The Beatles’ remastered versions of Sgt Peppers and The White Album failed to impress. I listened to the Esher Demos once and feel no need to ever repeat the experience!

My view is that it’s become almost mandatory, regardless of the fact most of the extra tracks would never have seen the light of day on their own merits.

Different topic, but I feel very much the same when it comes to the ‘Bonus’ DVDs which now seem to accompany most films. For the most part they are an absolute waste of time and money, except for those fans so obsessed with the actors/genres they’d watch a recording of the actors sleeping!

Rory Gallager often have great stuff on remastered cd and at the end, after the original album.

Sometimes bonus tracks are poor out-takes, or material discarded for a reason. They may be of interest to a collector of a band’s output, but certainly not to me. Other times they are either material discarded simply because of space constraints (more a the case with albums released originally on vinyl), or are different versions with their own merits.

If genuinely adding to an album as something missing now resolve I leave in place, but otherwise I usually create a second album and put in there (deleting those that are rubbish). That way I can play the album as originally artistically created, yet still access the extra material when I want.

OK, let’s take an example which might be close to a number of forumites’ hearts:

Silver Springs was left off Fleetwood Mac’s Rumours partly due to running time issues, but also due to its emotional content. It’s been described as ‘the best song that never made it to an album’. It was included in re-releases of Rumours about 15 years ago. Was this a good thing or not?

I remain bemused as to why extra tracks on reissues seem to cause so many strong negative feelings. Whether listening on CD or streaming, we are all capable of making our players miss out any tracks we don’t like, so why do so many treat them as such a dreadful imposition? If we were all still listening to everything on vinyl and cassette, I could understand it!

I’m happy with “bonus content”. I accept that much of it will be “listen once, for interest’s sake”, but there are some real gems that never made it onto LP, presumably because of time constraints, but are produced/mixed to what I would call “album standard” (i.e. not “demo” or “first/rough mix”), and therefore in SQ terms are not out of place with the rest of the album.

I remain bemused as to why extra tracks on reissues seem to cause so many strong negative feelings. Whether listening on CD or streaming, we are all capable of making our players miss out any tracks we don’t like

Yes, however that requires you to remember that the album has the extra tracks and to take that action when you play it - but if you forget and simply select the album and sit back and lusten, it can be quite jarring when something unexpected, or worse, something quite out of place, suddenly starts playing.

Personally I certainly don’t object to being “given” extra tracks, but that is with the advantage of streaming files from my store, so I can rearrange the files as indicated in my last post,

I realise I could programme the added tracks out, but the metadata doesn’t even include the number of the take.

First world problem, I know, but just joining in the discussion!

Sure, I can see that particular situation would be deeply irritating. I’ve got the EJC CDs of the 25th June 1961 sessions and all the alternate takes are collected at the end which is surely the sensible way to present it.

I’ve just never quite understood the mindset (exhibited more than once on the old forum, for example) which seems to be so annoyed by extra tracks that they would automatically prefer them never to be offered. Thanks to those who have clarified that it is possible to programme out any unwanted tracks - in past versions of this debate, I have wondered to what extent this was appreciated!

So often when I hear these so called “bonus tracks” I understand why they were left off the original release.

In the case of Waltz for Debby (and Sunday at the Village Vanguard) the solution for me was to buy the Complete box set. Although it only includes one or two tracks missing from the aforementioned releases, it does present the music in each set in the sequence played on the day. That way the different takes make perfect sense. It’s such fine music that I think it’s worth the cost.

Often I’d agree with you, Lindsay, but not in the case of Bill Evans’s performances at the Village Vanguard on 25 June 1961. It’s sublime music making and a ridiculously fine recording, which is as good as, if not better than, any recording made today.