i would like to run the Naim APP and Tidal in a dedicated Android tablet (instead of my smartphone) do you have any recommendation for a tablet?

Very happy with my Samsung Galaxy Tab A7 - nice size, good screen, plenty of performance for this purpose and widely available for around £150.

another vote for samsung galaxy tab a7

I would recommend an iPad. The Android version of the Naim app does not have the Rovi information, and the iOS version is generally more polished. (And although I use Android phones, I have to say that the tablet experience is generally better on iOS, also with regard to other apps you may want). If you want Android, there are not many modern tablets apart from the Samsungs. I would go with an S model, not the A. The better performance helps the Naim app and it’s generally the better tablet.

(I have the Samsung A10 and it’s not a speed demon, and the Naim app struggles with being laggy at times)

The problem with an iPad is that there is limited interconnectivity. For example I take my tablet on holiday along with a couple of SD cards and thus have all my music available. Apple devices don’t accept any extra storage and are difficult to connect with anything else, for example hotel tvs.

I am happy with it. Use it only for my NDX2.

That is not true with respect to storage. But you do need an appropriate Apple connector dongle. I bought a both a 512 Gig USB stick and a 512 Gig memory card together with the respective Lightning connectors for them. I also bought nPlayer, a third party app that can play music accessed through Files.

The card is the better choice for the iDevices. You just insert it into one end of the dongle and insert the other end into the Lightning input. Bingo - I have virtually my entire library available to me.

The USB connector is not as convenient. The iDevices I tried both needed a power source for it (beyond the iDevice itself). The connector makes this possible - but it means that you can only use it while the connector is plugged into a power supply. This can be a power brick, which means it is portable, but it is also somewhat unwieldy. The advantage of the USB stick is I can plug it into anything with a USB input.

Lenovo Tab K10 (but wait until it’s on offer from Lenovo, or track down Lenovo coupons online)

Another one for an A7.
Had an iPad before that. Extremely slow. Granted,was an old iPad 2,but only thing running on it was the Naim app. Loading the contents of the UPnP server on my NAS litteraly took ages. On my Android phone it was lightning fast. So ordered an A7 for €150. Very pleased with it. And Rovi? Well not much info in there that you can’t get with a simple Google search. Should you need it.

Apologies for my ignorance but what is Rovi information and what impact would its absence have?

Extended information about albums and artists. 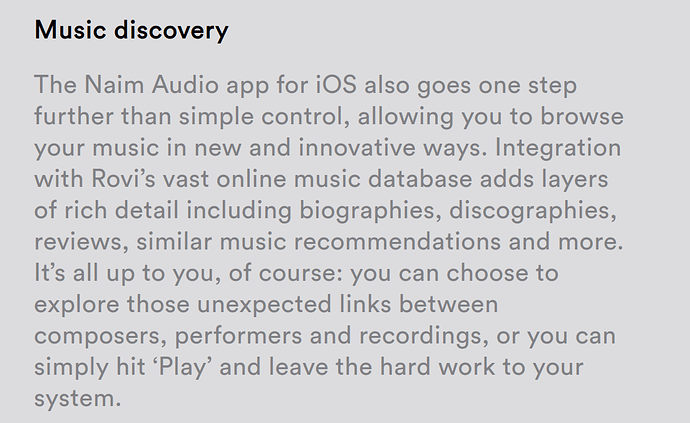 Thank you, had missed this completely. Rookie mistake.

I had the same requirements and wanted a small tablet solely for ROON streaming duties.

I went with a Fire HD8 Tablet, benefits being:

I never ran the NAIM app on it but if you want to stay in Apple ecosystem then I’d go for an iPad Mini. For me they are the greatest iPad made and I wish I’d never gotten rid of mine.

I had an Amazon Fire HD7 for years until the battery gave out after about 7 years.

Replaced it with a Lenovo M8 Smart Tab with docking/charging station which cost £110 about 18 months ago. Excellent. Always charged and it has battery protection on it.
I can see what is playing.

A new model is due out from Lenovo shortly probably about £125.
The larger M10 model has a different dock/charging arrangement and is not so nice. 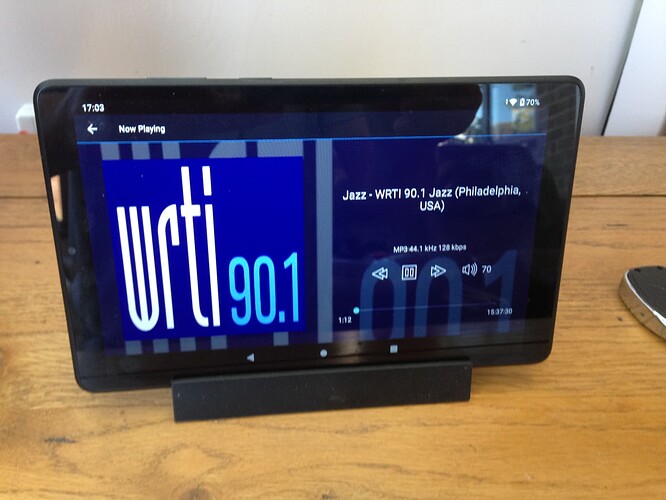 To do exactly that job. Hoping as a dedicated Naim App controller for the house it should be good enough £126 with dock. The iPad was £300 and no stand ?

First android unit I will own so fingers crossed. Surely with only one job to do it will be fine ?!

Any recent iPad will give a solid experience. Very old iPad’s are showing their lack of processor, but any iPad with the last 4 years will work very well with the Naim or Roon or any other app for streaming.

Also there are very good android tablets now, the same rule apply’s, if they are recent hardware they will work very good for remote controlling your music and running the Naim app.

An advantage of Android (and Amazon Android) is that the superb BubbleUPnP App is available which I use to stream to other non-compatible devices. BubbleUPnP is not available on IPad and IOS devices. Bubble will also enable Qobuz to be streamed to Naim NDX and Mu-So 1 which otherwise do not support it.

I bought a cheap samsung galaxy a7 lite as backup to iphone 11. This Samsung and Naim app combined is sluggish and unresponsive sometimes. Iphone 11 and Naim app is much superior experience. If i was buying again i would chose a recent ipad or a faster Samsung

I think I have a recent Samsung M8 and as you say it’s sluggish and the Naim app struggles to find the units.

The apple products are instant. It’s manageable and cN tolerate for the price reduction compared to an iPad. But I won’t recommend