Wondering if anyone has tried the new red mat that’s creating quite a stir
Myself, I’m tempted but it’s hardly subtle to look at and wouldn’t blend at all with the quality appearance of the TT as it stands

A couple of people on the “last gear you bought” thread had tried it and were positive.

The writing part is easy to solve, as it’s only on one side. I do agree with you on the red, though

@Lyndon I tried it some time ago, a good friend of mine knows one of the guys who created the mat
my system at the time was running in with new 252 so I could not make an informed choice, so left it

yesterday I was on the way to a meeting and called in to @Cymbiosis and spoke to Peter, had a 10 min demo on Klimax deck 3 x 250XDR active through T808’s - the result i purchased one

tigher and more detailed bass line, vocals - tried it against Linn Matt. Carollo Matt and one of Peters house of Linn Matt

Infidelity had run out of stock of the Collaro Mat or had last week. I have the option of a sale or return when more stock arrives.For £100 its worth a try in my book.
Yes, the finish is quite bling but if it works especially at the price it would be a keeper for me.
Douglas.

it’s hardly subtle to look at

With you. Totally hideous. Might look alright on a black plinth but even then.

I wouldn’t be too keen on the bright red mat + writing. Many years ago I had one of these: 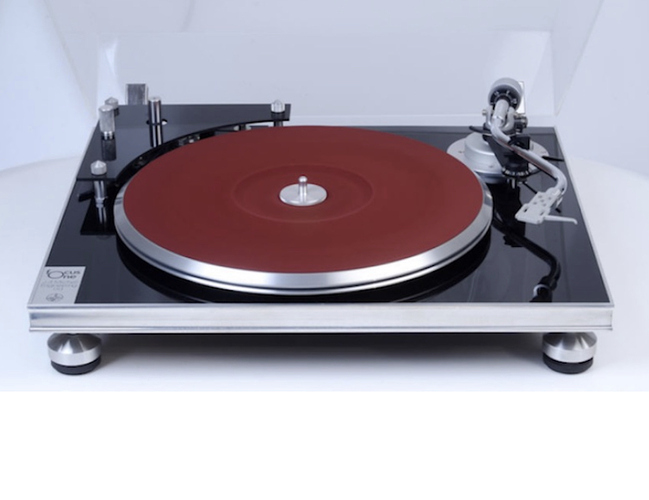 I must be the only person on this, or other fora that doesn’t object to the colour.
It and the font of the name are a brand identity.
In the same way that when I chose my speakers, I asked dearly beloved if she could live with them, her response they are for listening to…
Also for me there is the nostalgia. Dad’s original “hifi” consisted of a Collaro turntable and Studio Transcriptor tape deck. They were cream plastic/bakelite with maroon controls.
I admit I might be put off if the mat was cream, so on that basis, the company made a good decision.

I’m now feeling a bit bad because Lyndon is really asking about the sound.

Exactly, as per Christopher M
We have a plan to negate the appearance so it’s just down to SQ then

As they have resurrected the Collaro name they also seem to be using something similar to their traditional colour scheme! However the rubber mat on my 4T200 is slightly less bright in colour.

For those of you that don’t know the 4T200 was Collaro’s competitor to the Garrard 301. It lacks variable speed and a cast chassis, but it does have an 8Lb platter!

The new mat is said to be suitable for the Garrard, however the existing heavy rubber unit damps ringing in the platter, not sure this one would.

My curiosity about the possible sound improvement has overridden my strong misgivings about the cosmetics of the Collaro mat. Pressed by family on ideas for a Christmas present I figure it’s gotta be a better punt than more socks or a sweater!
Santa has thus been mobilised.
I figure I’ll just keep the original Linn black felt map to lay on top of it when the TT is not in use…

It looks a whole lot better on the platter, trust me. The red is not pillar-box. I thought I’d dislike the look, but…it’s OK.
And as someone above suggested, the Collaro logo is only on one side…

My initial listens today, but sadly shortened, are that it brings a clarity to the party. Liked it in the brief period I had to sit and listen. More focused. But more listening time to be done…

Signals have tried it on a number of decks and for the money its a no brainer as an upgrade…not sure on the colour, but we all have a choice.

I have one and like it a lot. I just leave a record on the turntable to hide the colour, but as has been said it is not a bright in your face red anyway.

Purchased one at CymbiosIs myself this last weekend. Even my wife, who is usually fairly cynical about these things, could hear a clear improvement.

I LOVE the red.