I currently have a Rega Aura on loan to audition. My Aria has seen 2 turntable, 2 amplifier and 1 speaker upgrade, its a great bit of kit. The Aura is 4 grand, but 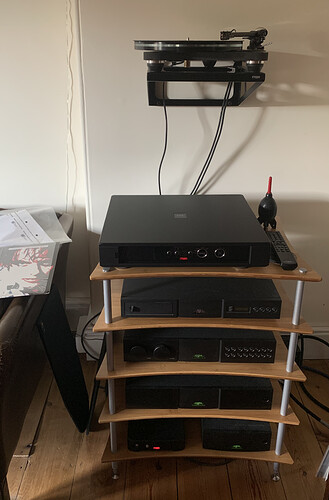 Do share your thoughts and experiences
(1) have you auditioned other options?
(2) can you some how quantify uplift from Aria to Aura?

Rega certainly know how to do vinyl replay. Enjoy your music.

Exactly the same happened to me! Heard it and didn’t want to give it back. I got really lucky though as it was an ex-dem unit at an ex-dem price; still, would have paid the full whack for it and now have a P10 - a combination surely made in heaven.

Very fine sounding phono stage, thats easy to adjust settings, mono button, hi and low gain, balanced out and a 30 minute warm up time, plus completely silent, what’s not to like?

Giving it back is just going to be so hard, plus it will sound broken once you do, so best getting looking down the back of the sofa, for all that lost change

I have a Rega Aura on home demo too. After a bit of faff with cable management with the Fraim it’s now sitting much better on the shelf and sounding fab.

It is an awesome phono stage and partners very well with the P10/Apheta 3. I won’t want to give it back either…

Has anyone tried or heard what the Aura does for an LP12 ? I currently use Urika 1 into 552 which is good, but there’s always room for upgrades if indeed it would be one. I’m 5 hours from my dealer so demoing is not easy. If I had one sent I’d have to also get a tonearm cable and fit it, and would that mean suspension adjustments ?

I had an Urika in the past and now I’m using an Aura with my LP12. Conceptually, I always preferred running the LP12 with a real tonearm cable, but yes, the suspension will go lower once you replace it due to the weight of the lead.

The Aura manages to be both clearer and more impactful than the Urika. I can’t quite describe it, but I certainly prefer it.

Rega are steadily encroaching Linn and Naim with turntables and amps respectively , yet still retain feet firmly in the budget sector.

Suspect not getting streaming is to their advantage here

Thanks for your reply, I think the Aura is probably favourite for a phonostage upgrade. I know there’s plenty of choice with this but getting to hear them is difficult as I said.

I did buy mine sight unseen due to the times we are in, as an ex-demo item. This is probably the longest I’ve gone without a visit to my dealer in about 10 years or so.

I can only make presumptions about why the Aura sounds to good to me…but here goes…it does not seem to have a sonic signature. I seem to just get the music.
Previously: DV75 Mk IV

I have used my aura with a P10 apheta3 and aphelion2, obviously these worked fine as you expect from the same manufacturer.
But now i use it with my SME turntable with dynavector drt xv1t cartridge and once again its fantastic.
So i dont think it really matters which turntable, arm or cartridge you use, the aura will be up to the job.
I have found with my new turntable that being able to adjust the loading, by simply turning the knob on the front is far better way to do things, so much easier to hear the difference, as its instant. Plus my new dynavector cartridge is far more responsive to load change than any of my rega cartridge’s were, as before it didn’t really make any difference, but now its a massive difference.

I agree that there is a need to match with the cartridge (and the Aura is flexible enough to work with many) but TT shouldn’t matter.

Okay I’m not very good at writing equipment reviews, the ones I read in the hifi press I sometimes wonder what planet they’re on! But here goes…Over the last few days I’ve played a range of records with varying styles, DM’s Violator, Cream’s Disraeli Gears in mono (so that little button on the front of the Aura comes in handy), Steven Wilson’s remix of The Yes Album (I just love Starship Trooper) Massive Attack’s Heligoland and Tracey Chapman’s wonderful debut album, for example.
There is a level of detail with the Aura that has had me hearing things I hadn’t before, separation is superb, bass is rich and velvety and never overpowers. The top end is as sweet as a nut; for me that’s important as I can suffer with tinnitus, thankfully not badly, and I am very susceptible to top end harshness, mind you I haven’t played Psychocandy by The Jesus And Mary Chain yet, that’ll be a test!
A comment from my wife, who is not in any way an audiophile, when she heard Tracey Chapman playing…”OMG, it sounds like she’s in the room with us”
No doubt with time and further listening (and some experimentation with the settings) I will get an even better feel for what the Aura can do, but I think just this limited home demo shows it is a remarkable bit of kit which fully deserves its plaudits.
btw, the interconnects I used are a pair of Russ Andrew’s Silver Streak cables.
If you visit Analogue Seduction’s website there is a fairly in depth review from someone who upgraded their Aria to an Aura.
Cheers,
Ewen

Wow, that’s a serious cart’, I have a DV XX-2 MKII, I love it but would be very interested to know how yours would compare given the price difference.

Its the cartridge i fell for the first time i heard one, simply gorgeous, it made my aphelion2 sound hard, sharp and really not that great.
I really wanted to fit it on my P10, but it was always going to be a compromise on it, and so probably not worth investing in, that’s what prompted the turntable changed.

Sometimes its best not to know things, or even worse try them, as you think you have it all and then realize you’re not even close, O what fun this hobby is lol

Its the cartridge i fell for the first time i heard one, simply gorgeous, it made my aphelion2 sound hard, sharp and really not that great.

Sometimes its best not to know things, or even worse try them, as you think you have it all and then realize you’re not even close, O what fun this hobby is lol

Nail on the head Dunc.

I’ve been using my lp-12 (near akurate level) with lingo4 and mega aura. It just sounds very clean and clear. Once it is set basically just leave it in place. I guess I may find out more about the settings soon as I managed to mangle the stylus on my Krystal cartridge so may try a different cartridge.

Well here’s an odd thing. Well I’m contemplating the Aura in place of my Aria. The downside is I have Thorens TD124 Mk II which has my RP8 tonearm with a Dynavector MM cartridge attached. So I disconnected the leads and much to my surprise there has been a further improvement in SQ on the digital and RP10/Aphelion!

The only thing I can think off is that even though the MM is not selected (or the Aria when listening to digital) it somehow contributes to the signal earth path into the 552! Broadly speaking the improvement has been to the mids and highs. It affects emotion in the voice.

Anyone ever been in this situation?