Rock - not sounding so good?

I recently read a thread on a Facebook group that I think is worth exploring here. The suggestion by the poster was that “rock” (which is undoubtedly a broad category) just didn’t sound good on his system (Moon 340ix, Music Fidelity M6sCD and B&W 706s2). The description given was that rock degenerates into a “wall of sound compression when things get busy.”

I have to say I agree for the most part. Of course, there are simply amazing recordings - the classics come to mind immediately (Steely Dan, Dire Straits, Pink Floyd), but these, I would say at least, are at the fringes of “rock”, lighter or blues-ier or more contemporary side (Radiohead too there perhaps).

One comment noted that many successful rock albums of the 80, and 90s onwards have not been well recorded and mastered (someone stated “compressed” but I’ve only heard this term used for streaming etc - excuse my ignorance). I wonder if those with better systems than mine would agree, but also be able to cite some notable exceptions - which is what I’m getting to…

I’m raising this for two reasons: 1) to get your opinions on the quality or “compressed” argument; and 2) to hear about what “rock” albums you’d recommend. I would exclude “metal” and “blues” from this category.

Something to start: Chris Rea, Road to Hell; David Bowie, Black Star; Royal Blood, Trouble’s Coming (single); and a couple that are nearly there but wish they were a bit better: Kings of Leon, Only by the Night; Nirvana, Nevermind.

A fair bit of straight rock doesn’t have much dynamic range live, much being everything louder than everything else… It is therefore unsurprising that some recorded rock is similar. But it is hard to generalise as it varies between bands and the music they play - and sometimes even between different releases of the same thing.

Compression, incidentally, is common with vinyl because the medium doesn’t have as wide a dynamic range capability as some music (or as wide as digital). But digital, including CDs not just files for streaming, have often been poorly mastered, unnecessarily compressing the music - and taken to extreme in the so-called “loudness war”.

Absolutely. Trying to seek out those good’uns…

Along with the reduced dynamic range, I think there is also a speaker element to this. I have always had the same disappointment with rock music but after building a large 3 way speaker i can say that busy rock music sounds significantly better. I assume it is due to the drivers not having to deal with delivering the finer details as well as pumping deep bass and kick drums at the same time. Instead i have a dedicated 12” driver pumping bass, leaving the 6” midrange the details. I used to have a 6”+1”, and it just falls apart in comparison.

Good point. I’ve wondered about adding a subwoofer to see if this improves things. I’ve moved away from listening to generic rock music on my Naim (but still seek out the good stuff and listen to it as and when). Instead I use the Sonos set up which is obvs nowhere near the detail of the Naim but offers a basey filtered sound that’s good enough for parties.

Rock sounds pretty good on my system it’s more of what I play. I get how it can sound bad though and have that wall of urghhh. Less so with the new ProAcs though.

I don’t listen to metal but I have some more modern rock recordings that sound awesome and some not. Nevermind actually sounds really good on mine, Black Crows both albums never sounded so good. Television Marquee moon stunjng, it’s why I bought the speakers and Sonic Youths Daydream Nation that is a wall of noise purposefully is just kind blowing. Spiritualized’s Ladies and Gentlemen is the the same and actually very nuansed. I need to try some more hard rock and see I guess.

I do think the speakers and room play more than anything else. I have mine perfectly balanced now and it’s good across all music. But a bad heavily compressed recording is just that and can’t be helped by anything.

I think the answer is yes and no … a case in point is the latest Bruce Springsteen album … the first track is amazing…the rest are meh… Having said that I have found as I have upgraded … my system has opened up what there is … but it is dependant on source. There is an old Alan Parsons track that proves this…the track ‘The Voice’ on I Robot…it has a complex mix in the middle of the track…I used to have to turn the volume down as it used to sound loud and compressed… but as my system has been updated this has opened right out and although still compressed it sounds so much better…

Also rock is a style that almost invariably sounds best loud, and the louder the better - you should really feel the pummelling of the drums shaking your clothing and hear the lead guitar soar, almost inducing feedback in your room, while the bass vibrates your nether regions… But it requires full range speakers to do properly, and both speakers and amp capable of playing loud without overloading.

“wall of sound compression when things get busy.”

Thats what you get once you have rear ported B&W’s.

The person should move them far from the wall, think at least a meter. Also, fill the stands with sand and use spikes on floor protectors.

These loudspeakers can perform well but so many people think they work well in an average room. Well, they don’t. These loudspeakers might work well on low volume but simply boom all over the place when close to a wall. The low frequencies then take over any detail et voila, the wall of sound and no detail is there.

Along with the reduced dynamic range, I think there is also a speaker element to this. I

Absolutely. A lot of rock is also just poorly mastered. Even the well mastered stuff is pretty busy and asks a lot of the system. Transients are thick and fast often so it is easy for an amp to run out of puff and just not be able to keep the caps topped up. And Single or dual driver speakers can struggle to respond quickly to the overlay of everything happening on the same few drivers.

I have a few rock albums that are just mastered to perfection and on a good system, totally blow me away. I have more than get muddy fast.

I find that all things being equal (i.e. dealing with really well mastered material), it is far easier for jazz to sound impressive on a system than rock. A lot of systems sound really impressive and realistic when the musical arrangement is simple. But most fall apart and lose the plot when the kitchen sink is thrown at them. This might be why so many audiophiles flock to jazz.

Thats what you get once you have rear ported B&W’s.

This is a good point. I listen to a lot of heavy rock, and when i used to own B&W floorstanders i really needed to plug the ports for them to sound well, even when they were placed some 50cm from the walls.

You say that Jazz music is based on easy arrangement ?
I agree that popular jazz like Astrud Giberto, Norah Jones or Melody Gardo is easy to sound impressive and the arrangement are a bit binary.
But it’s not the case for a lot of instrumental modern jazz , with multi imbricated rhythms, a lot of musicians and progression in the track.
For example John Mc Laughlin Mahavishnu orchestra, or any Miles Davis after 1969.
And the sound generally is very good.
So maybe sound quality in rock music is not a priority ?

The true fettle of a system is Mingus’ “II B.S.” off of Mingus, Mingus, Mingus. It gets busy really fast, and can sound absolute mush but as your source gets better, amplification has more overhead, speakers more defined, one can start to follow individual instruments better through it. Same goes for rock and classical. Classic Blue Note combo jazz is easier but then one mostly needs to deal with the top end for trebly horn fatigue.

I’m sorry but B&W are all but neutral.

What a great excuse to play the Mingus Mingus Mingus album (actually no excuse is needed as it’s a damn fine album, which is tremendously well recorded too). I played the CD rip and I’m pleased to say that it sounded jolly fine here!

Rock is probably one of the most difficult genres to get right.
As well as sounding great on the car radio, it was also marketed towards the young affluent hipsters to sound great on their home hifi whilst a fancy young lady in hotpants served them a long short. 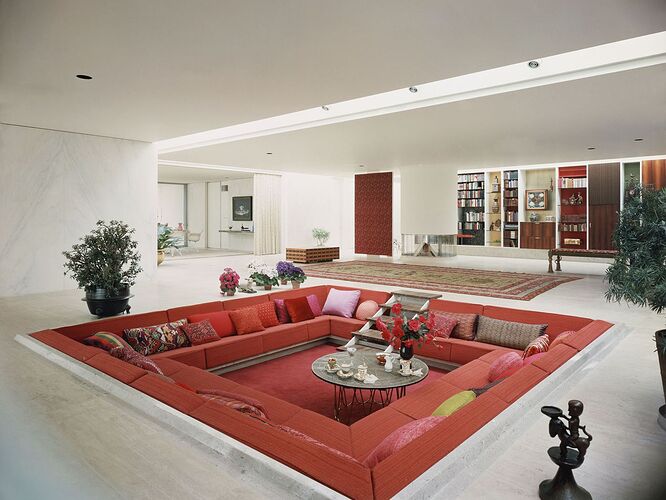 A 1970s style sunken conversation pit within a listening room would be AWESOME.

Hmm, but where would the speakers go?

When I compared B&W 802D2 directly with 45 year old IMF RSPMs and with PMC MB2 SEs, the B&Ws were the rejects. But I can’t say I can put a finger on why: very nice but just didn’t play the music inspiringly. All were fed by Bryston 4B Sst2 amp in same room.