I have a Naim 02 tuner which I tend to use for R3 broadcasts but I have not made much use of it because I have never been particularly happy with the performance. I think it is mainly due to weak signal/ineffective aerial with drifting off station. I have read positive and negative comments about Ron Smith Galaxie aerials and wondered what members thought. Are there better aerials for example?

Thank you in advance for any considered opinions.

Can’t comment on alternatives but I had a Naim tuner and reception was rubbish (we lived in a valley) until I installed a Ron Smith’s galaxy aerial. It made a massive difference to reception. The aerial almost filled the loft though.
Scott.

I used to know Ron Smith when he had his aerial shop in Luton (I’m from Luton originally). I remembered him be be a very nice guy who knew his stuff, and was generous to a fault, showing me how it all worked with his FM tuner in his shop. I must have been about 9 or 10 at the time

I have a RS Galaxie 14 on my NAT-05
Nothing finer for FM reception, its about as quiet & high performance as any on the market. Comparing it to a well regarded 5 element I used to have, on R3 its totally hiss free. The circular dipole & the F/B elements pick up both horizontal & vertical transmissions & the G-14 has a very wide 55 degree acceptance angle so its great for picking up various local as well as the main transmitter.
Mine is attic mounted & I’m only 5.6km (3.5 miles) from the main 46kW transmitter, so it should be good - damp string should be good. As a better indicator of reception abilities I can get Sutton Coldfield’s 250kW BBC’s from 106km (66 miles) distant & thats 40 degrees off beam, but R3 does have some hiss.
The downside is although its one of the shorter Galaxie’s its the same width & height as all the others & is a big array on a roof. Mine does fit OK inside the attic & fortunately my roof line is more or less where I want it for the main & other local transmitters so its easy to assemble in situ.

Steve, Naim have always recommended Ron Smith aerials for use with their tuners, and many who have visited the factory have seen the big Galaxies mounted on the original factory building. If you can accommodate one then I’d say it’s a must on your NAT02. Are you sure the G14 is enough though? A G17 might be a better bet or even a G20 or G23 if reception is particularly weak where you are, but be careful that you can take such a big aerial as the wind loads are high and there may be other issues that require permission. I would contact Ron Smith Aerials to discuss what would be best for your situation.

Steve, re Richards concerns with signal strength. If you are OK with it I can plot the signal path from the main TX to your location if you’re OK with telling me where you live - just the city town name or 1st part of post code is all OK.

The G14 is very good but required planning permission and was only allowed on the back of the the house. We only discovered this once we installed a G17 on the apex and a neighbour complained. Rightly so in hindsight as it looked absolutely ridiculous. The council would not allow the 17 anywhere so we chopped a bit off and made it into a 14. We tried it inside the loft but it was hopeless.

Absolutely no doubt the Ron Smith aerials are the best you can get but, IMO, they do look absolutely ludicrous on top of a house and, where I live, I can guarantee that almost all of my neighbours would be up in arms. I also wonder if it might serve to advertise that one has a valuable hifi inside. For those reasons I went with a 5 element Yagi which seems to work well with my NAT01.

If any burglar knew what it was, I reckon he’d more than likely think you had a load of obsolete junk in there, and try your neighbors instead!

I have an Orion 8 (6 reflectors, a circular and 2 direction elements) feeding my NAT01 and Unitiqutes.
I live on a ridge in the Cotswolds, so unlike OP I have a good line of sight to several transmitters. Although some of the elements are wonky, I’ve had the aerial 12 years and it is favoured by pigeons and blackbirds, it provides an excellent signal for R3 and R4.
I looked at cheaper alternatives but none provided a suitable signal despite my good location. I would endorse the use of Ron Smith aerials.

If any burglar knew what it was, I reckon he’d more than likely think you had a load of obsolete junk in there, and try your neighbors instead!

Even if they wanted HiFi, I don’t think they’d fancy their chances of a quick sale of an FM tuner for cash down the local boozer.

That reminds me of the time when some burglars attempted at breaking into the Naim factory. It seemed that what they wanted was a Plasma screen. However, what they totally ignored were the four NAC552s with their 552PSes on a trolley just beside the boxed plasma screen.

They are simply not good in listening.

Thanks everyone for you time and thoughts regarding a suitable aerial, and special thanks to you Mike-B for your very kind offer. My current aerial is mounted on the back of the house and unlikely to attract much attention I would have thought. Thanks once again everyone, much appreciated.

Thanks for your kind offer Mike-B my postcode is RH1.

There is also a small infill TX very close at Caterham
Radio-3 is on 91.9 MHz
Its less than 10km from & on a similar heading of 60 degrees but its very low power at 15W & only vertical polarisation - OK for cars 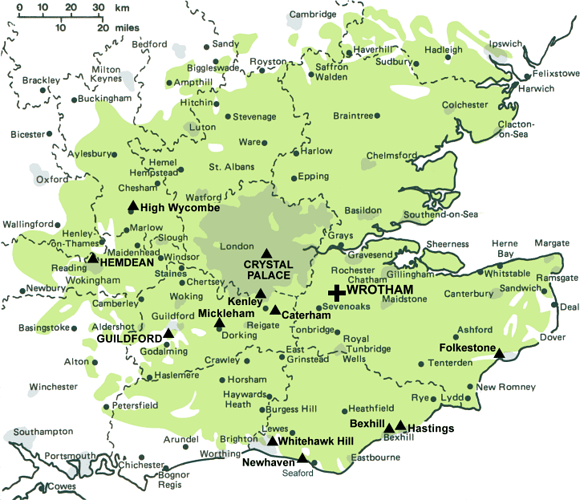 Hi Steve, for much of the UK you don’t need an extravagant aerial for broadcast VHF.
The key thing is ensuring you have the right gain for your location and tuner sensitivity (including coax loss)
A good aerial installer will advise for your listening action and conditions… but do ask that they are competent for radio.

For strong signal locations a three element Yagi will be fine… moving to 5 elements for upto 40 miles away from transmitter. Be mindful, the higher the gain (more elements) the more directional the aerial will be. This is not always desirable, where you have multiple transmitters such as local and national transmitters… so a compromise may be required and your Yagi focussed off beam or focus on the stations you will listen to most … like BBC Radio 3

If you have tall buildings nearby or sources of interference, then more extravagant aerials are sometimes required such as the Galaxie aerials to increase off beam rejection and reduce multi path reception… which can affect stereo decoding.

The aerial needs to be in the clear off the roof line, and using a quality coax. The aerial, if a Yagi, and connected to coax, should be connected to a Balun. This converts the balanced aerial signal to an unbalanced signal suitable for coax. Again a competent installer will know this… they may make an effective balun by looping the coax half a dozen times or so by the aerial feed point … this can be effective.

Also consider the wind drag/loading for larger aerials, and for 5 element Yagi I would go thick walled 1.75” to 2” diameter support … it’s what I do. Beware of cheap thin walled aluminium poles… again your fitter will assess for you.

. And I am enjoying my NAT03 right now

Cheers Simon-in-Suffolk for your advice. Much appreciated.

I haven’t experienced many tradesmen admitting incompetence when asked…