If you haven’t spotted it, there’s a new Roon 1.7 release.

Check this one out:

The recommendations of similar albums are bringing me down some great rabbit holes and introducing me to music I’d never otherwise have heard (well today anyway).

Me too, I especially like the ‘new releases for you’ section that appears on the overview page.

Like the new features and more so @Sloop_John_B guided me to find them on the mobile app. Not so sold on the new UI and bold theme though, and settings menu feels a bit off now, at least on a pc it does. The internet radio update is welcome and was much needed, still work to add in more stations but I am sure that’s a constantly growing thing.

Hardly the biggest change but I also like the new customisable room/zone icons! 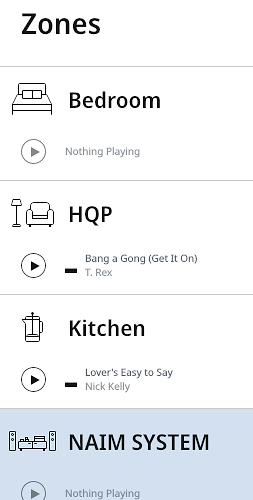 listening to a bit of Nick Kelly I see, know him for years as we grew up a few houses apart

Definitely one of the one’s that got away, though I see his film career is going well.

Where is this option at for customizable zones? 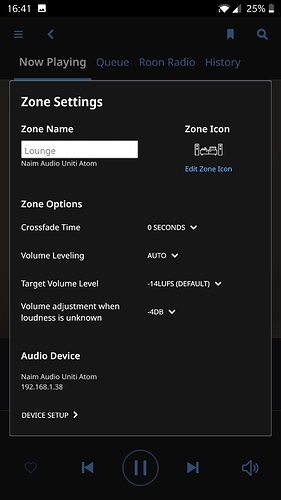 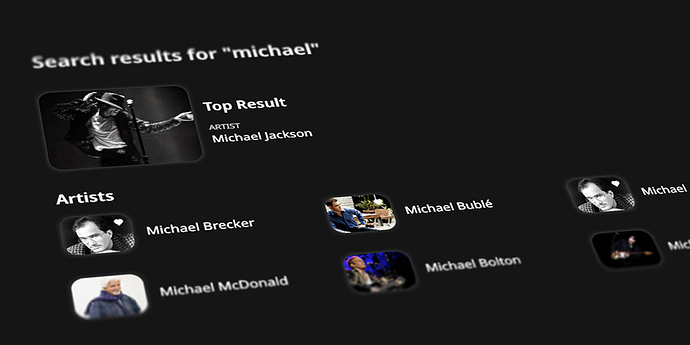 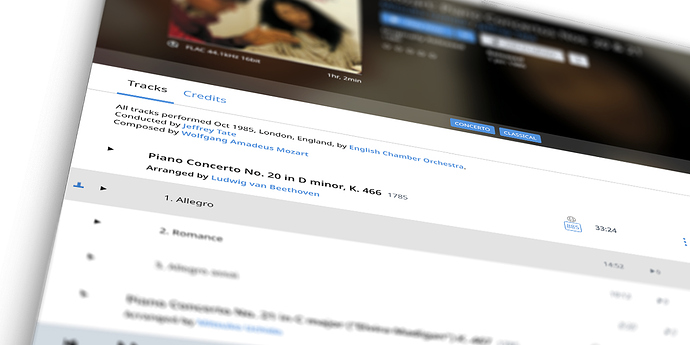 Sort By Most Popular 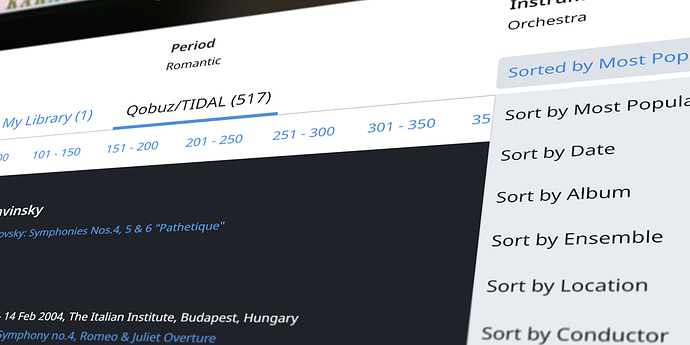 Most importantly, Vālence uses the community’s listening history to allow sorting by popularity, so you can benefit from the expertise of other listeners when choosing performances of a composition. 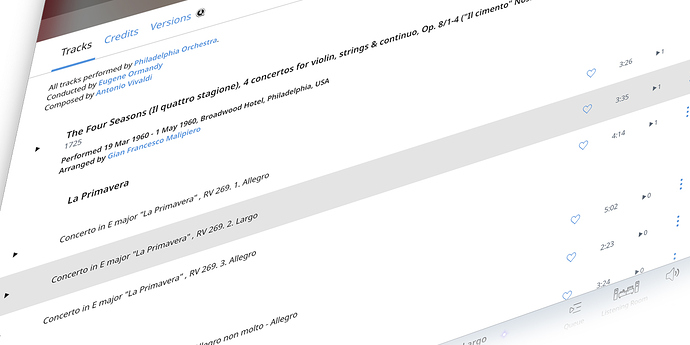 Roon now supports multi-level compositions, which are particularly useful for opera where many compositions include Acts in addition to parts.

When this data is available from our metadata providers, it will now be properly displayed on the Album Details page. It’s also possible to populate this data by using the SECTION tag in conjunction with WORKand PART tags. 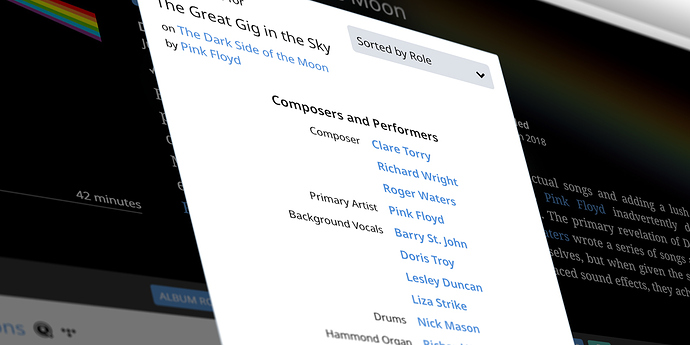 Vālence has considerably increased both the coverage and quality of credits in Roon. Over 44 million additional credits have been introduced to fill gaps that existed before, and the roles associated with those credits are more consistent and accurate.

We’re thrilled to launch our Live Radio directory, a collection of more than 1000 live radio stations, hand curated by the Roon community. Now you can browse stations by genre or quickly find your local stations.

As with all streaming content, live radio can be added to your library for easy access later. Remember, the directory is an actively maintained database; if you have questions, suggestions, or if there’s a station you can’t find, let them know in the Live Radio category on our community site.

For music playing from TIDAL and Qobuz, Roon now buffers data in a less disruptive way, and there are optimizations which reduce disk activity, CPU usage, and memory traffic. This means that streaming content starts faster and slower internet connections (or lower-powered cores) may also benefit when streaming high-resolution content.

When playing on an Android device, Roon now plays in the background with metadata and transport controls available in the Android “notification” area.

Roon performs more gracefully when the state of an Android device’s audio output changes, including when a phone call is received, when a headphone cable is removed, when a video is started on Facebook, etc. Signal Path will also report exactly how an Android device renders audio. Like most Android apps, Roon depends on the device to set sample rates.

Note that we now require OpenGL ES 3.0 support on Android

Starting with Roon 1.7, when running on Roon OS, Roon will use the Microsoft .NET Core Runtime, which offers higher performance and improved memory efficiency.

Roon OS has always been the best way to run Roon for most users, but as of this change, we are confident that it is the best option for everyone, regardless of library size. Roon on Roon OS is now more efficient and performs better than Roon on any other platform or product.

Roon has always included custom icons for Roon Ready and Roon Tested devices, but today’s release allows for more customization for the Roon zones around your home, with more than 40 zone icons included.

Roon can now automatically create “ Roon Tags ” from special file tags at the album or track level. This is a hugely flexible mechanism for the importing of nearly any external organizational system right into Roon.

This release also includes support for importing lyrics and credits from file tags as well.

Vālence technology is helping us integrate 44 million new credits from our metadata sources, but we’ve also done a lot of work to ensure credits are being handled consistently when they’re coming from your file tags.

This means Roon is now much better at understanding different kinds of credit roles, ensuring consistent handling for both. For example - “Martha Argerich - Piano” and “Argerich, Martha - Pianist” are now both be imported properly.

Tonight’s release expands our support for importing credits from file tags. This fulfills a feature request we’ve heard a number of times over the years.

Tonight’s release will import credits from the following file tags:

As long as the content of those tags meets one of the following formats:

Information stored in the Comments field will now be displayed on the File Info pop-up. This gives easier access to a field commonly used for storing information about the provenance of a file, including download sites and ripping information.

Roon’s font and color rendering has also undergone a major overhaul. Across the app, on all platforms, text shapes will appear cleaner and smoother, and the intent of the font is better preserved, improving readability. Additionally, the coloring of album covers should feel truer to the physical media on a wider range of LCD monitors.

In addition to looking better, Roon now has complete support for right-to-left scripts such as Arabic and Hebrew. Faster performance in the user interface and less resource intensive rendering makes a significant impact, especially on tablets and phones.

The Settings screen has been redesigned, with the Audio tab in particular getting a new look and feel that makes it easy to configure your endpoints.

By popular demand, we have also redesigned how deleting works – it is now much, much easier to delete content from your library.

Keep in mind that deleting local files in Roon is permanent , and deleted files will not go to the Trash/Recycle bin. Let us know what you think of this change!

This release also includes 2 changes on the album screen.

First, multi-disc sets up to 200 tracks will now get a new All Tracks tab. This view will allow you to view the entire album in a single list, which should ensure better presentation of multi-part works that span multiple discs.

Secondly, we added a new display setting. Going forward track numbers will be hidden on the album page by default, although it is possible to toggle them back on using the new setting

We’ve also fixed some display issues related to how paths are displayed on the Versions tab and the display of composers and lyricists on track rows.

Hmm possibly but it mimicks a squeezebox doesn’t it, I can change my Squeezebox radio icon, its in the kitchen so thought the pan was appropriate. You have updated your remote app ? 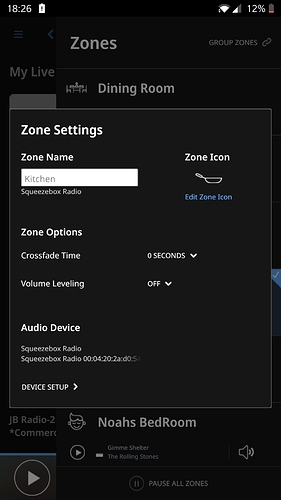 I have noticed that past week that Roon Radio was doing a better that usual job of picking material to my liking (been on a classical bing and a country bing). Got a message today that they have been testing a new thing called “Valence” which addresses the selection. I must say that I think its working very well.

I had a trial play with Roon running on my QNAP to an Airport Express endpoint to my SuperUniti. I did enjoy the experience but decided it was not worth investing in it while the old streamer is not Roon compatible. And I can’t stream any of my high-res and DSD music without downsampling. Unfortunately Roon doesn’t support Amazon Music HD either, for time being, which I use. so I’m also limited to my own library in Roon. Was hoping that maybe 1.7 would fix some of these issues. Oh well, I’ll stick to Radio Paradise for my new music discovery

Finally in Room 1.7 I can control streaming quality from TIDAL. Now I can force Roon to stream HiFi Quality (CD) to Naim DAC or Chord Qutest or Master Quality (MQA) when I using other MQA capable DACs.

Any views on SQ? I haven’t listened yet but I see views are being expressed elsewhere that SQ is better. Thanks

Cant say I notice any difference, maybe on lower end cores it might make a difference as they made some optimizations. But then I have pretty bad cold at the moment that’s effecting my hearing so not the best judge ATM.

Did the upgrade yesterday evening…without listening too long, I would say YES! It’s SQ improves- it’s has a darker backround, better dynamic and clearity. Would say that’s on par with UPNP access now. (I tried roon vs UPNP minimserv on NAS several times, UPNP was more relaxed and clear!) Highly recommend upgrade imho.