Those of you who have read my previous posts will know that I have not been 100% behind the Roon concept.
I had a couple of trials and still couldn’t decide if it was for me so, I went for a 1 year licence and was convinced that I wouldn’t be renewing.
Yea but, No but , Yea but … this situation continued for months until ‘Er Indoors had enough and unbeknown to me bought me a lifetime licence … just to shut me up.
So now I’m in and the ££ have left the bank account, I had just as well make the most if it. It wasn’t an easy purchase, she saved for months in order to do this. It seems someone loves me.
Not particularly happy during the trial, running the core on a Mac Mini (2010) which worked ok, I dropped the extra few ££ and bought an 8 series i5 NUC, 120 M.2 SSD for ROCK and a 2Tb SSD fitted internally for my music library (2/3 full). A dedicated system, along with a Cisco 2960 switch used just for music, nothing else.
It’s working great and now the ££ has been spent (

) which was a major consideration and certainly one of the main reasons why I procrastinated.
Some of us are not blessed with significant resources to plough into a ‘hobby’ and I am grateful for the effort and sacrifices she made for me.

Make the best use of it. I really need to go full hog, 3 years in now it makes sense as I am invested with so many endpoints in all rooms except the bathroom ( on the list though).

The 2nd generation Musos are going to be a good way to exploit the Roon multiroom architecture, and reduce reliance on Naim’s proprietary multi-room approach, while still staying in the Naim family.

MeToo going on here. I have also given in due to social pressure (have the same UI as friends getting systems) and using existing possible endpoints. Ok then, as long as it only run bitperfect mode.

My issue is I have a Mac Mini as well with a SSD drive (and a Cisco 2960) etc but I’m wondering if going with a ROCK would improve performance. I like the idea of always-on but not sure its worth the expensive for me as my Mac Mini works flawlessly.

My issue is I have a Mac Mini as well with a SSD drive (and a Cisco 2960) etc but I’m wondering if going with a ROCK would improve performance. I like the idea of always-on but not sure its worth the expensive for me as my Mac Mini works flawlessly.

I had Roon running on a Mac Mini with SSD. I built a NUC (NUC8i7) to replace it running ROCK and have never looked back. I can’t say it sounds better, but I can say it works much better. Once set up I forget it and enjoy it. And I don’t have to worry about it when I’m using my Mac Mini for other stuff. Cost me about $600, not including the 1 TB SSD (about $120) I brought over from my Mac for audio file storage.

I can’t say it sounds better, but I can say it works much better. Once set up I forget it and enjoy it. And I don’t have to worry about it when I’m using my Mac Mini for other stuff.

Exactly my experience - you free up the mac mini (in my case a new 2019 model) for other uses. Follow Roons advice and keep the server as far away as possible (in another room) and there was no audible difference.

Thanks guys. I’m likely going to do it. I really do like the idea of freeing up my Mac.

Or get one these 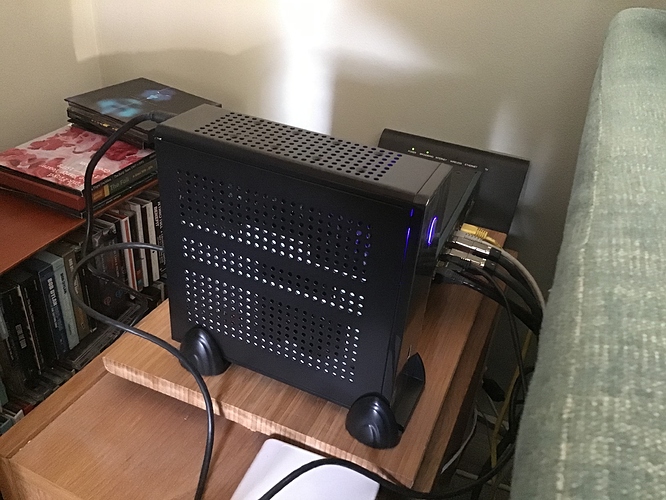 Roon Core and endpoint, including over UPNP if you prefer, plus storage. It’s £700 or £400 without the 2tb SSD.

I can recommend swapping a Mac Mini for a Nuc.
Easy setup, plug in and forget. Haven’t touched mine since I installed it.
For me there was an upgrade in sound. Why, I’m not sure and frankly I don’t care. It works for me.

FWIW I run my Roon Core on an iMac as a back ground process. Really straightforward, and invisible and just works, even when iMac is in standby. I can see the processor load and it is hardly registering with PCM. Even DSD DSP filters, if I were to use is, not much of a load.
I ensure my iMac can use IPV6 as Roon appears to prefer that if it can use it, and appears quicker and more reliable with endpoint discovery compared to IPv4 which isn’t surprising. In my setup, it’s sadly only Naim endpoints that don’t support IPv6

I run IPv6 throughout my house w/no issues at all. Good to know it will discover things faster. I’m still considering a separate machine(ROCK) to hold all my music but it’s not a huge rush as everything on my Mini is lightening fast and stable (Cisco 2960 etc). When/if Naim supports IPv6, I’ll be ready for it.