I think there there is probably little to no point using Roon if you don’t also use Qobuz or TIDAL. I have a library of stored music that is also integrated with Roon, but it’s the integration of a steaming service and Roon Radio that makes it truly compelling.

I hated Roon Radio and had to turn it off - because I dislike random selection of music, especially isolated tracks from albums, even when, as it was, drawn from my own collection. But I accept that some people happily listen to disconnected music, or choices not based on current listening mood.

The way Roon Radio works you have to give it a chance to learn. As you play music, and as you accept or reject its choices it gets smarter about what it thinks you might like. Data mining and AI has come such along way. Now after a year of using Roon I can let Roon Radio play and it mostly picks good music. I have also discovered some new favorites and rediscovered some old forgotten ones as a result. It’s a really nice feature but it’s a playful puppy out of the box and needs to grow and train to be a loyal companion.

I doubt not if you only like playing full albums, and music to suit current mood…

I too mostly prefer playing full albums, but when I’m working or just listening to the main system casually, I’ll play Roon Radio. Then when something it plays strikes me I pull up the full album and play that. If it’s a winner it gets added to my Roon library. Lots of great stuff is now in my library I might not have ever thought to give a chance otherwise. It’s brilliant, IMHO.

Ditto. Roon keeps me for the DSP and the interface of course.

If you do not use it every day, then I say cancel it. You can always come back to Roon whenever you feel like it.

I think that is good advice… when it came close to my renewal, I tried abstaining for a while, and I missed it, so that made renewal easy.
The aspect of Roon I really appreciate is that it merges my library into a hybrid library or catalogue… and my mind set is then more about enjoying music recordings and their relationships with each other, rather than having to think about CDs or where media file copies are stored etc… it is quite a liberation, and going to back to thinking about physicals and locations of content is quite an inconvenience, and dare I say retrograde step, which ultimately constrains your listening.

Do I think Roon is expensive for what it does… yes, but it does it well, and better than anything else I have tried… so I guess it’s the price I am willing to pay.

I was impressed at first when starting the 60 day trial given by Qobuz. I enjoyed it a lot as to be able to reach and play all my downloads of which I had not edited metadata yet before getting them on the Core. I thought at the time wanting to go lifetime at the end of the trial period.
Then came Qobuz native. I realized that I was far more interested of course in music and SQ than in any other functionality or playful gimmick. Something was even bothering me still with the Roon’s layouts and like you, I wondered over the last 48 hours of the trial but let it go in the end. I wondered another time and realized that I didn’t need Roon or Audivarna after all. I am very happy today that I did not subscribe to any of them maybe even more for the principle of not succombing to the easy way or to a compulsive purchase.

I don’t think it’s massively expensive compared to other subscription software models, find it’s suggestions occasionally revelatory and enjoy being able to easily follow the performances of musicians on given albums elsewhere. None of it’s perfect (but then neither am I) and it keeps improving…

I couldn’t live without Roon. I’m glad I bought a lifetime ages ago. My cheapest cable costs multiple lifetime Roon(s) and is not nearly as important as Roon for the enjoyment of my music. No-brainer for me.

I bought a lifetime when it was $500. Even though I have many issues with the software, the one I will never have is whether I need to ask myself this question.

Me too, and I’m glad that I did. I just wish I’d done it after the trial period rather than after a year of use. I hadn’t realised they’d put the price up to $699, that’s quite a lot of money really; it might have been enough for me to give up on it. Maybe.

Used it last night, and Roon Radio can be interesting in reminding you of older tracks you’ve not heard for a while, but most of the offerings were dire compared to previous experience.

Earlier I played The Weeknd’s popular Blinding Lights, Mrs AC and my daughter were in the room.

Mrs AC then asked me why I was listening to the next track Roon radio played - frankly glad my young daughter had left the room when the artist started singing about all manner of intimate acts - I’m no shrinking violet langauge wise but I found it disgusting. It’s the highglighted track below.

How do I ban a song in Roon as hovering over the heart suggests, seems to only enable/disable as a favourite AFAICS?

I bought a lifetime when it was $500. Even though I have many issues with the software, the one I will never have is whether I need to ask myself this question.

Me too, and I’m glad that I did. I just wish I’d done it after the trial period rather than after a year of use. I hadn’t realised they’d put the price up to $699, that’s quite a lot of money really; it might have been enough for me to give up on it. Maybe.

Two things Roon did annoyed me:

1 - Removing the My Purchased Qobuz section - other apps have it, just don’t merge the list with the library as you may have it stored locally.

2 - No warning of Lifetime price hike and no grace period/warning for existing subscribers to upgrade, only trial members - I’d subscribed for a few years and was considering it - unless you frequented their forum you would not have known this might be changed/withdrawn.

Pricing still suggests you can ‘always convert to a Lifetime Membership’ - clearly wrong if they withdraw that option. 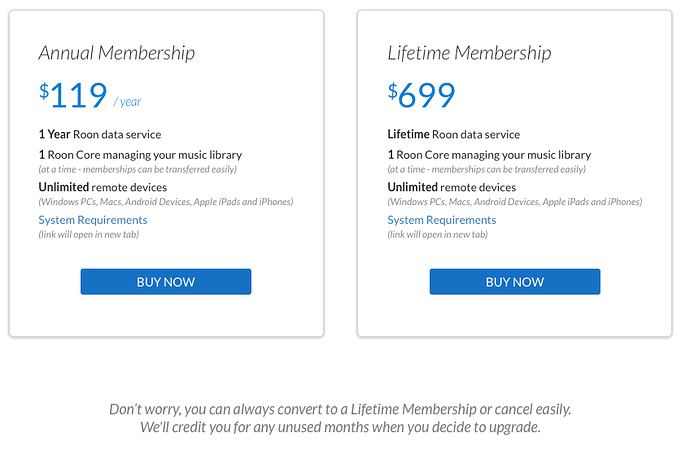 Absolutely agree on this.

I think there there is probably little to no point using Roon if you don’t also use Qobuz or TIDAL. I have a library of stored music that is also integrated with Roon, but it’s the integration of a steaming service and Roon Radio that makes it truly compelling.

I don’t agree here, for me the rich meta-data and the links between artists is a source of music discovery plus education- I’ve learnt lots of stuff/trivia I didn’t know (for example, Alison Goldfrapp sung on a Bryan Ferry album) and it’s helped me identify stuff I’d like to listen to.

I don’t use a streaming service (well, OK I use Spotify with my mobile), only Roon with ripped CDs. I think I probably use this for about 90% of my listening with the other 10% being vinyl.

I’m also quite happy with Roon’s random play of stuff in my library.

Still surprised the price has gone up though.

There’s plenty that annoys me about the Roon software, UI stuff mostly. That said, it did get me excited about music discovery again, and the ability to integrate local with online favorites into one library is the key factor for using it imo. I don’t use any of the upsampling or DSP features.

If you don’t use a streaming service with Roon, but like it for its metadata features there are less expensive ways to achieve that. But if you like Roon and don’t mind the expense I agree it’s a nice platform.

To me Roon is compelling for its ability to integrate multiple sources of digital material into a unified whole, and for its ability to discover new things that specifically aren’t in my library. If all I were using is my stored music and neither Qobuz nor TIDAL (the only two services it supports so far) I might instead just use some other software I can buy outright, for less than a single year subscription to Roon.

I disagree. Although I have a Tidal subscription, I have it switched off most of the time. Roon does a magnificent job of bringing me through my library, and entertaining me. My library is ‘only’ 2500 albums, but I’ve seen no other software which can open it up so expertly.
When I recently re-ripped my 2000+ CDs, I realised afterwards that I could not have done that without Roon’s features for identifying and deleting duplicates

I’m not trying to argue with you about it. I’m just stating my perspective, which is that without an integrated streaming service, what’s compelling (to me) about Roon becomes irrelevant. I would in that case go for a cheaper option (like JRiver for $60). But that’s me. Enjoy Roon. I do.