Updating Roon (on PC) core and Roon apps (on

Thanks, @CrystalGipsy. I will follow that thread over there, too …

Yes, I did both but did the core first

Yes to both. There was an update button popping up last night, but it seems to have disappeared now.

I already did - unfortunately without any success …

You are signed into Qobuz or Tidal, yes? No mixes with local music

They seem to come and go. After the update yesterday I scrolled up and down the home page a couple of times and they weren’t there…then they were. Today when I opened Roon they were gone again, but after leaving the home screen then returning, they were back. That’s on OSX.

You can update if you didn’t already by going to about section in the settings menu . Apps update from appstores.

How often do daily mixes change? Not daily, it seems.

I’ve got the update working, and the discover page, but no daily play;sits, just the Tidal and Quobuz ones……

Probally won’t work cause it’s winter down under

Hmm I had daily mixes yesterday but today they are gone?! Tidal maybe sued them

Roon….Still one of the best Hi-Fi related decisions I’ve made. Looking forward to having a listen to the mixes later. 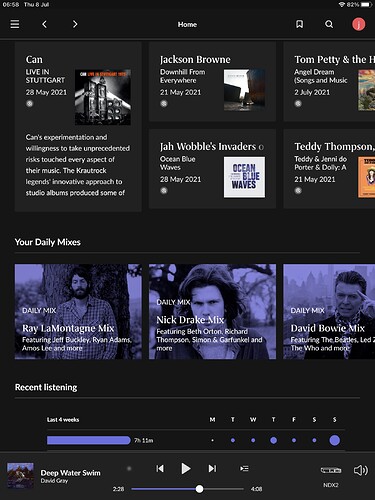 They seem to come and go.

Yes same here. It seems to me it’s confused about the time of day. The announcement says “Some days you want a little extra inspiration in the morning”, but both yesterday and today they were not there in the morning when I looked (8 a.m.) , but appeared some time until 9.

Gone… as in changed or no daily mixes at all?

Mine have stayed in place (Roon Rock NUC), other than the fact that they have been refreshed today with a new set of daily mixes… as one would expect. Enjoyed yesterdays and looking forward to todays!

The daily mixes seem to come and go as they please! There is a thread going on the Roon forums.

I suspect that the mixes are being loaded from Roon HQ and if the data doesn’t arrive quickly then the display of this is skipped.

It’s a most welcome feature though. I have music playing all day in the background whilst working from home and internet radio and Jazz FM was being very predictable so this is another thing to use.

Still no playlists here in New Zealand. Maybe it’s the “almost daily, and not in your timezone mix”……

Mine have changed every day so far. But it was missing in the UI this morning. Did a Qobuz resync and it showed up. I think there is a bug with their updating on the next day thar stops it showing up.

I do have issues with the lists though. Some are repeated artists throughout, without the primary artist they are based on and some are just a few artists repeated a lot. Got a support thread on this. Others have it to. So not a great rollout of this feature thus far.

I suppose you’ll never please everyone with a mix I find listening to them is actually better than looking at them and the few I have listened to have worked well.

It’s not an earth shattering addition but I quite like it as I have had time I’m scratching my head as to what to listen to.
I’d still like to have a random pick button -an I’m feeling lucky if you like, which would just play a random album from my collection.

There is an extension that does this but it’s a bit less than intuitive. It did pick Kirsty McCall last night though and I have been thoroughly enjoying listening to her 3CD set from Croydon to Cuba which I really had ignored in my collection.