I was prompted to open this thread after reading the thread currently running on Eric Clapton.

In my last few years at school - more years ago now than I care to remember - I bought the first couple of albums (on LP, of course) by the American guitarist Roy Buchanan (from Rose Street Records in Edinburgh, which seems to be no longer trading).

He was described at the time (late 1960s/early1970s) as ‘the greatest guitarist that no one has ever heard of’.

Anyway, I went onto Amazon, and was dismayed to find that his LPs have slipped out of the catalogue.

That is a major bummer, as they are wonderful records.

A sad footnote is that Buchanan died in a prison cell - found hanged. Arguments persist whether this was a suicide or not.

Even Hendrix looked up to him, a great guitarist.

I don’t have any of his albums but I saw him live in the seventies at a relatively small venue near Toronto with John Mayall as well. Good concert.

I’m envious. I doubt if he ever played in the UK.

It was a very nice outdoor venue and we’d camp there for the weekend and the bands would play for quite a bit of the day and evening. And it was back when the bands were just getting known. One of the other weekends was Max Webster and some other bands. Max Webster was, of course, Kim Mitchell in his early days before he played large venues.

Record collecting - you’ve got to snap it up whilst it’s available - once it’s gone it’s gone. Lucky to have picked up most of Roy’s albums. 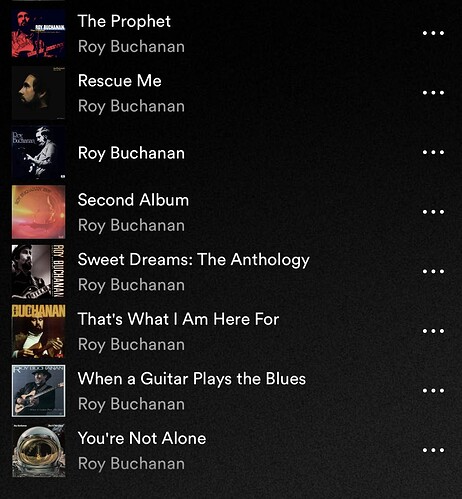 I’m a big fan and still listen to his music quite a bit. Quite a few of his albums are available from a combination of Qobuz and Tidal.

I believe Jeff Beck has mentioned Buchanan as being one of his greatest influences. Have a listen to Buchanan’s “The Messiah will come again” (from the album “Roy Buchanan”, 1972) and you will hear this for yourself. He is one of the few guitarists who could match the tone and phrasing of Beck.

I understand now the importance of keeping records in pristine condition. But I had the Roy Buchanan albums as a teenager in a boarding school, with only a crappy Dansette type record player to play them on, so they got knackered pretty quickly.

If I had had 20/20 vision into the future, perhaps I would have bought two sealed copies of each of the records that I liked and kept one sealed to play on my lovely LP12 deck in the future. Problem was that I didn’t have that foresight, the LP12 didn’t exist, and I couldn’t have afforded to buy two LPs of all my favourite music in any event.

Trying to think back, I’m not even sure if you could buy such a thing as a ‘sealed copy’ of a record in those pre-buying-from-Amazon-by-internet days. You went into the shop, picked out the record sleeve, and the salesperson would put the record (which was stored behind the counter) into the sleeve after you paid.

But I shall know what to do when I get the chance in my next lifetime!

'The Messiah Will Come Again" is probably Roy Buchanan’s best-known recording (although that’s a relative term), along with ‘Wayfaring Pilgrim’.

I was blissfully unaware of Roy Buchannan when I was teenager. I was into the likes of CCR at that age. Nothing wrong with CCR, but your musical tastes at that age were obviously much more refined than mine.
I didn’t come across Buchanan until I was much older.

I rather like Creedence, but I don’t have any of their music. I might do something about that, so thank you for the prompt.

Saw Max Webster around that time in a bar in Brantford. Mitchell spent the time between sets hitting on the girl selling tickets at the door lol.

I have some CDs of his records. Some wonderful playing on there.

One of my favourites of his,

Every so often, I play his “Filthy Teddy” and “Sweet Dreams.” Amazing.
I saw him in concert at NYU once. He didn’t disappoint.

When people mention guitarists to me I’ve often said “what about Roy Buchanan?”. Only a few had heard of him but several were surprised once they’d heard him.

He is one of the few guitarists who could match the tone and phrasing of Beck.

Yeah, I agree. he’s the only one that comes close to Beck’s ‘feel’. I think that Beck’s playing is a little more soulful though.
JMHO.

He was a unique talent. The sounds he was able to extract from a Telecaster (it was always a Tele for Roy) were unique to him. His (management’s) choice of material was often a bit strange and that’s why so few people ever heard of him. Story was that Keith Richards wanted him for the Stones, but the others could see, despite his talents, that he wouldn’t fit.
Special player though.
YouTube his version of Sweet Dreams for a real treat.

First became aware of Roy Buchanan when he was featured on one of those flexi discs given away with the weekly music papers, probably mid '70’s. But to date, I only own the perfectly titled Second Album, which I was lucky enough to spot at a record fair.