some people carry knives with them,

I’ve encountered one of those before… they underestimated me, so it turned into a bad day… for them.

You can keep explaining how you’re correct while you’re lying in hospital.
I never experience such behaviour. Perhaps where I live and where I visit means I’m not at risk. Or you’ve just been very unlucky?

I’m not excusing the behaviour of drivers acting in such a way, but if a pattern forms, I’ll change what I’m doing in order to survive and not become Mr Angry.

Difficult to avoid a van you can’t see when you start crossing the road, or a car driver who goes to extreme lengths to intentionally cause trouble to a pedestrian. In neither case when I started to cross the road/junction was there any reason to expect a dangerous outcome.

The only change that would have prevented either of these incidents would be to no longer cross the road at all - strangely that’s not practical, particularly as I need to cross the road to get to any shops selling food.

Looks like this discussion may turn into a Handforth Parish Council meeting.

It should be borne in mind that pedestrians and horses have a right to use the road. Motor vehicle users are licenced and this license can be removed.

I understand @TRL 's view though as I received a ticking off during my advanced rider trading for standing up to a bully in a van when it was my right of way. He said “being in the right won’t stop you getting knocked off!”

You are very observant. I also find Volkswagon divers to be very agressive.
I just sold my sportbike, sniff, (I’m 65, it was time); and motorcylists also have to steer clear of Volvo drivers, at least in North America, anyway.
Cheers, rubber side down …

Cars to avoid are Audis and Volkswagen Golfs particularly GTi models. And of course any van not sign-wriiten.

Funny you should mention that. I was once sent flying from my bike on Regent St. by somebody making a reckless U-turn in broad daylight in, yes, an unmarked white van. They didn’t stop.

How wide is this road? How many lanes? How far to a safer crossing point? For example a Puffin crossing? Or a bridge/tunnel?

How wide is this road? How far to a safer crossing point? For example a Puffin crossing? Or a bridge/tunnel?

How far to a safer crossing point?
200m, but to get to that crossing I would have to cross a different road at relatively dangerous point (specifically a junction on a blind corner).

I think you may mean Handford Cheshire and not Handsworth Birmingham.

Yep, I can’t even blame the predictive text for this one!

I’m reliably informed that ACIAFA (pronounced assy-arfa) is unofficial traffic police radio code. It stands for ‘a piece of anatomy in a copulating Audi’, or something to that effect. 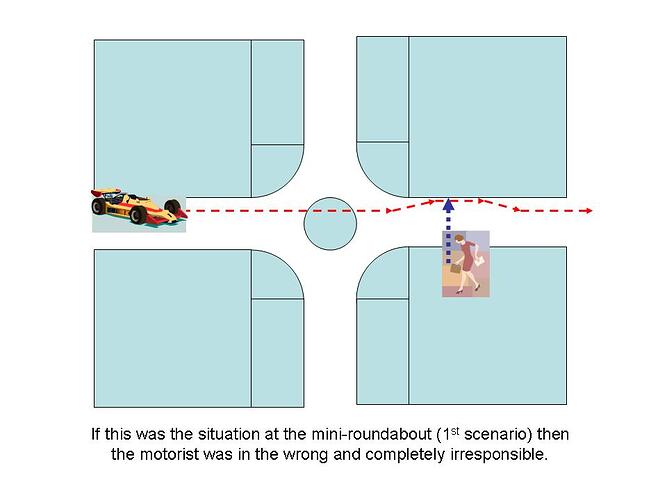 Hi Xanthe. Not my best drawing ! Is this at all representative of the first encounter that you described.

A motorist accelerated, passing straight over a mini-roundabout, then aimed the car directly at you, having to swerve to avoid hitting the kerb and damaging the car ? If the motorist hadn’t accelerated, and had also driven around the mini-roundabout, you judged that you had ample time to safely cross the road and you didn’t dawdle

If so, that motorist has not only committed a couple of motoring offences, but is menace to society. At least in my opinion.

Does this diagram illustrate your second encounter ? The van (red) is in a one-way street. It is approaching a left-hand bend. You and the van driver can’t see each other when you decide that it is safe for you to cross the road.

By the time you get 1/3 across, the van comes into sight. By the halfway mark you realise the van isn’t going to slow down to accomodate your safe crossing. 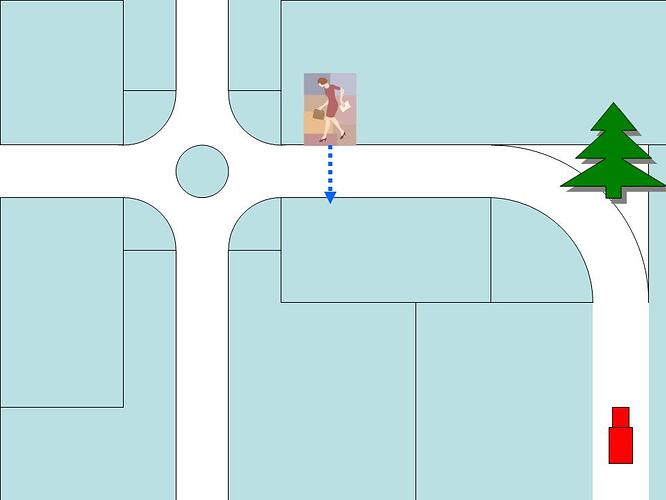 I felt like that when I had a company beamer , you wouldn’t believe the surprised looks, when I was polite waved people through etc.

When I got a green Mini , there were masses of incidents where people just didn’t see me. Most were Audis , sorry about that.

In the end I traded it in for a bright orange Mini , in later discussions with the garage they said "Oh you had one of the invisible ones ‘’

These days when I walk to the farm shop , I wear a bright yellow hat, bright yellow gloves, my shoes have yellow laces . When asked why I replied “So there are no excuses at the inquest”

I think the original post is about drivers behaving aggressively towards pedestrians. I too have experienced this in a central London street. Bizarrely a car with diplomatic plates emerged from a side street when I was halfway walking cross the road, and then accelerated towards me sounding his horn, as if to say “I will get you next time”. I don’t care what the Highway Code says, that’s not a nice way to behave.

A year or so ago I’d have said more aggressive drivers were generally Audi or BMW drivers.

In the last 18 months, especially in urban areas it seems to be all these Range Rover variants which are driven like speedy tanks, and seem complete overkill for towns and cities.

I’ve never really been a car fanatic so long as it gets me from A to B it’ll suffice but better is nicer of course.

I certainly enjoy responsive vehicles as I feel safer in being able to pull away from something potentially hazardous quickly, but what I simply cannot understand is why certain people have to behave aggressively in their vehicles by tail-gating or shooting down sliproads and overtaking you as you try to cautiously pull onto the main road/dual carriageway knowing there are vehicles you have to compensate for.

Most of the time it’s probably not intentionally aggressive just ignorant drivers.

Youngsters in particular, but far from exclusively, seem to lack the common sense to keep a sensible distance from the vehicle in front.

As for mini roundabouts I hate them. In fact I hate most modern spiralling roundabout designs, I think the older designs were far more logical.

Probably also driving on the wrong side of the road…

Yes, that’s pretty much it!

Correct: other than I was walking in the other direction.