Rumble. Acoustics of the concert hall?

I was listening to the Beethoven piano sonata below and I noticed a sort of low rumble, almost as if a large truck was going slowly past the house - it seems to be there the whole time.

I have never noticed this before, it disappears when I mute the music, and I have not noticed it on other tracks. Could this be the acoustics of the concert hall, or my room - I have put up some new pictures lately, could it be that - maybe Mr Horowitz puts out a lot more bass energy than most? 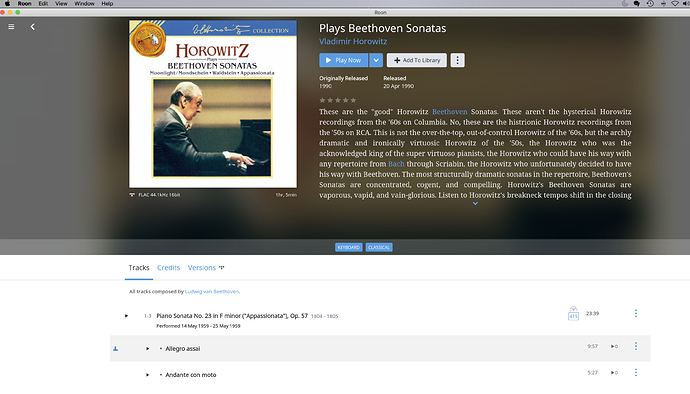 Continuous suggests something like a ventilation system, if it is the hall. Otherwise I have had albums with an audible mains hum all the way through (audible between tracks that is, or maybe just audible in the very quietest passages!) - that would have been from poor equipment or wiring at some point in the recording/processing chain.

You may be best hunting out some other recordings in the same venue - though of course it is possible others have filtered it out.

I have heard several classical recordings made in London’s Kingsway Hall, where you can hear the regular rumbling sound of passing underground trains during quiet passages - I do regard that as part of the atmosphere.

I’ve had a quick listen to this CD. The first sonata, recorded 1959, has some environmental noise external to the hall, occasional metro rumble and car horns. On the other two sonatas, recorded 1956, I hear less noise, a closer acoustic in a smaller room, maybe studio. Lots of tape hiss throughout. No venues indicated on Discogs listing.

I meant to add, thank you for introducing me to the recording, that is some powerful LVB playing.

Recordings from the Kingsway Hall in London could suffer from this problem - caused by the London Underground. I can’t recall if it was the Victoria Line!

Thanks for all your feedback, it has not been this noticeable before, and I am glad it looks as though it is just the recording.

Recordings from the Kingsway Hall in London could suffer from this problem - caused by the London Underground. I can’t recall if it was the Victoria Line!

It was the Piccadilly Line, the Kingsway Hall is near Holborn, I think it was the Aldwych spur.

Yes Piccadilly Line, but I think the main one, between Covent Garden and Holborn stations. That would fit with the frequency of trains, as well as the hall’s location (as was), though I do not have certain knowledge.