I have all of my pop/rock etc. CDs ripped and stored on a QNAP NAS and use Asset to serve them up to my streamer.
I’d like to rip some classical CDs but want to keep them separate. I can obviously rip them to a different folder on the NAS, but what’s the best way to serve them up as separate libraries? Can two separate instances of Asset run, or would I be better off handling the classical stuff with Minimserver for instance?

Asset will allow you to do just this, you don’t need 2 copies of Asset running, just use the Instances option. The 2 libraries will be seen as 2 separate UPNP Servers.

It’s useful as you can have different browse trees which can suit the differences between the genres. 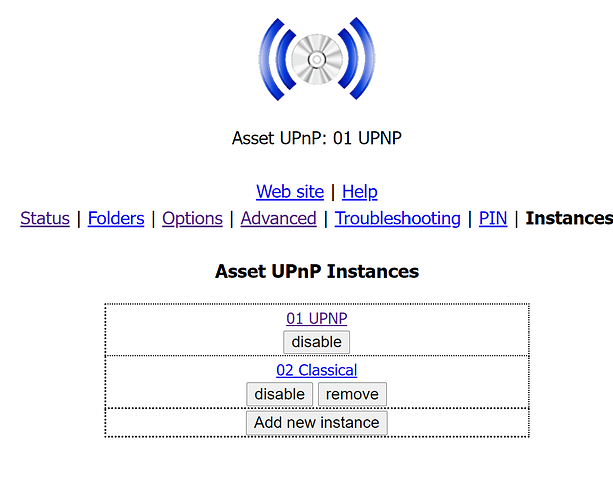 It’s perhaps worth noting that you don’t need a separate folder as UPnP servers are not searched by folder but by metadata. So it doesn’t matter if your files and folders are a complete mess, in this case you would just need to make sure that your classical music has a suitable genre tag and you’ll find it all there.

Yes but to make them appear as 2 libraries (instances) it would be easy to have the classical music in a separate folder structure.

Of course, but when Gavin mentions folders that suggests that perhaps he hasn’t appreciated that servers allow you to browse by genre for exactly this reason (as well as by composer, conductor etc.)

I also have a lot of classical music on my NAS as well as several other genres and personally find MinimServer indispensable for classical. There is a fairly steep learning curve with Minim and not everyone manages to climb it. But if you’ve the time available, you might find the investment worthwhile. Ripping all my CDs and sorting the metadata was a fun, if occasionally frustrating, retirement project for me.

Incidentally, I do not separate classical from other genres in a different library. One reason is that I have a fair bit of music which spans genres. For example, I’m listening to the new recording from the band l’Arpeggiate as I type and it’s hard to say whether many of their discs are classical or folk. So I label it with both genres and can access it through either of them. You’d lose possiblity if you have two libraries.

I disabled the music library on the NAS; a lot of time seemed to be wasted continually rescanning the library.

Same thing with asset, I couldn’t figure out how to stop it automatically rescanning. Ended up using miniserver, interface not as good as asset, but no auto scanning.

The nas sits quietly doing nothing, unless I initiate a scan or play music.

As Chris said, everything can be randomly dumped in a folder; the server locates the music you want to listen too. You don’t need a library.

Your idea of using miniserver for classical and asset for pop/rock seems an excellent idea, and easy to set up. Just drop classical randomly in one folder, pop/rock in another.

I appreciate what @ChrisSU is saying - I do realise I could do that using genre or composer all within the same libarary - but I do most of my browsing (normally) by Album Artist and this would still be mixed in with the classical stuff.
For the moment I’ve gone with @trickydickie’s suggestion and created a second instance within Asset - it seems to work perfectly. I just need to cut down the browse tree to one or two options. There won’t be a vast number of CDs here by the time I’m finished, only 50-100, and my listening to classical is really only very occasional.

As Chris said, everything can be randomly dumped in a folder; the server locates the music you want to listen too. You don’t need a library.

Perhaps one doesn’t need a (folder) library … but, being a geek - I maintain an Excel worksheet listing my 78,000+ tracks - the folder library structure is essential so as to reduce the time required for reconciliation when a track or two goes missing

Not sure it’s an hobby in my retirement … more like a way of life!

I’m intrigued by the suggestion of having a second (or more) Instance. I wasn’t aware of this facility and wonder if it would be useful (to me). The majority of my music library is classical and film soundtrack where the Album Artist is the composer but I do have a large number of easy listening albums where the Album Artist is the performer. Searching under composer is useful at times but given the vast number of composers & lyricists this is far more time consuming than searching under Album Artist.

Sounds like this is the reverse of my situation, and the two instances would work well.

I too have my stuff in a folder tree; my original references ought to have been to different root folders to keep the pop / classical separate.

Despite my earlier comments I can see that running two instances of Asset could work. Maybe even take it a step further and use Minimserver, which is many peoples first choice for classical, and give it access only to your classical music folder.
Another option would be Roon, which maintains its own matadata for your collection but gives you the option to use your own tags for any album you want.

Easily done in Roon with focusing on genre in albums. Or by adding a specific tag to all my classical albums and focus on that. No separate libraries or databases to maintain just one, no separate folders needed either but I could use those to do the same in Roon.

I can also go further and filter via compositions, composers etc. I don’t see any other music in this view of my albums. This view can be saved and brought back with a simple click.

Yes, I can see the logic of running two instances of Asset, or, as I do, running both Asset and Minim. But I still don’t see the point of separating classical from other genres. It seems to go against the whole idea of metadata searching, which is exactly what Asset and Minim provide.

But I still don’t see the point of separating classical from other genres. It seems to go against the whole idea of metadata searching, which is exactly what Asset and Minim provide.

If you rip classical exclusively to one folder and use minserve to exclusively stream from that folder, it will ensure access to every classical album ripped, without relying on metadata.

Sure, but I’m not sure why I’d want to avoid using the metadata. The only reason I guess is that the metadata is in a mess, which is why I try to be scrupulous in getting the metadata right when I add albums to my music store.

I guess it’s ultimately a matter of personal taste. I also use metadata and metadata searching to access my large collection of photos, so perhaps I am just used to that way of working.

But I still don’t see the point of separating classical from other genres.

For my normal listening I browse by Album Artist, and I just wouldn’t want to see classical stuff mixed in there, I’d prefer just to keep it completely separate.

I think having it together only works if your primary direction for browsing is Genre which I rarely if ever use.

A potential fly in the ointment and your findings may of course differ (but perhaps worth quickly trying out before you commitment to one solution or another): I preferred the sound of Asset to Minim and found that they each sounded marginally better without the other simultaneously running on the NAS.

For my normal listening I browse by Album Artist, and I just wouldn’t want to see classical stuff mixed in there

Actually Asset, but not Minim AFAIK, allows you to do this. The Browse Tree allows you to exclude genres rather than select them, so you could simply exclude classical.

Personally I would find it hard to say what is and isn’t “classical”. Vaughan Williams’ settings of folk songs, Percy Grainger, Film Music for example. But it can be excluded if that is what is wanted.