Sad Day for many and StarTrek fans

From the BBC news website.
Despite her success, however, Ms Nicholls had initially considered leaving the show. But she was convinced otherwise by Dr. Martin Luther King Jr., who described her as the “first non-stereotypical role portrayed by a black woman in television history”.

Yet another part of my childhood leaves the stage…

So very sad. Would never have imagined she was 89. 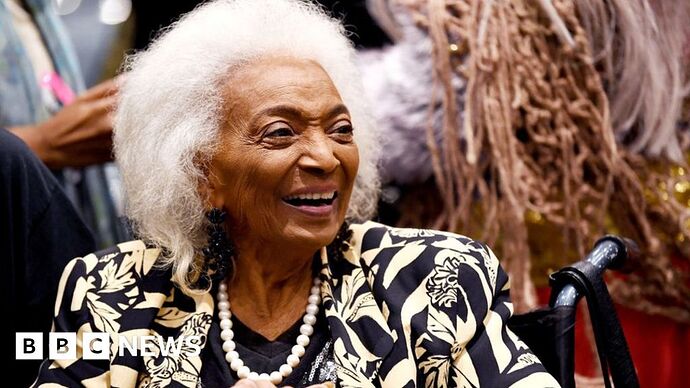 She became one of the first black American actresses to play a figure in authority on US television.

An actress of great poise and presence and beauty.

Cool, smart and glamorous when I was too young to know what those words meant.

Quotation from Whoopi Goldberg in Nichols’ obit in today’s Times:

“When I was nine years old Star Trek came on. I looked at it and I went screaming through the house: ‘Come here… everybody, come quick, there’s a black lady on television and she ain’t no maid’.”

It’s sad that such trailblazing was needed, of course, but she clearly did a great job.