I’ve a nice pair of black ash SBL’s with recent new drivers which I’m using in a second cd only system. My other half has decided the SBL’s are ok but she’d much prefer a natural wood veneer to the black ash.
So my question is are the drivers removable complete with the wiring then it would just be a case of swapping them without needing someone to re- solder the connections if I bought another pair ?
I’d rather not have to look and see and disturb any isoblue.

When people wanted to upgrade their Mk1s to Mk2s the whole box had to be sent back to Naim so it might be harder than you think. A competent dealer might be able to do it, but it’s not something I would take on personally. YMMV of course.

Completely agree with @stuart.ashen - it is almost certain that doing what you describe would require soldering. And - personally - I do not understand why you want to do this…? (potentially risking damage to TWO pairs of SBLs)

Just my views - you are free to disagree…

Better to change your OH…

Hope this helps you. Depends on your DYI level imo 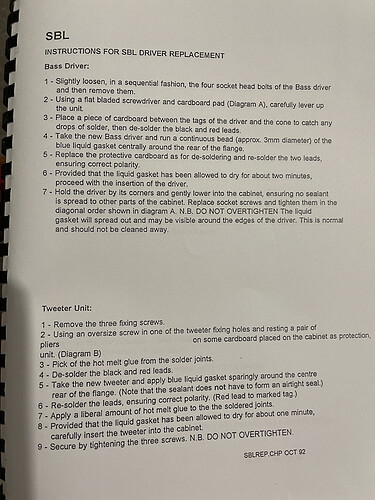 That’s from a dealers handbook from Naim. So that’s what they are instructed to do

The word ‘solder’ appears 4 times in the doc above. There is also the issue of re-sealing of the drivers, to deal with. Pass me the Blue Hylomar…

Because the Naim driver used a new, larger and stiffer cast alloy basket instead of the old pressed steel one, often the hole on the older cabinets had to be opened up a little bit to allow the new Naim driver to fit properly. This was of course something many dealers preferred to entrust to Naim to do properly rather than risk messing things up.

Yes, I remember that a bit of woodwork was involved too Richard. I doubt it’s a difficult job overall but I know my own limitations on the DIY front!

Thanks for the replies and the info. I have recent ( mk2 ) drivers in the Sbls so if I got some older replacements in wood finish I could still benefit from the newish drivers if they were swapped.
What I was wondering was if I could undo the speaker cable sockets at the back of the cabinets and thus remove the whole assembly as one. ie drivers, wiring and speaker cable sockets.

No, I don’t think so. You’ll need to desolder the leads (as per the instructions above) as I think the sockets are removed in the opposite direction.

Thanks Richard, seemed a good idea but I’d have been surprised if it had been that easy !

Why don’t you buy a new pair, install new drivers in them if required, and sell the black ones?

That gives a lot less chance of damage to both pairs of SBLs, is less work, and might even work out cheaper.

That is essentially what I did. My old Mk1s are still here as backup just in case though.

Yes it looks like a new pair is on the cards. From memory I think I spent around £700 on the 4 new drivers inc. shipping to and from Sheffield so I’m not keen to do that again. I’ll have to find a pair with recent new drivers or try and get the soldering done at home on some older ones if it comes to that.