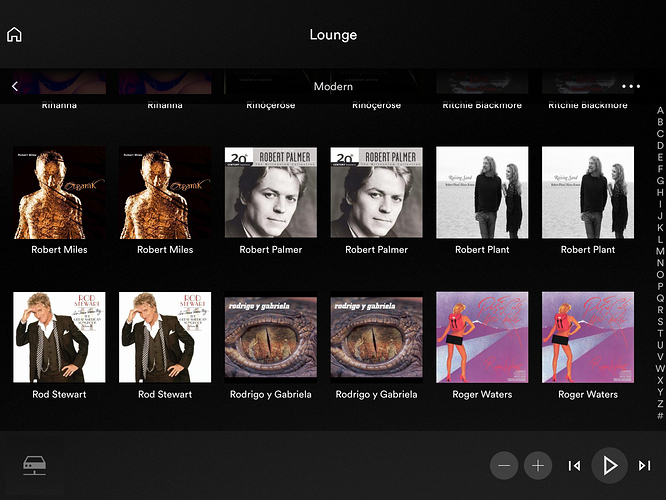 I have two NAS setups, the main one is being copied to the 2nd setup, each has Asset running. Could this be the cause of this intermittent issue?

The streamer/app can only browse one server at a time, but if Asset has been pointed at more than one version of your library (perhaps your main music store and its backup) that would explain the duplucates.
Then again, I’m not sure if running two versions of Asset simultaneously would confuse the Naim app. Maybe try turning on just one at a time, and then clear the UPnP cache on the app.

Both servers show up next to each other on the iPad/ iPhone - usually my finger does not slip.
I’ll disable the spare (if I can).

If one NAS is copying (I assume you mean backing up), you don’t need Asset running on that one.

Indeed … I have tried several times over the years to copy one set of files from one NAS to another.
I have tried just copying, using backup software (but this compresses the data?), and now I am trying to use Qnap’s backup-sync.

The reason I have two copies of Asset running is historical; when working from home my main NAS (4 bay Raid) was often busy, so for my music I went to the other NAS (2 bay mirror). Ideally I would have a dedicated NAS for my music - I’m getting there and plan to have another NAS purely as a backup.

Ideally I would have a dedicated NAS for my music - I’m getting there and plan to have another NAS purely as a backup.

OK to have a dedicated NAS for music if the other does affect access.
As for another NAS just for backup, nothing wrong with that, but if thats just to back up the music NAS, why not think about a WD “My Passport” USB, I use one just for music NAS back up. No permanent wiring, USB connection is the power, its a lot smaller than a NAS (pocket sized). I just plug it in once or twice a month, depending on how many new downloads & store it in the fire safe. .

I have problems with them in the past, not with music, as a backup of work when travelling. I’m sure they should do the trick now at home.
I was only going to have a third NAS because I upgraded my disks in No. 1 NAS earlier this year so have a couple of spare, hardly used, 2TB disks. I’ve looked at other ways to mount them but have not found anything suitable.