Hi all, as a new Asset user, wondered if anyone can help or advise. I have a QNAP 212 where I rip to via dB Poweramp On a Windows 10 PC. I have many CD rips, hi res downloads and CD singles all held in Multimedia share under Music. This is fine but very congested. I wondered if there was a way to separate the music into separate headings of albums and singles ?. I initially thought I could create new folders under Music but these are sub folders which Asset doesn’t read. Is this possible ? or on any other software ? I recently got rid of Twonky. I am very much a non computer person so I am asking is there any straightforward way of doing this ?.
Many thanks
John

The standard way to organise the files on your nas is to have the overall music folder, with a folder for each artist beneath that, and the various albums and singles by that artist in folders beneath.

That’s just how you store them. How they appear on the Naim app is entirely determined by the metadata.

Here are some of my EGTG albums and singles. They are all together but it’s clear what is an album and what is a single. Splitting them via metadata would simply mean I had to look in two places, making life harder rather than easier. 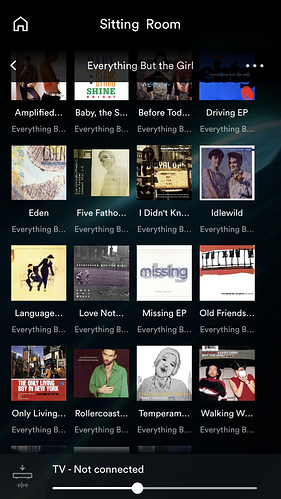 I have minimserver rater than asset but I think it is possible with asset as well using metadata.
I suggest you look at the Adding Custom ID Tags to Asset in the illustrate Asset upnp forum.

You will need to use a programme like Mp3tag or dbpoweramp to add the metadata.
You could use a tag such as comment and add metadata for single, album or download to each file.
Then you should be able to search by comment to get one of the three categories and then carry on by artist or album or whatever.
I have not done this in asset but it works in minimserver.
Ian

Thanks very much both, i will try that.
cheer
John

As Ian suggests, create a custom tag for each item and make the value ‘Album’, ‘Single’ or ‘Download’. You’ll then need to add a new entry into your Asset browse tree which uses this tag as the first level of the branch (plus then artist, album or album artist under that).
The issue is that you’ll have to use tagging software to set the value for all your files.