I’m generally happier with the Arcs on classical or vocal music as well.

Moved things around a bit. Sad to say not much improvement but will keep trying. Thanks for the suggestions, and keep 'em coming.

You may have tried already/ it may not be domestically acceptable, but I’d be tempted to pull the Arcs forward 2 feet or so, get them out of the bay window, keep them the same width apart, but flanking the love seat. No improvement? 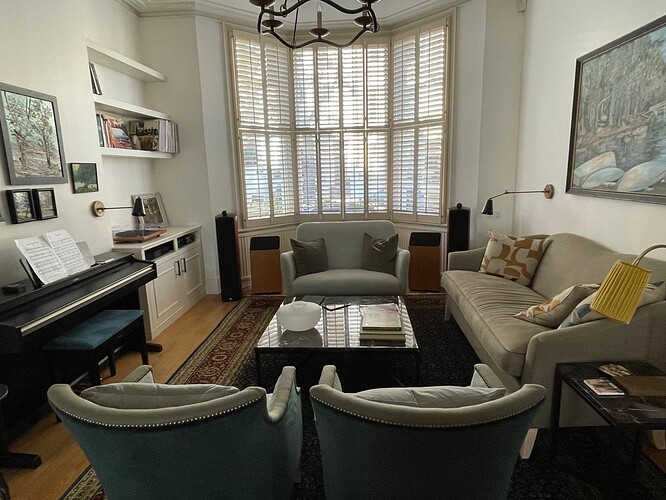 Moved things around a bit.

But have you got the B&Ws out of the room? Even disconnected they could suck out the bass and mids.

I did try moving them out yesterday. Didn’t help on its own but I got more bass when I was able to push the Arcs outward a bit, toward the edge of the bay, following the angle of the bay (severely toed-in). Seems in my setup and/or room the passive radiators need to bounce off a rear wall. Believe both of the above will send most audiophiles running for the hills!

The passive radiator at the back definitely benefits from a set distance from a hard flat perpendicular wall, ideally between 18 - 24 inches. I find toeing them in more than a very small amount confuses the stereo placement though… but then I sit between them.

Shame your hardware appears to be at the far left corner otherwise there might be a chance to try them either side of the sofa, although you’d have to lose the coffee table. I’m almost certain they’d sound better there than firing down the length of the room.

Yeah, I won’t be able to move the hardware or rewire the room any time soon (we had it done as a compromise). I guess the front-firing B&W bass drivers just deliver a lot more than the passive rear-firing radiator of the Shahinian and without the proper orientation they fall a little flat. If not for trying to fit a smaller speaker, I’d have already made up my mind… but I have a week or so more in me. Perhaps will get an opportunity to hook up some more power in case that has an impact.

Maybe the piano before the windows and the speakers in front of the sofa?

Stupid question and asked without presumption, but have you checked the Arcs are connected in phase?

The bass radiators terminate a transmission line design in the Shahinians and so shouldn’t be that dependent on a wall… They haven’t really been in mine, though moving any speaker closer to a wall reinforces the bass

There are no stupid questions! Well, perhaps that’s not completely true….

Anyway. What’s the best way to check the phase? Everything looks ok but there are two wall plates involved with a run of cable between each.

In which case, perhaps the simplest thing to do is to reverse the connections on the back of one speaker only, and decide whether the sound is better or worse.

Turn the amp off first. Do not turn it back on until the connections have been remade as above.

Well, folks, I really can’t believe it but I have, in fact, wired them out of phase! I don’t recall ever having done this even 30 years ago but alas. I had made up some new cables and wired one of them incorrectly underneath the right side Arc.

While it’s too late in the night to crank them up, at low volume I can already hear an improvement in the sound. They still don’t come close to the 804s, but the Arcs are now sounding appropriate for their much smaller size, with proper balance between high/mid/low.

Oh, to turn back time…

Thank you all so much for your additional ideas, which will be helpful to fine-tune even further.

Cheap upgrade!
Reminds me many years ago I had Dalhlquist DQ 10 loudspeakers. 1982.
Had these classic American speakers. I believe 4 way speakers. Had them for over a year and subsequently discovered the super tweeter was not connected on both speakers. Maybe prior owner disconnected these drivers.
Simple reconnection and suddenly had more high frequencies!
Probably not as dramatic a discovery as yours, tho.
David

It’s easily done with those connectors under the base…

Yes and I had used some relatively cheap cables (awaiting something else) where it is almost impossible to tell the conductors apart… and I had connected them without termination on the speaker side, which is where the reversal happened. Putting it all in writing is slightly embarrassing. Thank you so much for making the suggestion.

On a room like yours, the Shahinian will give more of a focused ‘thump’ in the bass if they were placed either side of your piano, whilst you listened sat on the sofa. Lengthways like you have it now, will give a more open, spacious sound, with slightly less focus on the bass. I prefer it the way you have it. The other speakers in the room definitely need to be removed. I would spread the Shahinians apart a little and bring them further into the room away from the window by about another 6-8". They really need space around them.

Yeah I’m going to miss the little bit of bloom that I got from the 804s… realising that purists probably wouldn’t have wanted it in the first place.

Re: placement I bought into the marketing of the Arcs being unfussy with placement but from my few experiments (with speakers in phase now) they are rather sensitive to it.

They do have a lot of airy clarity (suspect the super tweeter effect here) but I’ve not achieved much stereo imaging with them yet. That’s not a top priority though. Still working on the mid/low fullness.

Well now I’ve had a chance to swap in a 250.2 and yeah there’s plenty of bass to go around.