Shaun Keaveny, on his way

Shaun Keaveny reaches the end of his broadcast time with BBC 6 Music tomorrow Friday the 10th, and what a loss it’ll be. Late to the party as usual I only came across him 3 years ago when a job change and a car with DAB meant that the morning commute was fun again for the first time since Wogan left us. Shaun on 6M was head & shoulders better than the ginger oik, Today or any of the commercial offerings. His move from breakfast to afternoons almost meant the end of my time hearing him but luckily we had a pandemic and WFH became the norm. Phew.

Fwiw I reckon he’s one of the best broadcasters of his generation, and the afternoons are going to feel a bit empty without his show. I’ll get over it, I’m almost over Alan Freeman packing in his Saturday Afternoon Rock Show on Radio 1.

I echo your sentiments. Working from home meant I could continue to listen to him when he moved to afternoons. I have enjoyed his depreciating manner and the way his audience poke fun at him when he takes a holiday (“off sick again?”). I was rather hoping Chris Hawkins would get the afternoon slot but I will give Craig Charles a chance. I still miss Radcliffe and Maconie in that slot and now hear they are being reduced from 3 to 2 hour shows.

Good show, very good even if the final 9 minutes of thanks & goodbyes was a bit over the top.

One thing that leapt out was that he confirmed that he was booted out - the initial announcement a couple of months ago gave all the impression he’d decided to go off to pastures new, but his last link referenced him being told he he wouldn’t be doing the show any more. That’s a shame - the show has continually and consistently been one of the easiest things to enjoy on the radio. Podcasts it is then.

Good luck to him.

I agree. I think he’s a very entertaining presenter and seems to be a thoroughly nice chap as well.

I was also surprised to hear that he was pushed. I hope we get to hear him again soon.

Agreed, a really sad loss, was also intrigued to discover he’d been given the boot. Why?

Unfortunately, Craig “did I get away with it” Charles just hasn’t got it. I’ll not be listening.

Big big loss I fear for six music losing a guy of his Caliber- anyone know why and what he is doing next?

He was pushed; rumours are because of his anti-govt tweeting, or 6M having a change of direction. It’s all rumours though, nothing solid.

He’s already moved on with a new podcast, he’s due on Sky Arts this weekend presenting some of their Isle Of Wight festival coverage, and is due back on the beeb in a couple of weeks standing in for Lisa Tarbuck on Saturday evening.

This might be against forum rules but hey, shoot me; a fan did a superb artwork of the last show and its playlist, and is flogging it on Etsy. Any excuse to help a struggling artist… 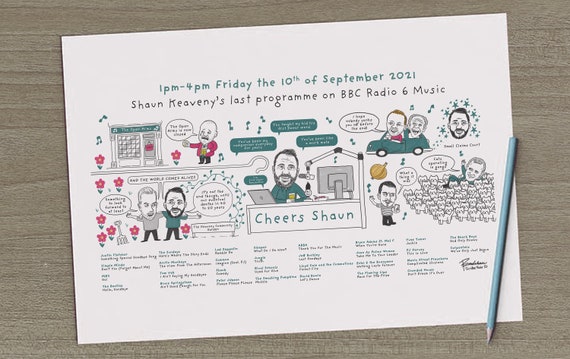 Thanks for your reply, understood!

Craig Charles is ok, but he seems to be trying too hard. I miss the afternoon being divided into sixths.