Show us your flowers 💐 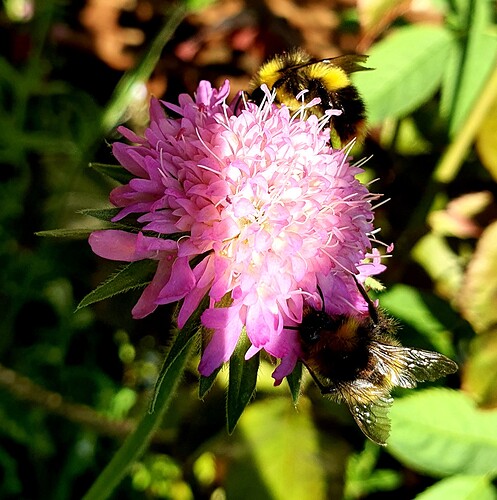 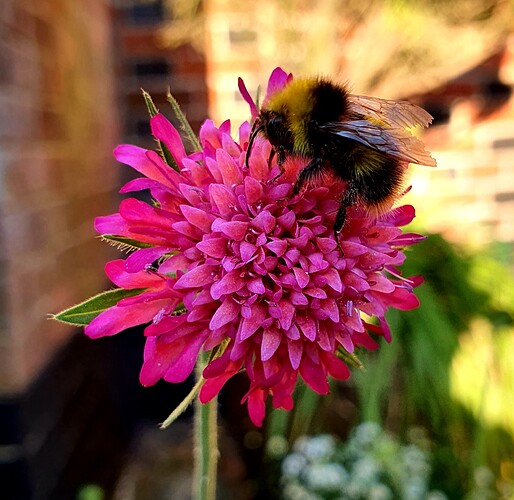 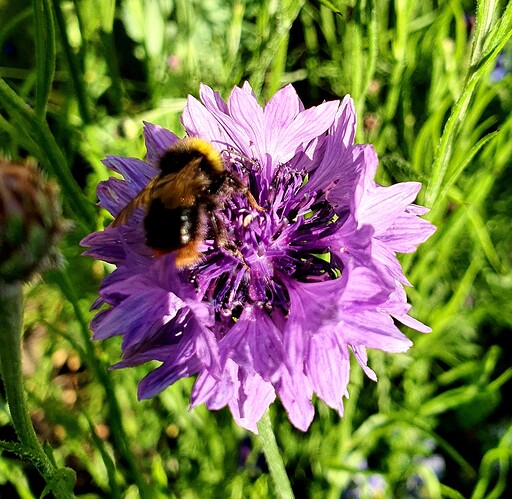 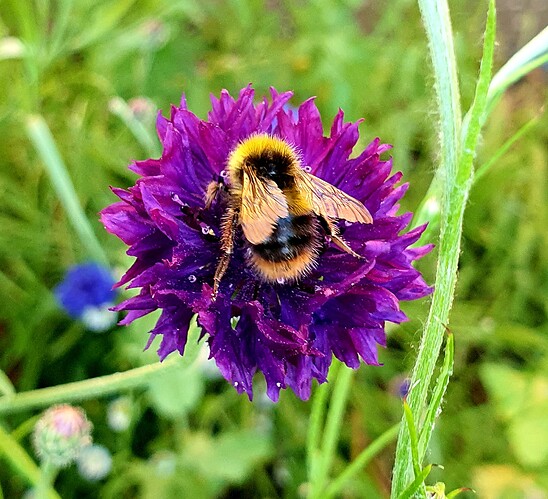 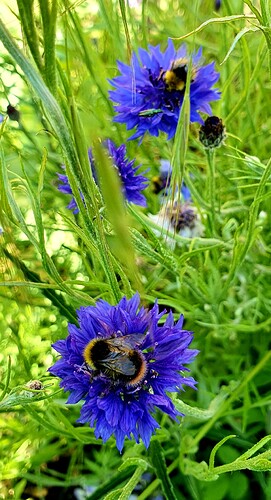 Thanks to everybody who replied.

My wife said it’s an allium, as far as she knows, but looking at photos on the internet, it does look like an agapanthus.

She pointed out a couple of allium plants that had already flowered and lost their petals, but the shape is very obviously like a ball. The plant that I took the photo of doesn’t have any flowers yet, in fact the long stem hasn’t grown yet.

Another photo that didn’t take as much effort to capture. 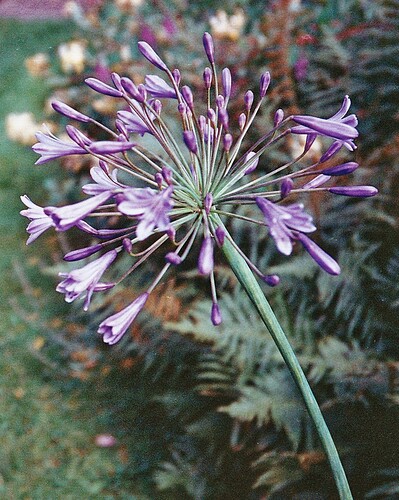 Its an Agapanthus….sorry for the wrong steer….
Ours are yet to flower and some have large flower heads or rather delicate as you have posted.

Please take a close look at the photos of two allium below. You should be able to notice that the center of the flower has a green bulge (I’m not sure of the botanical term as I’m not a botanist). You may also notice that the tips of the petals are also more pointed and slender.

I used the PictureThis app on the photo you provided and it identifies it as an agapanthus (please note it is not always correct). In the proceeding photo you should be able to make out that the tips of the flowers are more rounded and there is no green bulge in the centre. In addition the stamen protrude more centrally. 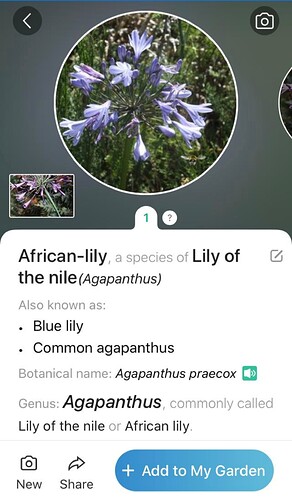 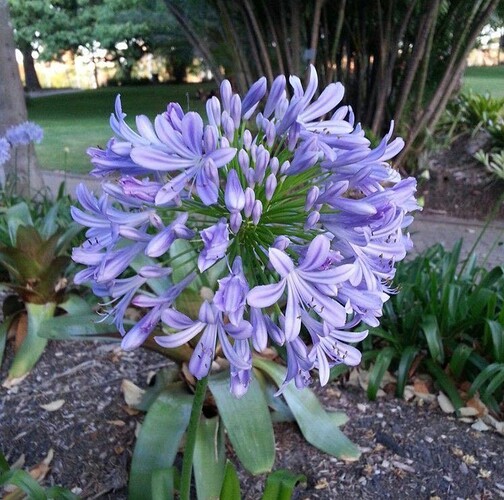 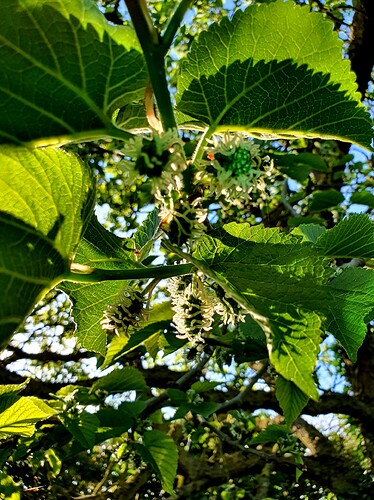 I like Hostas, there’s a few different types here. 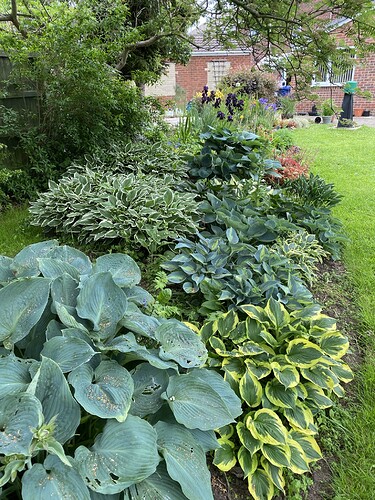 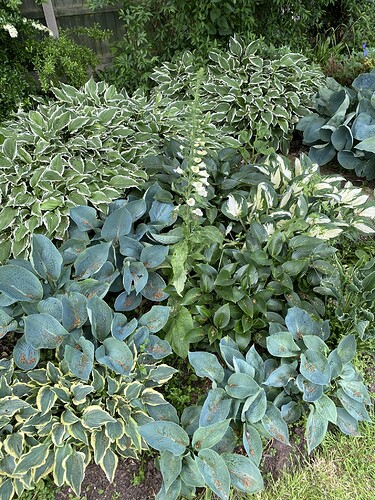 Satori, I’ve removed an image. Please do not post pictures here that are clearly copyrighted without the owners express permission. If in doubt please ensure all pictures are your own or clearly in the public domain. Thanks.

Richard, you have my apologies and I’ll proceed with more caution in future. Warm wishes to you.

I really like large leafed ones, such as Blue Angel and Mammoth but these two are similar in colour with slightly different leaf shape.

You may have noticed that I am particularly fond of bumblebees.

Yesterday I was busy clearing away the vegetation occupying the space for my new garden room behind the vegetable patch and I noticed that there were several bumblebees buzzing around me. They became quite aggressive and one landed on me. I found this to be rather strange because they are normally busy going about their day to day activities without making human contact. The persistent harassment concerned me so I decided to call it a day and resume the next day.

This afternoon my wife came out to assist me but after a few minutes she was stung on the forearm by a bumblebee. We both found it to be rather peculiar that there were so many of them buzzing around. After applying a herbal balm on the bite and giving her a cuddle

, we noticed that there were many of them walking around on the soil. This lead us to conclusion that there was perhaps a nest in the soil and they were becoming aggressive because we were disturbing their home.

We had a few options to consider (1) delay building the garden room until after the end of August (when they die) or (2) relocate them to a new home. We decided upon the latter but it turned out to be an absolute nightmare!

I didn’t have a beekeeper’s protective outfit so I improvised by wearing a pair of chainsaw chaps, helmet with visor and leather gloves. I also burned some wood to produce smoke in order to try and pacify the bumblebees. As soon as I began digging looking for their nest, the bumblebees started buzzing around chaotically. An hour elapsed and I had unearthed about two square metres of soil but I still could not find their eggs. I was at a loss whether to continue because the situation had become quite precarious with a large swarm of bumblebees buzzing around.

Try to imagine my situation, I’m dressed up in heavyweight chainsaw attire sweating buckets whilst being baked half to death by the intense heat of the sun. I have a spade in my hand desperately searching for the nest (that I thought would be relatively straight forward to unearth) and all around me are an angry mob of bumblebees. I felt so defeated and decided to recuperate in the shade. All of a sudden there was an intense burning sensation on my ankle: a bee had worked its way underneath my chaps and left a nasty sting. It was my turn to be cuddled and a herbal balm was duly applied

I peered upon the devastation that I had created. There was a huge mound of soil and the queen bee was frantically surveying the area. Her poor progeny no longer had a home. Had I destroyed the entrance? Had I buried some of them alive? My heart sank and I was in a state of despair. My disposition was close to tears. Had I inadvertantly committed bumblebee genocide?

A voice inside me told me to persevere. I summoned what little left that was inside me and grabbed the spade. I enlarged the search radius and low and behold I found the eggs. I relocated them but the bumblebees did not follow: they were so confused and continued to circle the area they called home. My heart sank to a lower level. Had I caused them too much stress? Did they not like their new home? Where was the queen bumblebee? I needed to catch her.

Armed with a colander and plastic chopping board, I tried in earnest to catch the queen bumblebee. She was considerably larger and flew much faster but she repeatedly encircled the area. I bided my time and waited patiently. She was now at my disposal. I let her cool off for an hour on top of her newly relocated eggs before removing the colander and placing a large terracotta pot over her new home.

I was now faced with a new problem: the bumblebees were still buzzing around the vicinity of area they knew as home. My wife and I decided to catch them one by one and introduce them to their new home. It was a laborious process but we managed to rehouse about fifty bees. As dusk approached there were still some bumblebees looking for their old home and we tried in earnest to catch as many as we could before the light faded. Here are some photos taken through the hole of the terracotta pot. The queen bumblebee can be seen to the right of the cluster: 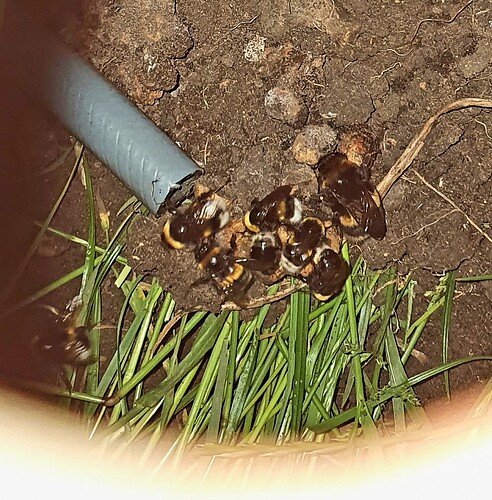 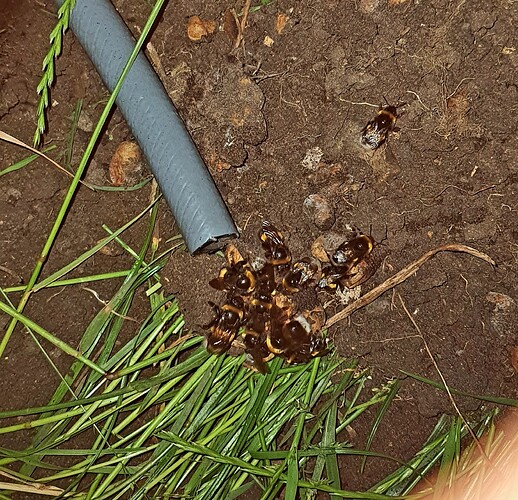 They seem to be happy tending to their eggs. 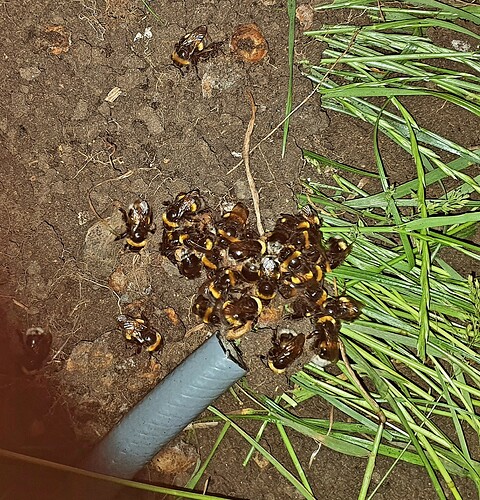 I shall keep you informed of their progress. I sincerely hope that they take to their new home! 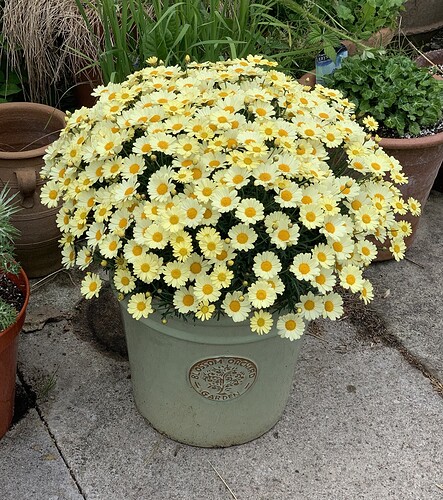 Argyranthemum Frutescens keeps churning out the flowers. I like this subtle lemon colour. I’ve had a go at overwintering these before in a greenhouse, but always failed. Perhaps I should try cuttings.

This is a David Austin standard rose called Lady of Shallot and my roses this year are two to three weeks behind. 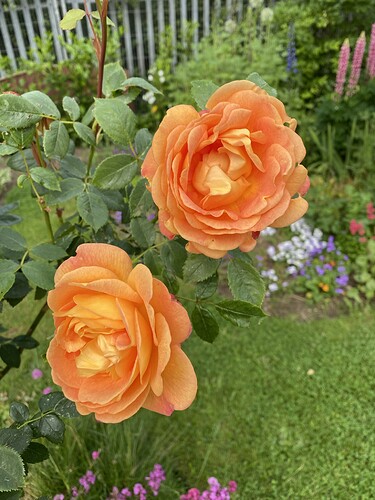 Funny enough, I’m having the same problem at the moment. Tree bumblebees have built a nest in the top of the rabbit hutch. We tend to get bumblebee nests every year somewhere in the garden and have never been a problem. However, this past week they’re getting out of hand and chase us away when we approach the hutch. I’m determined to leave the nest where it is. My only answer atm is to spray the area gently with a hose and they think it’s raining. They go away for 1 minute, I clean the hutch, then run. It’s no fun though.

Here’s a snap. There’s actually 15-20 there, but the phone is no capturing all of them at speed. 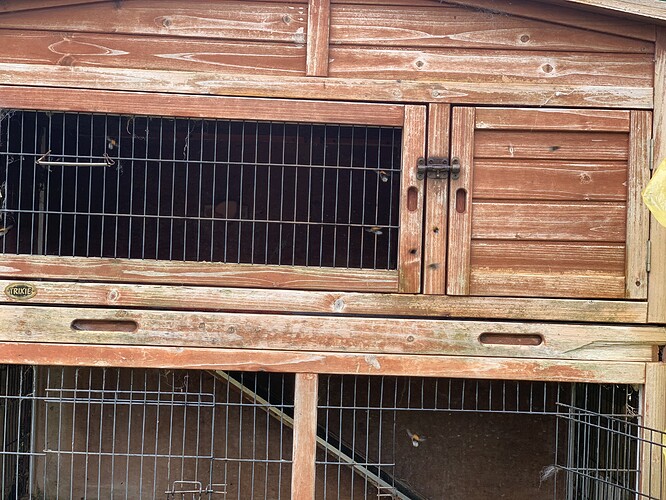 I checked on the bumblebees this morning and they were less in number than last night so I assumed some of them had departed for the day. You may notice that the queen appears to be on the far right side of the cluster: 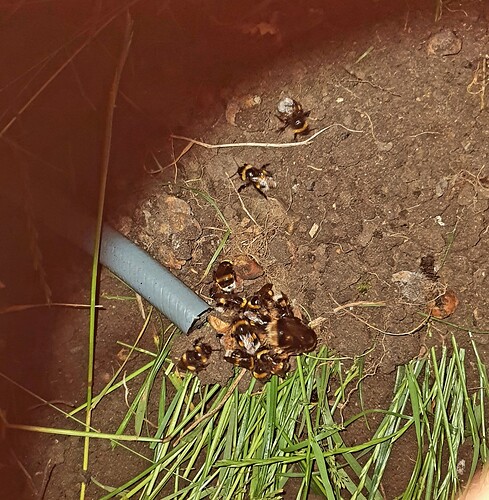 I checked again this evening and you should be able to notice there are many more than in the morning. What I find particularly interesting is that they have collected fallen pink horse chestnut flowers to use as bedding material: 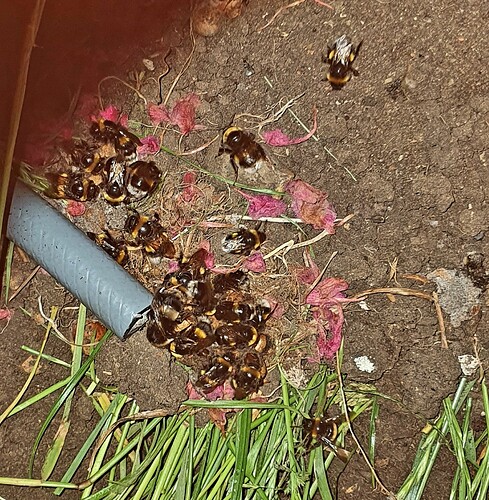 I’d be interested to learn how you tend to your roses. Do you use pesticides like Rose Clear or have you managed to care for them without the need for pesticides etc? You have my warmest wishes.

Cow Parsley even manages to look spectacular in winter, frosty/snow - before a thaw. I took this photo in Dec 2020, on a minor road close to home. 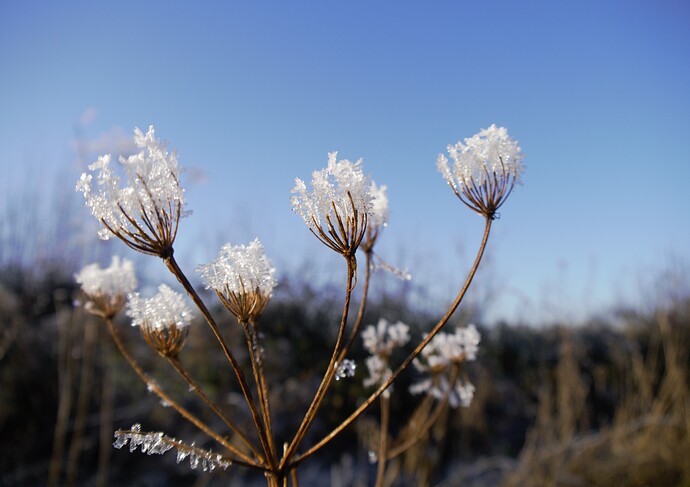 You’ve captured a depiction of how nature still manages to manifest beauty against all odds even during the harshest conditions. Thank you for sharing. You have my warmest wishes.