With the introduction of the Favourites feature, it’d be nice if this topic could be revisited:

I’m not much into curating playlists, but I do favourite individual tracks, which in itself is one MEGA playlist of top quality tunes.

I wish the Naim app would let me queue up all these tracks in one hit, and then let me play them on shuffle.

It’s been requested before without much traction:

Naim App - Tidal - How to play or shuffle my favorite tracks? Streaming Audio

In Tidal you can keep favorite Artists, Albums and Tracks. In the Tidal App, on My Collection, you can play or shffle your favorite tracks. It seems that in the Naim App, you can not. Only one track at a time. What the use of a long favorite tracks if you can’t play them as a playlist? 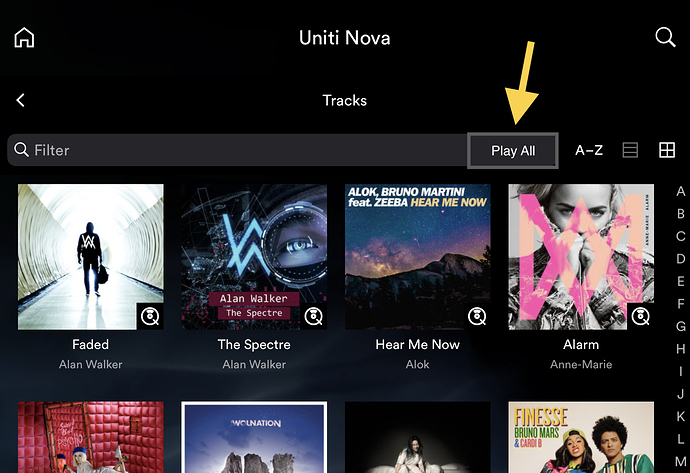 Staggered at the lack of support for this, given every music app I’ve used in recent memory allows this kind of usage. Oh well

I think it would be a nice feature although, I don’t think it’s one I would ever use personally.
Same as I never create a “playlist”.
I’ve also never really understood why anyone would want to create playlists.
I just play an album and maybe queue another one or two to follow on.

I’d like to see a more robust playlist/play all feature too. The play all for favorites would be a nice feature to have.

Ditto - and playing tracks in random order is complete anathema to me. But it seems some people like to do that, and its been requested before so I’m surprised they haven’t yet enabled an option, assuming the desire has been communicated to them (I doubt they are able to read all threads on the forum to be sure of picking up things like this).

For the OP, Roon, which some people love (others not) has a facility called “Roon radio” that does plays music randomly, apparently can mix up both online streaming and streaming from your own store. However it is a rather expensive solution.

Ditto - and playing tracks in random order is complete anathema to me.

I actually do this with one or two “albums” but primarily for my 12" Single rips, which I didn’t wish to number as seperate tracks.
If I don’t choose “random” to play them, they play alphabetically every time, which when only having say, 30 minutes listening time, would otherwise mean I always hear the same 5 tracks every time…

On occasions when I do just play individual tracks, I simply pick and queue what I fancy (often what I fancy next may suggest itself while something is playing). But of course everyone’s approach to pkaying music is their own, none wrong or right, so if Naim is aware of various desires one might expect them to facilitate all if reasonably practicable and not negative to others to do so.

I have some demo files from 2014 to 2019 that consist of various artists from each year. They are all audiophile quality, or excellent recordings that a certain dealer uses to demo gear.
I use a playlist to group all six years together, which adds up to 96 songs in all. I quite often just listen to this particular playlist on repeat…lots of variety, and all top notch recordings that lasts 4 to 5 hours.
The shuffle feature would not matter to me in this case, since every song is from a different artist anyway.

Generally speaking I’m an album listener, and I’d never listen to an album on shuffle. Nor would I listen to my whole library on shuffle. But for me, favourite tracks are a bit special, because regardless of genre, I love them and I enjoy a good mashup.

On a tangent, I’m currently on my second Roon trial. I balk at the cost, but I’m very nearly a convert because every time I use, it it takes me on a voyage of discovery with its excellent recommendations and the Roon Radio feature.

It’s like shuffle on steroids. Decades ago iTunes Genius was half decent at making interesting playlists, but Roon is next level.

Just need to mute my inner penny pincher and get the wallet out (again!)

On a similar note I accidentally deleted a UPnP playlist I created in the Naim app. Is there a way to recover it or gone forever? It wasn’t too big so not a huge deal. More curious than anything.

Do you have a backup of your phone? On the old iTunes backup of an iPhone you could see the Naim app and its playlists, and it should have been possible to restore the app from there.
If you delete the app now, it may be possible to restore it from an iCloud backup, although I’ve never tried it. Obviously you would have to do this before any automatic backup process deleted your playlist from the backup, so it may already be too late.

Thanks, I don’t see how I can restore just the app and not the entire phone from the icloud. I don’t think I’ve ever backed up my phone to my MBP b/c I never connect my phone to the computer. It’s not a biggie, it’s easy enough to recreate.

To be honest I’m not sure if it’s possible with an iCloud backup. I prefer to keep my playlists on the server rather than the app, partly because backup is simple and effective.

Yeah, my preference is to us a M3U file on my QNAP but I haven’t figured out how to make one easily so the one I have is not very large. I wish there was a way to spit out all the file paths of the tracks on my server to add to this file.

The Unitiserve (and I guess the Core) make this very easy as you can just flip over to the N-Serve app to add tracks to a playlist then back to the Naim app, where it immediately becomes visible. Not sure if any other servers can do it that easily.

Interesting, I wouldn’t know anything about that not owning a Unitiserve or Core.

I initially thought if there was a way to export the file paths of all the tracks in the music folders of my QNAP I could assemble one easy enough but haven’t figure out how to do that. Doing this manually is very slowww.

What UPnP server do you run on your QNAP? I believe some servers can store playlists in such a way that they are visible in the Naim app Server input. What I don’t know is whether any of them other than the Naim servers can easily create and edit playlists in the way that the Unitiserve and Core can, i.e. without having to muck around figuring out what an .m3u file is, how to create one, and what to do with it to make it useful. That all sounds a bit too much like firing up a PC running Windows 98 for my liking.

I’m using Asset for locally stored music, Minimserver for streaming FLAC radio stations (m3u file), and Bubbleserver for Tidal streaming, I think. I already have a playlist (m3u file) that functions with Asset and I can see and use in the Naim app. It’s just labor intensive to build it so I don’t have many tracks in it and don’t use it.
All it is is a text file with the paths of the tracks in my playlist:
I just need a way to spit out the track file paths so I can copy them into the text file and I’d be good to go:

Playlist Creator software will allow you to create the playlists by browsing your music and picking tracks and/or albums. For QNAP you’ll then have to do a fairly simple find and replace to get the paths it has created into the right format for the QNAP (Linux-based?). I can post an example if necessary.
Playlist creator might be Windows only - I don’t remember.