Sibilance - can someone test a track for me please

For some reason I’m noticing bad sibilance lately on my gear.

I’m streaming “Massive Attack - Safe From Harm” via ROON / Qobuz, it’s really noticeable in the first 90-secs of the track and almost un-listenable. Even the other half came in and said “…this sounds terrible”.

Have tried with my NEAT Iota Alphas and my B&W CM6 S2 speakers and there’s no difference.

Setup is as per my profile and I’ve removed the following for test purposes, yet get the same issue:
SN3 Power Supply (non-Naim)
Chord Qutest DAC

Could someone possibly stream as a test to see if it’s my ears or the recording.

Which version of it?

I know this isn’t what you asked for but the version on the Blue Lines CD sounds fine.

Hoping you can sort it out.

Thanks for the response.

It’s the Collected version I am listening to, let me test on Blue Lines.

I’ve just had a listen to the Qobuz 24 bit version and I admit it doesn’t sound that great, especially when the male vocals kick in at around the 1 minute mark.
Perhaps there’s something in your system or room acoustics that exacerbates this, but to be honest I’ve never found Massive Attack recordings to be very good. Having heard them live a few times back in the day, I really wanted to like them but always found the albums a pale imitation, initially on vinyl and later the digital versions.

That’s the exact point in the track I’m referring too.

Thanks for the testing guys, now I don’t have to pull everything apart to diagnose the issue

edit - just checked the BlueLines version and it’s not as harsh.

I found blue lines to be terrifically sibilant, but I feel they did a reissue which dealt with it a bit?

I’m confused about the versions you are all talking about, in Qobuz there are only two, both are 96/24 of the 2012 remaster and one is the “explicit” version and the other is not. Listening through Roon to the explicit one and don’t find the sibilance bad at all, but maybe it’s because I’m hearing this as the dancefloor track that it always was, and not an audiophile indulgence, so maybe my expectation is not the same. I haven’t compared it to my original pressing vinyl right now, but the way I remember it this remaster seems to be quite much nicer

No sibilance on my system with this recording. Although my speakers use a first order crossover and I have read that this is one of the benefits. Although, I will say that the recording does seem to be quite accentuated in the highs.

Although my speakers use a first order crossover

Same here incidentally if I am no mistaken

This is a fine example of how bad mastering can make a nice track sound bad, I have never been a fan of Massive Attack, although they have some “classics” and their loyal fanbase. As I am very sensitive to harsh highs, I wanted to see what OP experienced and how it sounded on my system. I have heard this track before, but have never focused on its mastering, now I have listened to both remaster versions, the first one being from 2006 and the other from 2012. The latter has been awfully remastered, I haven’t listened to the original, but since there 2 remaster versions I guess there is something wrong with the original as well, although not necessarily the case every time.

The 2006 version has been nicely crafted and especially the high frequencies, there is no focus on the hi hats, they are audible, but are very coherent with the rest of the instruments. It has always been a mystery to me why engineers very often put accent on this area, when there is absolutely no important musical information there, I guess it is an attempt to help with the dynamics in a certain song, or maybe it sounds “cleaner” this way, but if the smallest liberty is taken, this automatically makes the track absolutely unlistenable, even when the rest of the components and vocals are fine. No sibilance on my system on this version even at 1 min mark with the male vocal.

I have listened to 2012 remaster on high definition Tidal “E” and it is not a great recording. The male vocals are sibilant and the overall recording is somewhat compressed. This is on a Core/272/555DR/250DR/ Ovator400 system. So I agree with you.

Yes I think I have my versions mixed, I remember one being unlistenable. It always seems to me remasters are done by older men, who are loosing their hearing so accentuate the highs, some of the recent Pink Floyd stuff is terrible.

I never found blue lines to be all highs, t was just the recording of the voice that I was sensitive too. Its not a great time on NBLs lol.

It always seems to me remasters are done by older men, who are loosing their hearing

… but that is the same demographic that buys them…

Just listened to both versions on blue lines and collected via qobuz and both have a bit of sibalance, not terrible on my system but the version on collected does seem to have a touch more. The cd version both played and streamed seems to have a lot less.

Please have a listen to “Mezzanine” very, very good if you ask me …

In general I find their recordings fine, for me it really was just the voice on blue lines. ‘Prey For Rain’ is a particularly good recording and nice tune.

Groups that have frequently disappointed me for quality would include Chemical Brothers, I like the music but a lot of the recordings is very poor, REM same.

I’m streaming “Massive Attack - Safe From Harm” via ROON / Qobuz, it’s really noticeable in the first 90-secs of the track and almost un-listenable. Even the other half came in and said “…this sounds terrible”.

If you are using Roon, click DSP, and disable “Sample Rate Conversation”
Your DAC can decode DSD, if you are using a USB connection to your Roon PC, then try DSD. I am not sure how you would do on a ROCK based server, I have an Intel NUC running Windows 10, and the Roon ROCK software, my DAC sounds wonderful at DSD256

If your sample rates are set incorrectly then you will have an issue with sibilance, if you cannot manage the DSD via USB, set the DSP conversation to PCM x2.

I would also recommend that you Roon Rock runs on a PC dedicated just for Roon, and run nothing else.

I am playing a ripped CD of the Massive Attack album, It sounds great on my NUC feeding a none Naim DAC at DSD256, listening to the Qobuz version, the 96/24 does not sound wonderful, converting to DSD will sound better IMHO. Just don’t tell Phil at #Cymbiosis who is neither a fan of Roon, nor DSD, at least he wasn’t the last time I spoke to him, perhaps he needs some conversation therapy? 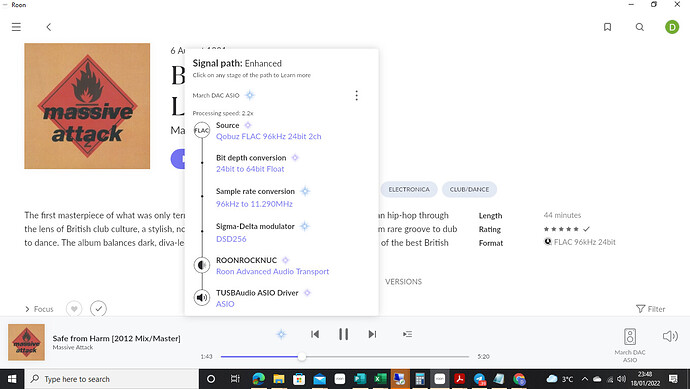