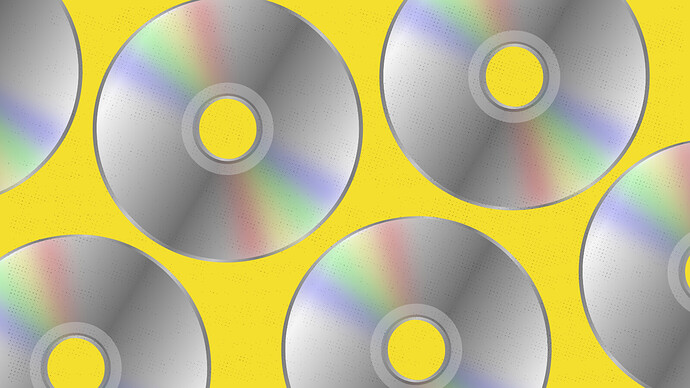 3 Trends That Prove CDs are Making a Comeback

By breaking down Discogs data from the last five years, it's easy to see how artists, fans, and record labels have kept the CD alive.

Here is a Discogs report apparently showing this trend.

Total sales value, all formats was up 24%. The split here is interesting though.
Physical sales value up by 43%
Digital download fell by 12%
Digital streaming up by 24%

The figures I gave are just sales. I think the full report might break that down more.

The question is, what constitutes a sale in a subscription service - total number of subscribers would indicate overall level, but if only new subscribers it is inevitable the number will fall as take-up approaches saturation. I assume the former, but without looking into it (which I’n not sufficiently interested to do) it is uncertain.

CDs of course are bought by home streamers as well as people playing direct from CD. Sales of CD players might be a better indication of popularity of the medium for play.

Very questionable reasoning there in the Discogs article. People on Discogs selling off CDs cheaply somehow indicates a resurgence?
And similar for CDs getting entered into Discogs, I precisely did that after selling my CDP and when ripping the ones I had.

If you go to the riaa website you can search by sales value as well as by units sold. Cds show an increase of units sold 2021 over 2020.
Although it is the USA the data is really interesting and displayed well.

I’d post a link but I think that’s against the forum rules.

The RIAA link was posted in another post in the past. It is not selling anything and hence there is no problem with the rules. IIRC it was a one-time small increase of CD sales during the pandemic. Certainly not comparable to the vinyl numbers, at least not yet.

In any case, there may or may not be a CD sales increase, but as far as I can tell it’s unclear if this is a “comeback”, and I just don’t think the people selling off CDs cheaply on Discog, or entering their old ones into the database, proves that there is a comeback

Absolutely agree. That was why I looked at the RIAA for new sales.
Data is available from 1973 to 2021 year end. Fascinating to look at the trends and last recorded sales of things like cassettes and eight track. 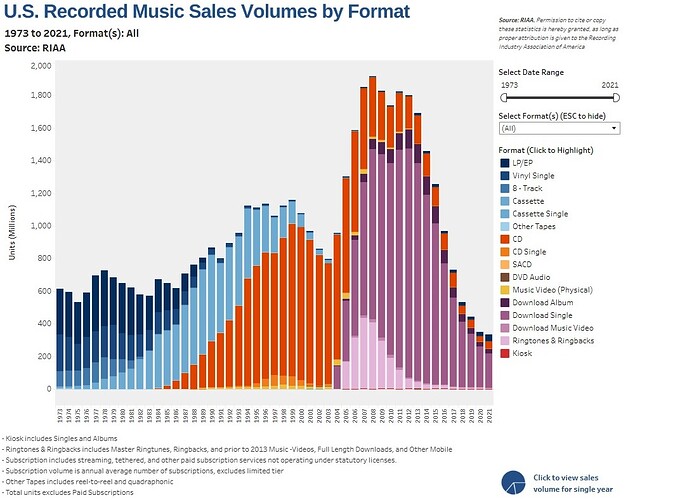 The big driver behind the rise in CD-sales globally was asia. But CD sales increased almost everywhere if you look at local data.

This is interesting, but with the continued improvements in streaming I just cant see how CDs make a real comeback of any significance. A lot of older folks (like my mother and my in-laws) use CDs because they can’t really be bothered to figure out streaming, but the low price, high quality and convenience of streaming make the relegation of CDs to nostalgia pieces, coasters and kitschy sun catchers practically inevitable. Perhaps it is a limited sample, but I don’t know anyone under age 65 buying new CDs in any meaningful way. At least vinyl offers something different from streaming, as it is analog. IMO CDs are just an inferior way to listen to digital music. I have 1500 CDs in albums on shelves, and I can’t bear to part with them, but haven’t touched them in 10 years except to re-rip the odd one in a higher resolution. Red book CDs were awesome as an evolutionary step in digital music, but that’s really all.

I think one of the really marked out things for me is the number of single downloads compared to full albums. It seems the yoof really don’t have an extended attention span.

Will albums even survive?

If you look at the RIAA screenshot, yes, it increased once or twice recently from a low level by a tiny amount. If that’s a trend yet, maybe, but I don’t see it in the data - yet

bruss - what is your source data? Interesting that it indicates ‘sales’ of $16b, but then says that ‘digital streaming’ is up by 24% - I think that’s a volume metric?

Spotify had 2021 revenue of almost $12b (albeit globally), so interesting to see how this is calculated… 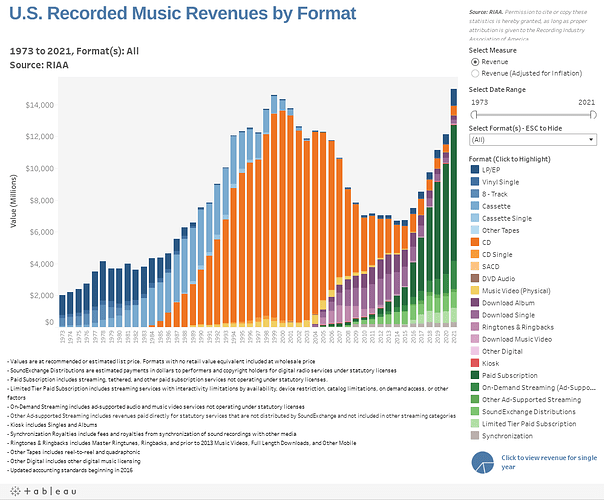 The RIAA provides the most comprehensive data on U.S. recorded music revenues and shipments dating all the way back to... Read More »

I think this is right. In the bigger picture, the convenience and ubiquitous nature of streaming will dwarf all physical formats. Vinyl resurgence, cassette resurgence, CD resurgence, 8-track resurgence?? doesn’t really matter next to the mass consumption of music online.

Physical formats are niche; will be so from here on out.

The first thing that strikes me looking at the chart is that the advent of downloading reversed a marked decline in total music sales, lasting 10 year, before overall sales started to drop again over following 10 years to the shocking low level it is now. I presume that the rise in online streaming accounts for the sharp decline in the past decade.

Looking at the boost with downloads. 20 years ago I had no awareness of the existence of downloadable music! However I wonder if its peak was people collecting things in the new medium, even replacing music they already had on physical media.

I wonder what the impact of blank cassettes was on new music sales? Now there is no longer the drive to record music perhaps the sales of downloads and streaming have taken that market?