So is it possible to have a single audio file with points in the file where the title changes? So, for example, something where the various separate titles in PF DSoTM are merged as one but the title changes as the playing reaches the points where the next joined track starts.

A file can only carry one item of ‘title’ metadata. What you are referring to is gapless, where one file flows into the next without a break.

tbh when I used to play CDs this would often appear to happen. So one audio track but as it played there would sometimes be a change in track number and title.

Now we have established you are referring to gapless playback, are you having an issue or is this purely an academic question?

This is an interesting post, is it easy to split up a single track into song segments that play back with zero gap?

I have a couple of Bootleg CD’s that have the whole show as 1 track. Not a big issue but this post made me consider the option of separating the tracks out.

It can be done using Audacity. Here is a screen shot. I’m not linking as it might count as a commercial link. It looks quite easy, so long as you have the software. You can even split yet retain gapless by setting the gap to 0.
Good luck! 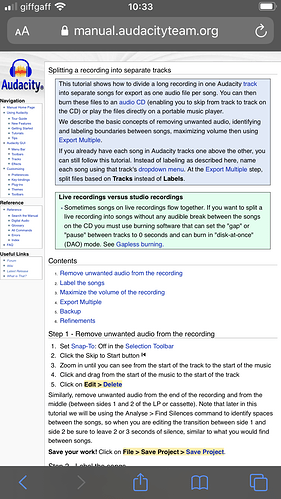 @anon4489532 legend! Thanks for that! MUCH appreciated. Its great to know its easy to do.

I’m not saying it’s easy, simply that it looks easy. I’ve never done it, and only found that page with the help of Mr Google.

Audacity is free software so it’s well worth having a go. Just make a copy of the big file first, in case it all goes horribly wrong!

I had a quick read and I think it will be ok for me. The other thing is in the screen grab you posted it talks about cutting out bits which I need to do at work for phone system menus! 2 jobs dealt with in one post. That was something I was about to look into today!!

Well I’m using BubbleUPnP to control my streamer… basically I really like it’s front end and how it operates with Bubbleserver in the background - it’s a nice package. However, although my streamer does gapless fine with it’s native app, it doesn’t with Bubble whether I tick the box or not for gapless operation in the app setup. So then I started to think about single files but with changes of title and/or track number as it plays.

Another method is to create a cuesheet file and then run something like cuesplitter on it. All you need to do is play the file writing down the times when you want to split. Then create the cuesheet file which basically says times and titles. Cue splitter will do the rest for you.

Came here to mention this. With a proper .cue file, a flac file of an entire LP can be split into separate tracks by quite a number of apps/programs. For example, the venerable XLD on OS X.

@hungryhalibut legend! Thanks for that! MUCH appreciated. Its great to know its easy to do.

I’ve used Audacity for exactly this purpose (a Skinny Puppy album (“Ain’t it dead yet?”)). The album was released on CD as a single track without indexing. When I ripped it, not being able to jump back to the start of a song was annoying, so I used Audacity to break into individual tracks with gapless play.