SL2 owners - What crossovers have you used?

SL2 owners - What crossovers have you used?

And how did they sound?

And, if you have used passive crossovers, did you screw them (just nipped up) to the holes in the back of the bass cabinet, or leave them loose hanging between the tweeter scaffold, or what?

Did you wrap the crossover in bubble wrap or similar, or just leave it as is?

I’ve been interested in what alternative crossovers would do, but to be honest the current price on them is pretty hefty. I’ve asked whether the components on the existing crossovers can be serviced, but the Naim response was that parts weren’t available, and I don’t have the skills to work out what replacement components (that might fit) would be.

Hi,
Likewise the standard passive crossovers. Screwed to the base so that they don’t compress too much the supplied rubber grommets.
I was also interested in third party designed and supplied crossovers but in the end never bothered to try them out. Probably because I could not demo them before buying.
The Naim supplied crossovers are absolutely fine to me. The only problem was a broken solder joint that was easily repaired. So it’s in the interest to dress NACA5 properly so it does not stress the connection to the crossover PCB.
Also with the last servicing that I did with my Naim equipment, I asked about the crossover service and it was said that it was unnecessary.

Just to say that I agree with what everyone else has said. Use the supplied crossovers, don’t over tighten the fixing screws and forget about bubblewrap. It’s not a good idea.

The only problem was a broken solder joint that was easily repaired. So it’s in the interest to dress NACA5 properly so it does not stress the connection to the crossover PCB.
Also with the last servicing that I did with my Naim equipment, I asked about the crossover service and it was said that it was unnecessary.

I too had a loose solder where the tweeter cable connected to the crossover when I bought them. I was fortunate enough to have someone who worked for me that not only had the skills and equipment to replace the solder, but also had the right solder to do so.

They’ve been sounding really nice since, especially with my recent 552 upgrade.

Sounds like that there is no need to change anything then. I also changed the tweeters. Lucky enough to get a set from musicline in Germany. They have now run out of stock. The speakers are sounding great and will eventually go in my second system.

Standard PXO. I’ve no intention of trying a 3rd partly product as the setup sounds sublime.

with my recent 552 upgrade.

Are you still on a NAP300 @JonoB? It seems like only yesterday you were selling your Superuniti!

Just screw in the screws so the grommets are not compressed.

Obviously discussion of non-Naim crossovers is not on here (FWIW don’t bother), so either just stick with the standard PXOs or go active with a SNAXO 242 and PSU.

Are you still on a NAP300 @JonoB? It seems like only yesterday you were selling your Superuniti!

Yep, this past year has been somewhat the upgrade year - the 552 coming so soon after the 252 was unexpected, but the opportunity was too good to pass up. And yes, I’ve still got the 300 (and loving it).

It’s the one upgrade that I have wondered about. Not in an I’m actively going to seek out a SNAXO (if for nothing else I’m very much out of shelf space in the frame), but more from the “while I’ve still got the 250DR and the 300 here, I wonder what it would sound like” perspective…

In this order: Naxo 2/4 (?), Snaxo 242 and stock passive, hanging loose seperated from the scaffolding with foam.
In my previous room running them active with 2x300s was the best I’ve heard them ( as they were designed). My previous room was not ideal for them being hard up against a stone wall though. Oh happy days…… 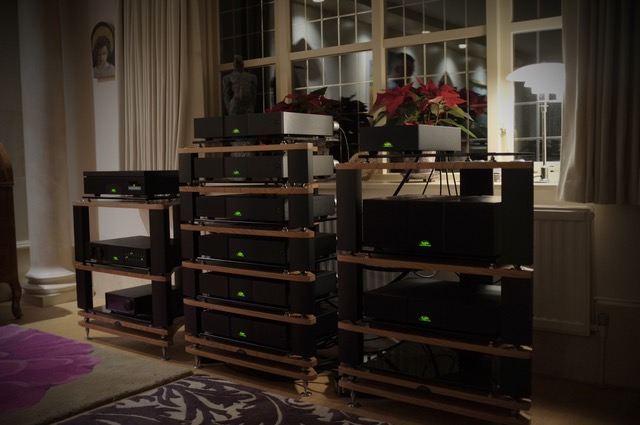 I’ve had SL2s running standard PXO with 552DR/300DR for 3 years. They sound great but I know they would sound incredible active with another 300DR up them. To do it properly would involve another 3xFraim shelves, another 5m Super Lumina speaker cable, another SCDR, Snaxo 242, another 300DR plus the Super Lumina interconnects. When you add it all up it’s just ridiculous so I’ll either stick with passive or look at Titans with the up to date PXO.

That and simply other priorities stopped me from going active. This would have required 4 extra boxes (300, 300PS, another Supercap, Snaxo 242). With 2 racks almost full and the suggestion not to do that before getting a 552. I quickly learned to appreciate what I had

That said I have never heard an active Naim system to be honest.

You will know of course that Peter now has a 500 and some PMC Fact 12s. Active can be great, but it’s very sensitive and much harder to optimise. And that is before considering all those boxes, shelves, leads and mains plugs. I believe that our friend @KenC has also simplified things and no longer uses active.

Going back to the original question, I had my SL2 crossovers unscrewed as much as possible, so that the pointed ends of the screws just held them in place. It seemed slightly better than having them fully tightened against the little grommets.

Thanks for this useful set of cases, which summarises the main variants as far as I can see.

We went from passive SL2 to active (552, 2 x 250, supercap, SNAXO). Active is unbelievable. Clarity, speed, organic sound, dynamics. Every superlative is good. So much so that it would be hard to return to passive - passive SL2 are extremely good.

We do not find active to be fussy or go out of tune. Sound wise it has remained very stable.

Active is a very good upgrade !

Think we all know that going active with SL2’s or SBL’s will gain better results than using the standard naim cross overs, if that’s the best way to go these days is certainly up for debate

I’ve only used my SL2s with the standard crossover, screws left as they are and they sound great (once properly levelled). Active not for me - too many extra boxes needed for that and I’ve got enough Fraim shelves as it is and definitely don’t want to add anymore.

You’re box coment reminded me, also all the extra naim boxes from running active that I had, well they would all hum together and quite loudly at times, glad I only have 2 now that do it, down from 8, as all the rest of my kit is perfectly silent.