@GadgetMan ‘s thread SBLs or save up for SL2? has got me thinking about the wall behind my SL2s. @Dunc observations also useful.

It’s a small room in our converted loft and the rear wall has plasterboard “dot and dabbed” on to original brick which is the partition wall between our loft and our neighbour’s (their loft is just used for storage).

A picture is always helpful so this is how it looks: 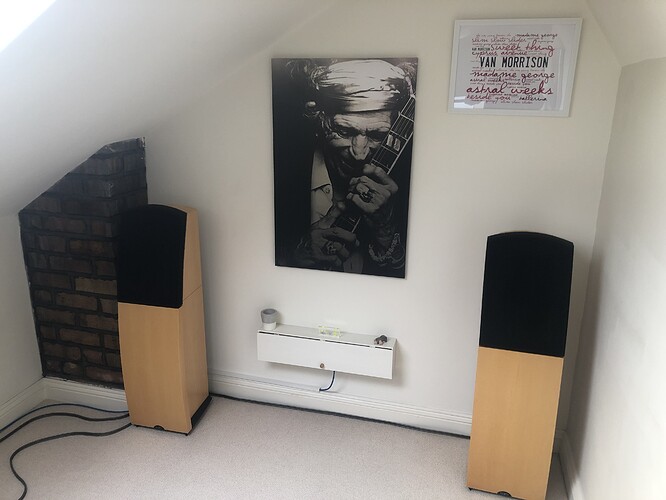 The SL2s have always sounded great in this situ. They have a fast “tight” bass and beautifully delicate treble response as one would expect.

However, I guess I’d call them slightly bass light such that I have been wondering whether to add a n-sub. I’d rather not need to do this as they are designed to go reasonably low without sub assistance and I know that other SL2 users on here - those with solid masonry walls tight behind them - report excellent bass response.

So - one option I’m toying with is removing the plasterboard from the wall so that it continues in the same way as the brick chimney breast to the left of the left speaker.

I don’t think this is particularly difficult job although the cleaning and possible re-pointing of the bricks might be!

I think it would give a nice effect visually in any event but I wonder whether it would have a significant effect on the SL2’s bass response? Any thoughts appreciated as I mull it over!

Don’t underestimate the mess you will create by removing the plasterboard! It takes a surprisingly large volume of dot and dab adhesive to fix plasterboard, and I would bet that the surface of the brickwork will remain covered in white-ish blobs however hard you try to remove it.
So my gut feeling is if it ain’t broke, don’t fix it.

…and if you want more bass extension, I think you’d have more luck with an N-Sub!

Would pitting a concrete paving slab under the speakers help? I have no idea really

My first thought is that in your system SL2s should be pretty optimal so maybe your ‘lack’ is actually the limitation of the design. Fast and tight but not great at the sort of sub generated frequencies that perhaps you are wanting?

One other thought, what is the floor? I am not an expert on isolation bases etc but that might be a way forward. Others will know better.

Finally I ran an nSub alongside nSats for a bit in a second system. What a fantastic, and subtle, device. Hard to find secondhand but might be worth hunting down before stripping the wall.

The SBLs and SL2s both produce good bass if it’s on the recording. I find my SBLs often sound bass lite and then a real bass note comes along and surprises me. Does this happen to you Dave? If it does I would leave the wall alone. Otherwise you may find a new set of bass problems.

Your dealer may be able to advise, and you could consider making acoustic measurements of the room and get professional advice? Just my thoughts anyway.

Brick can be very dusty, so you would need to treat it, or just plaster the wall directly, but as already mentioned, you might be losing Bass energy through the floor, and a solid slab underneath is probably a quick and cheap test

Hi DaveEngland
I’m a plasterer by trade removing plasterboard after drylining will be difficult if plasterer has used gyproc dry wall adhesive. It’s designed to stay put after application also attempting to remove dabs of adhesive will be extremely difficult.
Cleaning brick faces will be nigh on impossible, gyproc adhesive will always be in the grain of the bricks.
Hope this helps advice wise

Many thanks all. Good sensible advice. I will not be attempting this!

I know it gets said a lot, but isnt this Forum just brilliant. Most people are unlikely to have friends with similar HiFi interests, so discussions fall on deaf ears, but here we are able to have a good conservation, and help a lot of people out - just brilliant!

The SBLs and SL2s both produce good bass if it’s on the recording. I find my SBLs often sound bass lite and then a real bass note comes along and surprises me. Does this happen to you Dave?

I find that with my SL2s. They’re placed further apart than @DaveEngland (around 2.7/8m) and the left speaker is next to a wall (about 35cm away) the other in free space. The wall behind them (and the wall mounted n-Sats for AV) are brick that’s been plastered over (@omegaman ‘floated’?). The room has suspended floors but I had brick casings filled with concrete built on to the foundations underneath the SL2s (and n-Sub). The floorboards were cut to allow the speaker spikes to go through the carpet and into the concrete. I just wanted to remove the flexing of the suspended floor to help the bass.

I think it worked as the bass is very well controlled with music and movies, the n-Sub isn’t really needed for music even though it’s connected as the SL2s have plenty in this set up.

All the above work was done while the house was empty and being renovated so it was an ideal time to get it done.

I added this to the other thread, and just copied it over for you, its an idea that you could try if you feel the need

One way to fill the void is with dry sand, obviously this can have its own problems, as its very fine and will find any holes, and you will have holes, that you can’t see, but the fine sand will find.
But you would only need to fill the void to the height of the speaker.
If i was doing it, i would mix the dry sand with a week mix of cement, put it in dry, from a hole above each speaker, the air will set the mix over time, this will put less pressure on the boards and stop it spilling out if you ever disturb it

This will make the wall solid

It seems you have already decided not to go ahead with any changes but my experience might be relevant - left speaker backs on to solid outer wall, right speaker onto a former doorway that was filled in with plaster board and def not anything desperately solid such that if the neighbours go into the cupboard they have (in their downstairs loo) they can be heard. I originally had SBLs and then SL2s and never experienced any kind of imbalance between the channels that would suggest what the wall is like behind the speaker is a major factor. That might be because the floor is more important (very solid - limestone tiles on asphalt), or perhaps I have cloth ears

My ex dealer (he quit to avoid potential Covid exposure) used to run SBLs at home rather than SL2 when he had 500 series gear and maintained that the reason he stuck with the SBLs was his suspended floor was problematic with SL2s. I’ve never put either to the test myself.

I don’t think the floor or, tbh, the wall are a big problem for the SL2s. When he set them up Jason thought the chipboard on steel girders was absolutely fine. Although probably not as optimal as concrete I doubt it makes a big difference. Dunc’s idea of “filling” the cavity is an interesting one though.

My ex dealer (he quit to avoid potential Covid exposure) used to run SBLs at home rather than SL2 when he had 500 series gear and maintained that the reason he stuck with the SBLs was his suspended floor was problematic with SL2s. I’ve never put either to the test myself.

Glad I removed a potential problem!

To start off with you dont need to go full height, just above the speaker should do.
Mixing with cement means it will go off, so you end up with a solid bit off cement between the blocks and plaster board, so the weight wont be pushing the plaster board out, once its set, not much different to how a solid wall, with traditional plaster would be.
You could even do it bit by bit if you wanted, just leaving the mix a few weeks to start to set.
Also years ago on posh houses, they filled the space above the ceiling and floor with dry sand, to help reduce noice, this just sat on lath and plaster, a lot of weight for such a poorly fixed ceiling to carry, but it worked, but what a pain when you put a hole in the ceiling and get loads of sand keep falling out, yes i have done that lol

How big is the cavity behind that plasterboard, 2-5mm? You’d be hard pressed to use a couple of buckets worth of sand in that

Might it be easier to build another layer of brick against the existing plasterboard than trying to fill the cavity behind it?