Sound Effects In Other Rooms

I get a regular complaint from Mrs Mike when she’s working in the kitchen & I have something playing in the lounge. The problem is she gets a very deep bass resonance in some parts of the kitchen. Its more of a body/gut feeling in addition to the very low bass sound & this means she gets the body effects when all the cooker & other noises are going on but doesn’t hear the bass sound as such.
One solution is to close one or other of the interconnecting doors, but that doesn’t work complexly if the listening room volume is at normal listening levels, so I have to turn down the volume for full domestic harmony.
I know there is no simple answer, but does anyone else have this problem & how have/do you fix’um. ???

I don’t have the problem but the neighbors do

There is one spot in the apartment that has neighbors directly behind the wall, which is reasonably well isolated but still, I can make them hear drums and bass when turned up too much and make them “just feel” it at a volume before they hear it. As there is a wall anyway, nothing I could do but reinforce the wall which would mean taking out the kitchen. My room has good mode distribution in the listening spot but there is a pronounced bass boom in the corners of the kitchen, which probably contributes.

I even drew a picture last night for another post

the problem is bottom right: 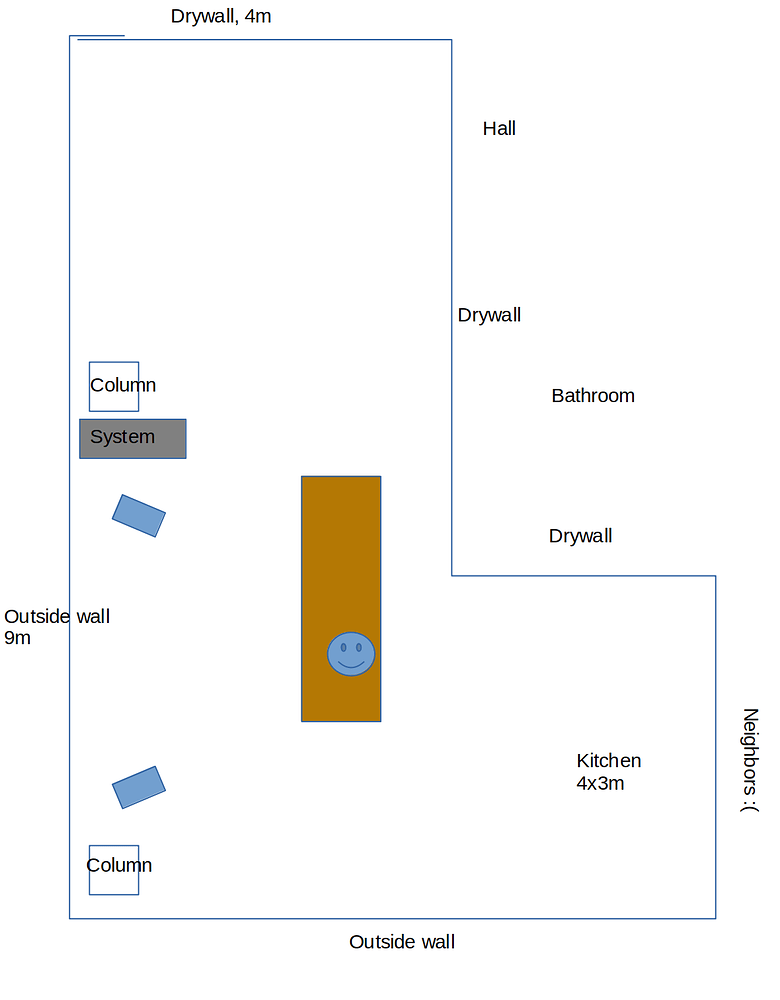 Fat chance of bass traps in the kitchen !!!

The separating wall between the rooms are block/brick & the kitchen side has high & low kitchen units.
I suspect there might be a path through the ceiling/ floor void.

I’m pretty sure the sound is airborne & that the path is listening room > hall > kitchen as closing the hall doors does reduce it. The offending sound/feeling in the kitchen is around 25 to 30Hz according to my meter & that corresponds to the aprx wavelength distance from speakers to kitchen via the hallway. So I will carry on with closing the doors unless someone suggest another way that works.

Airborne is one possibility, another is what is called in German a “Lärmbrücke”, which translates to noise bridge. Can occur in acoustically properly isolated walls/floors/ceilings that conform to building code generally, but parts that should be isolated from each other touch or have acoustic contact in ways they should not.

It is actually a common problem in construction. E.g. in Germany there are two DIN norms for acoustic behavior in modern buildings. The older one is required by the building code but not actually sufficient, it is from the 50ies IIRC and according to this one it is ok if the neighbor occasionally hears your TV and things like this.

The newer DIN is pretty good and is actually reached pretty surely if the building is built according to modern methods and codes, but no constructor is willing to certify it because all it takes to defeat it is such a “noise bridge” somewhere, and then this becomes very difficult to address, my understanding is that it involves removal and rebuilding of walls.

I researched this stuff when looking for my new apartment. I was considering a condo and discovered that this is a common problem for legal troubles when this occurs and you have to sue the builder etc. (because by law they are not absolutely required to fulfill the newer norm, so it becomes a matter of the judge agreeing that in a modern new building you should have a certain expectation, or not).

I am not a master-builder or architect, and it might be advisable to talk to one.

An open vs closed door can certainly make a difference! (I always close doors between listening room and other house occupants when playing music?) Depending on the door construction, adding dampening material to the door to reduce it actung as an auxilliary radiator, and/or droughtproofing around it may help.

In my house there is a sound leak from listening room to bedroom above in one corner of the bedroom. It is packed with mineral wool between the joists, to minimise sound, but there must be something like either e path within the wall itself, or somehow inadequate packing of the mineral wool at that point - but not easy to get into the space to assess, so just have to live with.

I would look at this from a different perspective. Put a Muso in the kitchen and turn on multiroom. You’ll probably never soundproof the two rooms, so work with it rather than fighting to control it.

Ok as long as the kitchen occupant likes the music! To work in my house if I was playing music and my wife in the kitchen I’d be very limited as to what in my collection I could play…

@ChrisSU, thanks for the suggestion, its an idea, but not in my house/kitchen.
Mrs Mike likes sing-along-while-you-cook-music & that means not with my wet Sunday mornings fair of rock, jazz & classical.
Or the reverse of that is if I had no choice other than listen to Steve Wright on a wet Sunday morning … bye. I’m off on a cold wet walk

Maybe a Walkman, then!

I find the whining sound goes if I close the door into the other room.

Maybe give her a pay rise ?

Those Townshend Seismic Isolation speaker podiums could be the solution.

Do the cooking yourself?