What I can say is that your system seems well balanced

But thanks for the info. I didn’t knew.

“Source first” is based on SQ not cost.

Saving up for a Ndx2 or a dac upgrade on the nd5xs2 to really balance out my system.

Some of us aren’t loaded though and it requires a hell of a lot of saving to make the next upgrade.

I’ve certainly got no desire to get to that level again however.

Is there any particular reason? Cost? Constraints?

I don’t have that kind of money anymore and since buying a property, I value the importance of money more.

I’ve been there done it and bought the T shirt .You don’t need to spend that much money to have a good system and have one you can be content with.

I had my 500 system in my forties and hopefully I’m a bit more mature now. I’ll post an image later on. 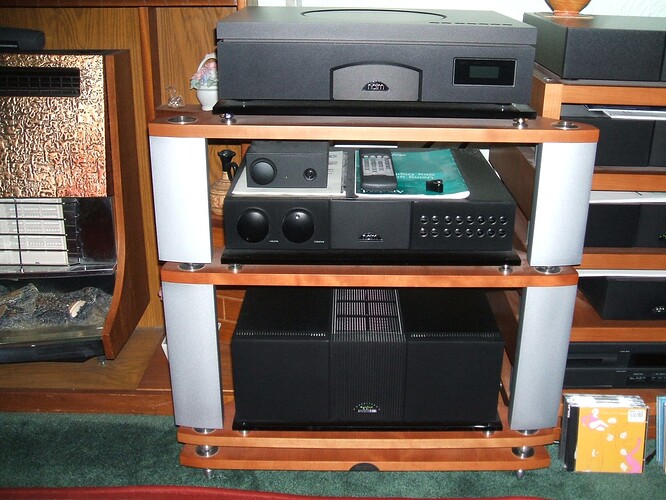 Of course you can improve the source, but I don’t think your system is out balanced.
At that time I had a Cd5xs with flatcap and 202/200. I found it very musical. The 282 gave me a bigger satisfaction than going from Cd5xs/ flatcap to Cdx2.
But Cdx2 / Xps2 was something on different level then.

Fair point but the price differential between top source and top amps doesn’t make much sense to me.

I believe that things just need to be balanced. IMO, The highest quality component dictates where the rest of the system should be. I first took care of my speakers, and that dictated that within the Naim product line, I would need at least an NDX2 and SN3 for there to be balance. The speakers should be able to reproduce the source and the amp should be able to adequately drive the speakers. Otherwise, there will be a bottleneck limiting performance.

Speaker size - well that is preference. Obviously larger speakers will be more expensive to achieve the desired quality over smaller ones. I definitely don’t think that speakers should be the least important component in the chain, but if left till last, they are often neglected.

I suppose the source does a single focused job and the amp is more complex.

Particularly with Naim where separating pre, power amp and power supplies increases the box count with the chance to increase cost.

Naim always advocate source first and spending the most on it budget wise, but unless you buy another 555ps for the nd555, the 552/500 is double the price of the source.

And then there’s the statement amplifier combo.

So on expenditure it seems amp first?

Until Naim release the Statement Streamer

Thanks all for the very interesting thoughts and comments.

looking at your setup, you are following the source first principle.

I guess if you are looking at cost, indeed it may look like I have followed a source first principle but in reality my system is one actually created around my ProAc Tabs 10 Sigs speakers which I like very much (and which I have chosen among many other similar ones, some quite more expensive). So, in other words, if one was to take these speakers out of my system, it might lose the most of what I personally like about its character overall.
I have selected my amp (as you rightly point out) based on how it sounds with the ProAcs and not the other way round and have preferred the Nait 2 to a few very decent amps, including the Supernait 3, for that reason. I have chosen my streaming DAC/pre and TT critically for SQ, overall synergy and usability but have not thought of them as most important (just the best of what I compared to and could afford at the time I’ve been buying them). Similar for e.g. my speaker cables and even my mains block, each of which costs as much or more than my speakers.

Very easy to obsess on what percentage of the spend should go where but it’s a simplistic perspective on a complex subject. Does it sound right? If it does then who gives a hoot what got spent where.

At one point I had an £800 cd source; a £230 amp and £600 worth of speakers and stands. On reflection it was probably the most wonderfully balanced system I ever had. No-one would have picked it out from a magazine. No dealer would have put it together as obvious but, through various fateful events, it came together and was commented on positively by all who heard it.

I later had the opportunity to try the source within the context of my Naim system . Had I heard it there first I’d have not gone near it.

I honestly don’t believe that there’s a right percentage to spend on anything. Hear your source through different amps and speakers and it’s a lot harder to say that source first is an ethos which bears prolonged scrutiny.

Perhaps source first, especially when it comes to digital playback, is less relevant today. Technology has advanced to the point where a transparent DAC can be purchased for a few hundred pounds, whereas a couple of decades ago a cheap CD player sounded cheap.

A recent upgrade from a 152 to 282 has really challenged the source first mantra for me. My XP5/ND5XS source into a 282 sounds amazing and clearly demonstrates how capable my source is on all levels. It just needed a more revealing preamp in order to shine.

If I kept the 152 and upgraded the source my experience proves to me that I would not have benefited as much as I have by swapping out the preamp.

If I kept the 152 and upgraded the source my experience proves to me that I would not have benefited as much as I have by swapping out the preamp.

It’s hard to tell quite what you’ve done when your actual system is different to that in your profile! While you have started with speakers, you’ve put together a well judged, balanced setup with a definite source first tilt, ie with strong sources, not necessarily sources that were chosen first, which is really nothing to do with source first as a system building principle. Speakers first would be where you bought say some ProAc D38s and with the rest of your money bought a Rega 3 and a Nait 5si. It’s pretty obvious that such a system wouldn’t be as musically satisfying as what you have now.

Might have missed it in one of the above posts but the room interface is above all. The worst thing in hi-fi is a one note boomy bass. I’ve had it in the past. Get that right and the rest is relativly easy.

The thread could be “Room First, System Synergy & Balance”.

“Source first” I suppose would be dependent on the context of the system particularly for an upgrade. For me, if upgrading, it’s pre-amp together with source, over all else as priorities, assuming the room acoustics is sorted.

If I had to be pressed to pick which “first” in an upgrade situation, the can of worms here, for me it’ll be the preamp always, anytime. WRYB [ whatever rocks your boat]. Since I hate having to make choices… will aim for both if I can… or just suck it in till I have enough funds.

In hindsight, after all the ding-donging, the “source-pre-amp” relationship is really interdependent for an upgrade’s sonics - many factors actually depending on the system which will determine what’s “best” - but we couldn’t do without either affecting the system as priorities. Either can be a bottleneck. Either is a bottleneck in the priority line. As with the room. Cheers.

On the other hand,
Composition of SN3 + HCDR + ND555 / PS555DR
Can definitely be a winning and final composition.
therefore,
The thesis of a low preamp / amplifier, will not take place here.