Hi I have a Unitilite.
I am looking at some speakers that are 86 db send… My room is about 3m x6m.
Do you think the Unitilite will drive them to high level ok

Probably not. You need to try them. What are these speakers?

Col,…It also depends on how much they “fall” in impedance at load.

Hope you understand my English,.and what I mean.
I can all this,.but do not know if I explain it correctly in English.

This is no problem Sensitivity is a poor indication of how easy/difficult a speaker is to drive.

I currently drive low cost Qacoustics 3010 bookshelf speakers from a Uniti Qute 2. They are 86db and a nominal 6 Ohm load. I’ve also driven 86db PMC Twenty.23 off it with zero difficulty. The case of the latter really worked much better with a better amp but power had little to do with that.

I should add that what this really means is, the number means little in the context of compatibility. Regardless of numbers, if you don’t try them with your amp, you are taking a risk. Maybe they can be driven perfectly fine… but sound terrible with the amp.

So first ask your dealer who has experience with the speakers, and then, if possible try them before you buy them.

They range between 6 and 9 ohms over the entire freq. range except at resonance where they go up to 32 ohms.
Cannot try them out as they are diy speakers and I would have to build them first.

To answer the original specific question, in terms of sheer sound level, theoretically that combination would be capable of achieve a sound level of at least 92dB at the furthest you can get from the speakers, and, if the Unitilite follows typical Naim practice of peak current capability equivalent to about 5x rated power, peaks of at least 99dB. Louder than that if you’re positioned closer to the speakers (and sitting against the back wall is not a good position unless the wall has a lot of sound absorbency). I.e. very loud to most people (and hearing damage territory if played for extended periods), tthough perhaps limiting of you want realistic levels from Tchaikovsky’s 1812 cannons. That is unless you pack the room full of sound absorbing bodies, as in a party. But as others have said, there is more to the amp-speaker relationship than sheer power, not readily predictable, though your quoted impedance characteristics suggest at least a benign load.

This not to put you off, far from it, but just so that you approach with your eyes open: Unless someone has built one that you can hear, any DIY speaker is a risk in that you may not like how they sound, but will not know that till finished, as well as how well any particular amp can drive them. Given how very different from one another even very expensive speakers can sound, some sounding good to one person but awful to another, it can be a real risk unless you have something to go on, perhaps like when a design is a clone of something familiar. (And of course you might be more forgiving of something you’ve made yourself.) Against that, the financial risk is much smaller than buying a commercially made speaker, and there is scope for modifying, or building a different design using the same drivers, for relatively small additional cost.

My only real question at present is can the Unitilite drive the speakers to a decent level.
I can modify the design if they are too bright or too dull etc.

Surely if you are building the speakers and comfortable changing the design, then you should be best placed to answer whether a certain amp can drive them? Eithet way, you’re about to find out.

My last post sought to give you that answer - though it depends on what to you is ‘decent’! For all normal domestic listening I think by far the vast majority of people would consider those sound levels to be more than adequate.

This image is pinched from a Stereophile review of the 805 from 1999. 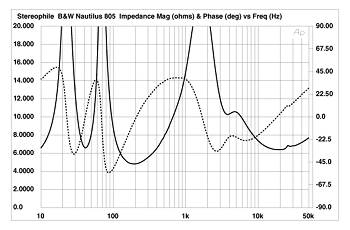 As well as impedance there is also phase angle to take into account. Roughly a high phase angle will suck more current than the impedance on its own so you don’t want a low impedance where the angle is high. This one doesn’t look too demanding, though I wouldn’t use a single ended valve amp with them an atom stands a fair chance.

Quite correct , but I know a lot more about speakers than amplifiers

Thanks.
My current speakers are 87db for 1 watt but are only 4 ohms no problem with them.

So, looking at this from a different angle, nominally half the power into 8ohms so 3dB less (actually likely a bit more than half, so less than 3dB). And 1dB less sensitivity, means on paper compared to your present speakers you’d expect about 4dB quieter for the same volume control setting.

Would seem no problem then