Hi all, new Atom and when I play through Spotify it connects to atom using Chromecast and I can’t get atom to use spotify connect. When I got into spotify then devices the atom won’t show up. Naim says log Atom into spotify but I can’t find a way to do that. Any help much appreciated!
Thanks
jh

Have you used the guide published here?

This did not work. The spotify app shows up with chromecast icon on it. Can’t get it removed.

What happens when you click on the Spotify icon in the Naim app?

It appears with chromecast attached. There is no other option other than airplay

Just tried it on my Star… I usually play Tidal/ FLAC or Internet Radio, so it’s been a while since I last played Spotify. I vaguely recall having had issues too months ago, but it’s been so long I do not recall if that was the same use case as yours… When starting Spotify via the Naim App, when I open my Star as the playback channel from the Spotify app, it’s clearly playing over Spotify Connect. So no issues with this Uniti unit. What firmware is your Atom on?

This will be the wifi router blocking mDNS / Apple Bonjour traffic for some reason.

On new devices Spotify uses this discovery mechanism to find the device. Once found and the user connects then it then registers inside the Spotify cloud and its then easier for it to connect to it.

And after all that, it should work like this. 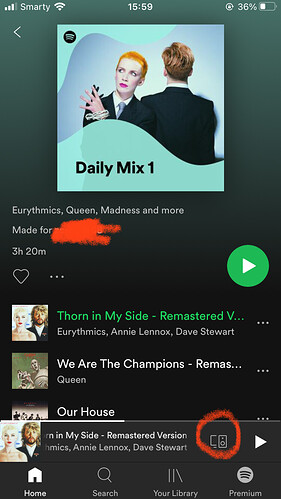 Select your device, click on the 3 dots on the right hand side. 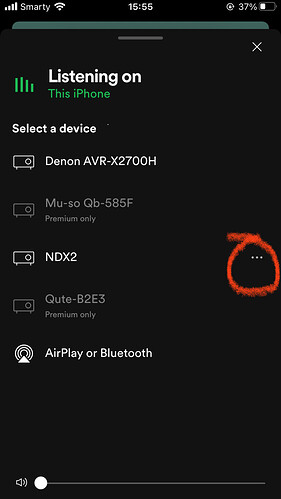 Maybe a restart of your phone might be a better first step to try. If that doesn’t improve matters then go through the steps I listed above.

SOLUTION. Odd thing. We could see the Atom via airplay but not connect via spotify. So we brought the troublesome atom to my house where connection via internet etc was perfect. We plugged it in and my friend was able to connect to his Atom easily. He then took his Atom back to his place where the internet/router was a problem and the connection he made at my house was continued and all was fixed. So something very odd was at play in my friends internet to precent spotify from seeing his atom. Hope that makes sense