I own a Stageline N which I love.

A few months ago, it developed an intermittent problem which has since become permanent: At my normal average listening volume, the signal from the left channel is now only around 25% and the signal from the right is about 130%! The problem remains even if I reverse the RCA cables coming from my turntable, i.e. the left channel is practically silent while the right channel remains louder. Also, the frequency response seems to be altered because there is less bass than usual.

My Stageline N is powered by a Nait XS. I also have a perfectly functioning Stageline S so the problem is not with the Nait XS. I also tested a second SNAIC5 cable that I had and the problem persists. Then I used a 4 to 5 pin DIN cable to share the signal output with another input on my Nait XS and the problem appears on this input as well. Finally, I tested 2 turntables and 3 different cartridges and the problem remains. I also opened the case and looked at the circuitry to see if there was any obvious indication of the problem but my untrained eye did not detect any anomaly.

My intuition tells me that this is either a problem with the RCA or DIN 5 INPUTS of the Stageline N but I would like to know if anyone has already had this type of problem and what are my alternatives before entrusting my device to a repairer and lose it for more than a month accompanied by a hefty bill.

Sounds like the Stageline needs service attention. Perhaps @NeilS has an idea what’s going on here.

It certainly sounds like you have isolated the problem to be with the Stageline N.
The increased level on ch.2 is intriguing!
Any chance you could post a picture of the internals just in case I can spot anything?

Many thanks to Richard & Neil for such a quick response!

Tell me if the photographs are suitable; I could photograph specific areas as needed.

After looking at the circuit again, there are only two things that make me wonder: there are a few strands of unwelded wires (looks like they are broken - impossible to photograph …) at the left channel signal white cable connection to the RCA jack and the left channel 470pF load capacitor is “blistered” on the sides. 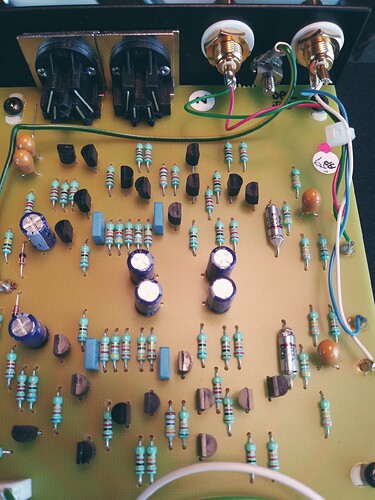 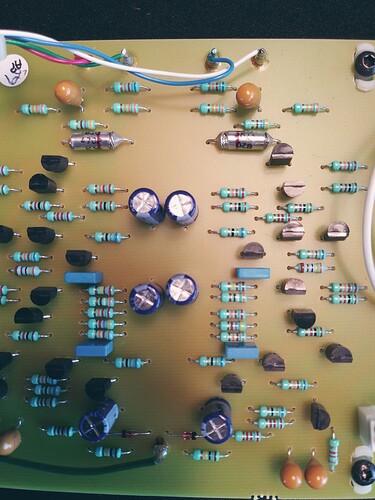 Service required - ? When was it last done…?

I bought it used a year ago because I was very impressed with the Stageline S. I rarely used my N because it was used for my Mono system and it only corresponded to 5% of my listening time.

Lately, I bought myself a Nagaoka MP-200 so the Stageline N has become my main phono. I turn off my system when it won’t be used for 24 hours. At the beginning, it made me this problem 1 time out of 5, I then had only to turn off and restart, but it became 1 time out of 2 and since last week, nothing makes it possible to bring back the signal.

As I bought it used, I can only trust the seller’s word and he told me that it had never been serviced.

Do you know whether the original owner used it with a non-Naim power supply?

I unfortunately don’t have this information. I’ll ask him for for the sake of the record. I know that he owned a Flat Cap 2 and later an HiCap DR.

Hello everyone. I am rewriting to confide in the grief that overwhelms me and also to keep this post alive so that other Stageline N users can get relevant information. After 39 days at my repairer (authorized by Naim), they told me that they were checking with Focal-Naim Canada for the price of a new board! They told me that they took 4 hours to change almost all the components without being able to correct the problem! So I’m still waiting for the estimated amount but let’s say that at $ 90 CAD per hour plus the price of a new board, I’ll have to say goodbye to my device dating from 2011. Beautiful Christmas in sight …

Martin - please accept my humble apologies, I haven’t been watching this thread!
It may be my eyes, or the camera angle, but something doesn’t look right with the ch.2 RCA socket. The core of the socket looks offset with the white isolating washer, meaning the socket could be shorted to the chassis.
Something for them to check perhaps?

. I am waiting for their call maybe tomorrow. By ch.2, do you mean Right channel? Unfortunately, I think I erased all other pictures I had of the board. Anyway, thanks again!

Yes that’s right - the one with the red wire.

Would your hypothesis work even if I tested by plugging in one RCA cable (coming from my turntable) at a time, so the left channel only, then the right channel alone? I hope I am clear…

IMO, you should not be responsible for the long time that your Authorised Repairer has taken.
Thats not your fault…

I think if there is a short between chassis & signal ground it could have the potential to effect both channels and compromise the entire unit.
A quick continuity test between the RCA outer & the earth screw terminal with a multimeter would confirm or dispel my theory!

A quick continuity test between the RCA outer & the earth screw terminal with a multimeter would confirm or dispel my theory!

Hi Neil - I’m curious as to where the earth terminal connects to on the Stageline. It looks like it’s connecting to signal ground on the PCB ?

Indeed it does connect to the PCB, it may be for connecting the DIN socket outers to chassis earth - I will check it out.
I could be completely wrong of course & all the earths are common!
I recall some test failures where the RCA ground ring had been fitted on the chassis side of the isolator though. Mmmm…

OK, so the verdict is in: the residual value of my stageline is less than the repair costs. Focal-Naim Canada refuses to provide plans or a complete board to my repairer. The latter mentioned to me over the phone (but I did not understand anything) that this is an intermittent problem that is difficult to detect because the device could work during their tests and suddenly fail. He mentioned words to me like “transistor polarity” and “resistor problem”, blah blah blah. What particularly shocks me is that the repairman is associated with the only store in my area authorized to sell Naim devices and one of the main selling points at the time was that being a “fully discrete” design, the device could be easily repaired and last a long time. He mentioned to me that a 20% price increase in Canadian dollars for Naim products was coming as early as January 2022 so I had to factor that into my replacement calculations …