My son is turning 18 and I would like to give him a small entry-level system. The room is 16sqm and the speakers will have to stand on the sideboard with little space. So small speakers. Streaming is enough. In a 2nd step i can have one of my two old Thorens set up on occasion and add a small phono preamplifier. Any ideas. I would set a budget between €1,000 and €2,000

iPhone and airPods or Beats

Rega system one. Except you have the thorens already.
It’s the io amp, kyte speakers, p1 deck and all the cables. 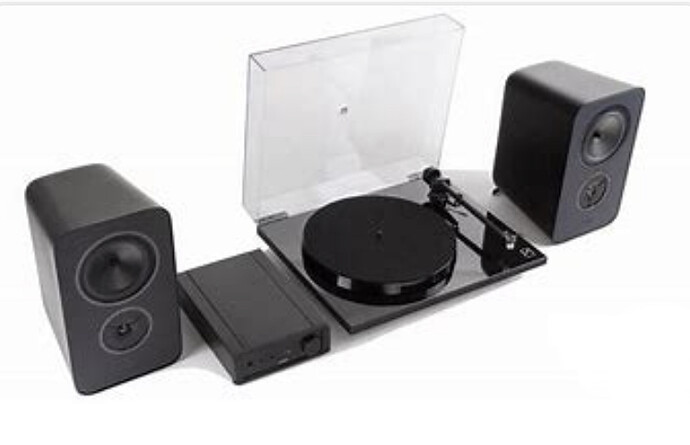 How about a Muso Qb for streaming. Plug a Turntable (with a phono preamp) in via the analogue input later on ?

Would also suggest the Rega One system, just add a streamer.
But the second-hand route is also a good one to take, use the Thorens TT mentioned above, buy a secondhand naim all in one, unitilite possibly and some speakers.

Surely the question you should surely be asking, “Dad”, is what does your lad actually want?

Been through this with two 18 y.o. daughters…….

It was only when dau2 got a home of her own that she “discovered” hifi**.

Blusound Node, Nait 2 and a set of Nsat speakers. Would easily come within budget.

Don’t be silly - giving your children what they don’t yet realise they need is part of the fun of being a parent, as is getting it wrong from time to time. Giving them exactly what they (think they) want is by no means the best course of action.

If you want to give your son a nice starter system, @Cledi13, and he doesn’t want it, he can always flog it!

I’d build something around Neat Iotas.

part of the fun of being a parent

As a teenager (40 years ago) I would have mortified if my father thought he knew what hifi I wanted.
Agree with @suzywong - what does HE want?

For that age I would do a Sonos sound bar and their sub. That way he can use it with his tv and his phone. Easy to move and he will use it all the time. When he is 30, then it’s 2 channel time. Kids at 18 now have different hifi dreams and uses than 18 year olds did in the 60s, 70s or 80s.

I would be cautious as well. For my son’s 18th I bought him a Cambridge integrated and Monitor Audio standmounts that I thought was really decent for the price (note the use of ‘I’ there).
He’s not changed or upgraded it in 9 years (!!) and still seems happy with it. For him its the convenience of laptop music and quantity over quality. He’d rather spend the money on weekend festivals seeing live bands … which is how it should be really?

My 30 yr old was looking for something for his apartment and ended up getting 2 Sonos Fives. He LOVES them.

As a teenager over 40 years ago, my father knew exactly what hifi I wanted and helped me buy it.
Different strokes for different folks.

When I was 18 I bought myself a used McIntosh system. SS amp and tube preamp with decent belt drive TT and excellent cartridge, and hybrid ESL’s. I worked at a swimming pool so I made a little more money than my peers.
My father would never have bought me a stereo system. My parents hated my music.
There is a much nicer inter-respect between us and our off-spring these days. I also provided two of my daughters with vintage audio systems and they love them.

If streaming is enough, what about a Muso ?

Careful of not falling into the analogous ‘buying your ‘son’ a train-set’ mindset.

My son wanted a Sonos. A side by side demo with a QB settled that. He’s had the latter since he was 14 and it’s one of the things he uses pretty much every day. A turntable is largely a commitment to buying things he as yet does not have the income to afford. The sort of thing you don’t want to see go to waste but which will when parked alongside streaming.

I’d also say that whilst the Rega set up is on paper a great idea it’s generally been propagated by people who’ve not heard it. It’s okay but nothing which would actively encourage vinyl or even music listening as an interest.

I’d ask him what he likes. Does he show any interest in your system? Both my son and daughter listen to music on their phones and computers. Son 18 says some of his friends have records, but they are unplayed collector’s pieces, they listen to the downloads. I don’t have a turntable and they haven’t grown up with the ritual of playing LPs. My daughter will stream her music to the muso sometimes and I play it most days. When we had a music shop in town, we would go in and see records played. Daughter was bought a cheap CD player by her Grandfather and I ripped CDs for her. So I’d ask him what he really wants.