OK - So I know Vinyl is renowned for the occasional static pop, but recently, the static - resulting in really loud cracks and pops whilst Playing is making my music unlistenable

I have tried an anti-static mat and a carbon fibre brush, but the mat is sticking to the records and I am having to peel it off every time. The static cracks are every few seconds. Nothing has been changed with my system. Any suggestions as to what I can try?

A Record Cleaning Machine (RCM) is good not only for cleaning records but also removes static as well.
Use of anti-static inner sleeves prevents the static from coming back.

I’ve never had anything as bad as ‘hearing’ the static though. Nylon carpet?

I don’t think the carpet is nylon - and it certainly hasn’t been a problem until recently.

I use anti-static sleeves and I’m getting it on brand new records. It really is unlistenable at the moment.

Hi Mike I use a DS Audio Ioniser while playing records keeps static off, stops the loud cracks and pops you mention, also helps when you put the records away into their sleeves 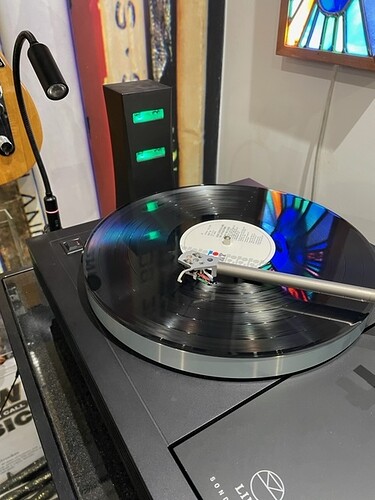 Static would make your mat cling to records, but not necessarily cause loud cracks and pops during playback.

Forgive me if you’ve done this, but my first rule when LPs start sounding poor is to have a look at my stylus. If you have a magnifying glass (or better yet, a loupe – a cheap and essential LP accessory, IMO) take a look-see and make sure the stylus is clean and free of hairs, fuzz, etc. If your cartridge came with a brush, break 'er out: 8-10 swipes from back to front.

My experience is that some LP’s just seem to generate static - and can lift the Linn matt. Annoying…

A wet clean generally cures any such disc…

New LPs are possibly the worst for static. I’ve had severe difficulty getting some out of the sleeve!
The scary bit is the mat being lifted and then dropping off and swiping the stylus

I would also recommend to clean the records. I also had that problems with my new LP12. After washing the records the problem is gone.

There aslo could be the possibility that your room is too dry because of heating in winter. So maybe you could first try to put humidity in your room, eg. with a big bowl or so

I’ve just tried boiling a kettle continuously in the room for 5 minutes to increase the humidity. This has definitely improved the static of the mat sticking to the record, but I still get the loud cracks. Maybe I need to investigate the stylus. I have cleaned with the brush and I believe it is good condition, based on comments at its service last year

'New’LP’s… Lols. I have not bought a really new LP for decades…

But… some of my vintage stock still seems ‘staticky’. The risk to stylus damage is a real one, I think. I would rather (now) wet clean any LP’s which exhibit staticky-ness…

(I do have both a Decca brush & a Zerostat - but neither seems to really fix static, like a wet clean does.)

I had a problem similar to the one you describe but my pops were only once per side roughly but extremely violent. Changing the cartridge cured it for me.
Good luck, I know how frustrating it is.

I was always a sceptic regarding RCMs. However I eventually took the plunge with the very affordable Project. The static issue literally stopped overnight. In three years I have not had a single issue with static on my Linn. For me this was the biggest single win from owning a RCM.

Evening All - Here’s an update on the progress I have made.

When the static was at its worst it was when I had the log burner blasting away at full pelt, which I think dried the air out and made the static worse

An evening of tinkering with my son, who has an electrical engineering background and my father-in-law who at 76 and has been a vinyl fan for all his adult life, concluded that for the static to sound that bad, there had to be an earthing problem.

So, our hypothesis is that the felt mat was insulating the vinyl from the platter and the earthing system in the turntable. The Rega Phono MM, which doesn’t have a metal earth in its transformer is unable to effectively earth the static. The Rega Aria however, has a metal earth and a 3 pin kettle lead connector enabling effective earthing

My question - how does the Rega Fono MM effectively earth the static from the turntable without having its own earth?