Well know audio reviewer in the US in his latest video was naming his best speakers he has ever heard. On the list was the Focal Grande Utopia speakers which he praised for their large soundstage they producted he could not remember what kit was being used but as this was at a hi fi show i suspect it would be Naim Audio, high praise indeed.

suspect it would be Naim Audio

Ha! Clear as mud. Focal are aligned with Luxman instead of Naim in some territories. So we really have no idea then.

Obviously didn’t hear them in the Naim demo room.

He interviewed Simon Matthews a while ago. (I’ve just looked at the comments below, because the moon landings were mentioned there are loads of moon-landings were faked comments.)

He mentions the RMAF two or three years ago, so it was probably this: the Focals with NDS and Statement. What impressed him most was the size and scale, though he seems silent on other perhaps more important musical qualities. 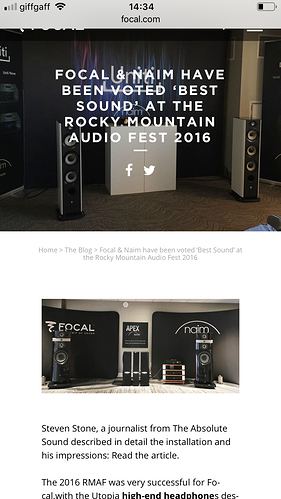