Oh I see, I miss that. And yes one would think that the new streamers would be, not only more resilient to streaming issues, but also have a more satisfactory factory support time. I very much hope so.
Cheers.

It happens when threads drift

Hi David,
I had a visit today morning from the Internet Provider people, and they checked everything, from internet signal to TV boxes, substituted some cables and signal splitters, in the end they said everything top of the scale.
After lunch I tested the streaming and everything was wonderful till… another dropout. In the same place of other times before, I believe.
Ok. S…
Then I finnaly could reach a tech guy recommended by the Naim distributor, and he told me a strange situation, some routers have a “garbage colector” routine, that from time to times, cleans the internal buffers, and that is problematic for certain hifi/video equipments. Netflix have a special treatment by the Internet Providers and their routers, so problem is circunvented there. Maybe my old router don´t have that function, new one somehow has.
What I can detect by running PingPlotter pinging tidal.com is a latency peak from time to time, and that is correlated to the Naim dropouts.
Solution, he told me, is a good “home” router connected to to the “internet service” router, this one serving only to provide internet access. But this has other implications, like where to put it / space in the cabinet, configurations for accessing IP cameras outside house, new WiFis, etc.
Other solution that I have, I´m testing it now, is using a Mobile Hotspot, so now my Hiqute2 is now in Wifi mode like my Android phone, the two connected to a portable 4G Mobile hotspot. And… till now, works fine !!!
So, I have to conclude that some ISP routers cause problems in streaming, and 1º Gen Naim (at least Hiqute2) suffers.
Possible solutions are:

What do you think ? Makes sense using two routers at home ?

Interesting. Is this internet router supplied by your ISP? Did you talk to your ISP? If I book internet service, and certainly a 500 Mbit, I would certainly expect that it can maintain a lowly data stream of maybe 5 Mbit/s so that my music streaming does not skip!

(A 2nd gen streamer would most likely solve it too, as it has a 50 MB buffer, but I really doubt it should be necessary and your ISP should sort it out)

Until a couple of years ago, this forum was plagued by posts from people with 1st generation streamers who had dropouts with Tidal. The problem stems from the fact that the streamers were developed for local streaming of your ripped CD collection from a NAS, as the likes of Tidal didn’t exist, so Naim had to shoehorn web streaming support into a platform that was never really designed for it.
The main issue is the very small buffer which can run out quickly if there is too much delay to the stream. Tidal have servers all over the world, and the one you use can vary from track to track, so the problem can come and go without warning. I’m not convinced that a different modem/router will make much difference. Certainly your own LAN is only a very small part of the chain, and unlikely to be the cause of the issue. Different ISPs will vary, as well as the location of the Tidal server, so you may find that switching provider (again!) will help.
If you awant to keep your streamer, there are workarounds such as Roon or BubbleUPnP Server that can help. They work as a proxy server that buffers the stream, and sends it on to your streamer as if it was a local server. Or move to a current streamer which has a larger buffer and other optimisations that can handle lossless web streams better.

@ChrisSU makes some very good points (as usual). Chris, and a few others are the only reason that I finally got my Synology NAS/Minimserver working properly.
Having said that, in manufacturing engineering, one spends up to a quarter of one’s time doing ‘process of elimination’ routines to fix problems. After reading your in-depth post which does actually eliminate many of the possible problems and then further illuminates a few other possible causes, I, myself, would next try tackling the suggested second modem issue. The reason for this is, you could have a modem delivered via Amazon, and if it doesn’t fix the issue you can return it after a week or so of testing at no cost to you, save possibly a small return shipping charge.
If it works, great. If not, little cost and very little time required, and on to the next item which is most likely in Chris’s post.

In a parrallel theme, I added a Cisco 2960 Ethernet switch to my network to hopefully improve the SQ of my streaming signal. After I installed it, I began having a multitude of network issues which seemed to mostly be thru the interaction with the ‘Home Hub’ of my quite basic, 65" Samsung Led TV. But it affected the computer as well, as I use the TV as a monitor for it. It took me forever to figure out what was wrong, unitl I finally put the cheapo TP-Link switch back in as the first, and main, splitter for all of my Network components, and just daisy-chained the 2960 over to my Naim audio gear with a BJC Cat 6a cable.
So now, everything that connects to the TV, and the NAS, and the 3 computers; works just fine, and I’m almost positive the SQ of all the digital music sources has improved from the addition of the Cisco 2960.
So, best of luck, keep at it, and let us know how it goes. There are quite a few others here that are having frustrating dropout issues with both the legacy, and even the new digital tech units, and could use some helpful guidance.
Cheers.

Well Chris,
Problem was the TIDAL works just fine before the ISP service upgrade to 500Mbs and the new router came.
After came the dropouts.
Btw my turnaround, seeing in the photo, that little white 4G Hotspot, works flawlessly. Problem is this ISP router . 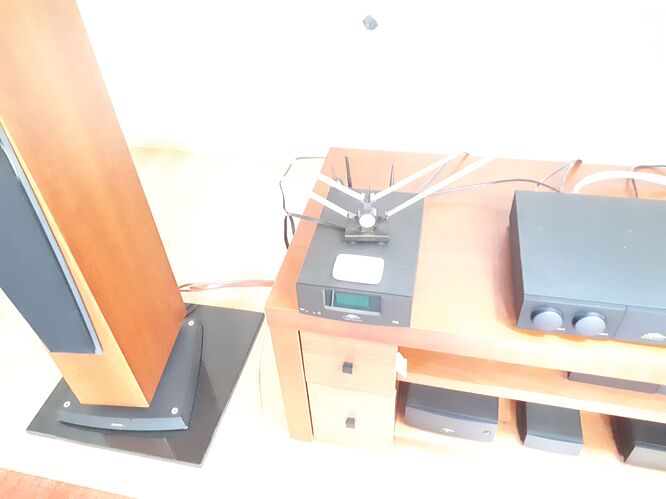 If the same ISP is providing your faster service, I think you will find that they have made other changes behind the scenes rather than just giving you a new router in order to provide the increased bandwidth. The issue could lie in the router configuration, or something else behind the scenes. I would suggest you get in touch with their support service and explain the problem this ‘upgrade’ has caused, and ask them to look at latency in particular.
ISPs do seem to vary enormously in the quality of their support, and their willingness to investigate performance issues. Perhaps suggesting that you might jump ship and go to a 4G provider who does not exhibit this issue might persuade them to help you out if necessary.

And the sun came in the internet, by a new ASKEY router, in replacement for a HITRON one, done my ISP after a lot of arguing and pushing.

So, finally after 1,5 month of TIDAL dropouts, my Hiqute2 is singing again.
Thks to all inputs received, that help me to focus on solving the problem (basically I went a friend´s house and borrow its recent modem, and notice that it solved the problem, then I push the ISP for the replacement ).

And one of these days my CDX2 will arrive too from NAIM factory.

Thks to all of your inputs, that helped to solve the problem.