Streaming music services in the UK

The timeline of music sales is quite interesting too: 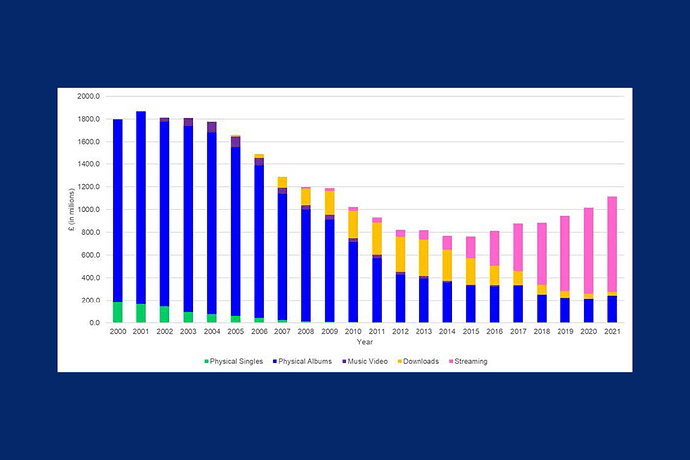 Wow.
I really like Qobuz but didn’t think it was just as niche.
I hope business model works at this level of market share.

I’ve just switched Qobuz and it’s superior to anything else imo. I’ve tried most of them. Can’t believe Spotify without a hires offering has such a share of the market.

I’m willing to bet that good old free YouTube has more listeners than all of those services put together. Especially the deep underground music that none of those other services offer or have access to.

I really like Qobuz but didn’t think it was just as niche.

Maybe Qobuz data didn’t get included – didn’t arrive on time when the French courier got stuck in Dover; trying to get through all those parking lorries and pesky tourists blocking the roads…

Was thinking the other day, are we in for another Netflix style collapse for streaming services, can the niche HiRes ones survive, i hope so.

Was thinking the other day, are we in for another Netflix style collapse for streaming services, can the niche HiRes ones survive, i hope so.

A very good question. In many ways I think the niche services self-select customers prepared to pay a bit more, but costs of living are biting the majority now. I’ve already cancelled Tidal, still have Apple Music and Qobuz for now. I have not renewed Audirvana Studio subscription and will probably cancel Roon - came to realise I mainly use the Naim app for playback.

I’d cancel Netflix if it was only me watching but the rest of the family uses it extensively. Prime pays for itself very quickly. Haven’t had Sky for over a decade and don’t miss it at all. Britbox good value for £30 per annum on a half price deal, but let’s see what happens once the ITV take over and rebranding occurs.

Wow.
I really like Qobuz but didn’t think it was just as niche.
I hope business model works at this level of market share.

Yes, Qobuz is very good but more so if you prefer less popular/mainstream genres.

The Sublime packages offer generous discounts on download purchases in hi-res but while I often purchased in the past, I do so far less now and mostly stream.

Qobuz nearly went bust a few years ago and were bought out. I hope they have a secure business model but they’re up against huge competition from the major players.

I’ve just switched Qobuz and it’s superior to anything else imo. I’ve tried most of them. Can’t believe Spotify without a hires offering has such a share of the market.

The reality is that for the majority of people around the globe cheap or free music is what they want. This has always been the case unless you’re someone for whom music has a special place in your life and leisure time.

Hi-res audio is a marketing gimmick for the big players like Apple and Amazon - if it’s nigh on impossible for audiophiles to stream their services in hi-res or lossless CD quality natively on their hi-fi without jumping through hoops, the average customer has little chance of doing so on any but a few select products which may not be good enough to hear a difference in the first place.

The vast majority of consumers probably just think great I’ve got hi-res or lossless audio playing but don’t realise their playback devices/wireless earphones or headphones can’t support it technically and are playing lossy tracks. I dare say this will change in coming years, but even if new devices add more and more support the majority will be in the cheaper/affordable end of the spectrum so ultimately may not harness any hi-res or lossless benefits enough to make much difference.

I think most audiophiles agree that lossless CD quality streaming is much better than lossy audio, but many still aren’t convinced by hi-res lossless either.

Interesting. The market share split is yet more ‘proof’ that traditional, multi box, hifi systems are becoming ever more niche. The vast majority of people have no interest in such systems, preferring simple streaming via phones, tablets, etc

This means that hifi kit will become ever more expensive as manufacturers try to shore up profit revenue in the face of declining music sales.

They have always been niche, the majority of people have always bought all in one systems from radiograms to combi systems, mini systems and portables. Now it’s all combined in small unobtrusive devices such as BT, AirPlay, Google or Amazon speakers. Those that want a bit more quality, Sonos and Heos fill the gap.

Also quality of all these devices has increased tenfold as technology has and it’s closed the gaps not so much for the higher end which has remained constant, the world caught up and there isn’t a huge place for hifi to go really.

I have number of systems built from low and mid priced priced kit and I am really wondering why I bothered with Naim at all as the other give me just as much enjoyment if not more as they are user more and don’t seem to suffer from the same idiosyncratic behaviour and a healthier bank balance to boot.