I have two Rottweilers for a total of some 160 lbs and when they “brush up” against the Fraim that tends to be more of a brutal hip check. I recently noticed that two glass shelves had slammed into the stanchions hard enough to chip slightly at the edges.

I’m training the dogs to stay away from the Fraim racks, but until the time comes that they give them space I decided to take preventative measures. I have added little rubber bumpers, so the shelves bump harmlessly and back off the stanchions. It doesn’t look as clean but it will save some grief in the meantime. I thought I’d share this tip for those in similar situations. 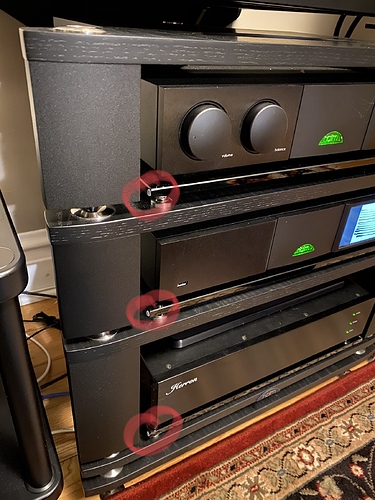 Remember that Naim supply stick-on rings to go on the glass and which perform this very function.

As HH advises above, maybe some of the stick on Fraim protectors would be a good idea here.

I’ve been thinking about that as well, but this seems a simpler, less invasive solution for now, and more easily removed. Maybe when I rebuild the Fraim I will put them on.

We used to have a very chunky Black Labrador, and an LP12 on a Sound Org table that was the perfect height to take a direct hit. He was a very happy character, so his tail was always wagging, and it’s a miracle that he never managed to destroy the arm.
On the other hand, the cat we had at the time liked to sleep on the LP12 lid. He would often jump onto it from the floor, and the stylus never once skipped a groove.

They fall off… eventually.

[quote=“JosquinDesPrez, post:1, topic:6001”]
I’m training the dogs to stay away from the Fraim racks,

Well, good luck with that. I have no idea how difficult it is to train Rottweilers.
I recall having similar troubles with my Springer Spaniel…but then the old saying holds. "A Labrador is born half trained and a Springer dies half trained "

I’m not sure the plastic rings which affix to the underside of the glass will be a match for a heavy Rottie - many of my rings fell off, some didn’t want to stick from Day1 and others had to be chiselled off (so to speak). I fear the shelf with the plastic rings may lift a tad/the rings detach if brushed with some force.

I think the better solution is to be found from child/corner protection products for the glass e.g. like simple rubber/plastic (I know…) corner protectors - which you may have already done(?).

Rottweilers are extremely intelligent and learn quickly. I have the younger one in professional obedience classes now and he is doing very well. The older female will follow. I suspect within a few months they will have learned to give the Fraim some space. We are already making some progress with that.

You’re the second person to note the plastic rings fall off, so I think I won’t bother and will stick to my rubber bumpers. Even if those fall off it takes a few seconds to put another one on.

I assume the rear metal post/rear edge of the glass is OK? I will admit to dropping a shelf on edge when cleaning and was surprised at how easily the glass chipped.

That’s great to hear. Springer’s are also very intelligent. Far too intelligent to be trained

I haven’t checked lately, but they were fine when I checked earlier.