After years of enjoying listening to music, but being an utter neophyte to the workings of music, I’d like to take some time and educate myself on the basics. Primarily looking to cover the elements of music (tempo, chord progression, melodies, etc.) but also interested in music history and discussions on instruments (could I eventually speak somewhat intelligently about the differences between oboes and piccolos or telecasters and stratocasters). Any suggestions on books (or websites) to get started with? Thought the fine folks on this forum might have some good ideas. Thanks!

Does your local college do further education or adult learning courses at good prices? That can be one good way to get do this.

That’s a pretty broad syllabus. How about learning to play an instrument?

There are many good programs on Radio 3 and they are far less confined to ‘Classical’ music than they used to be. There used to be one where a performer or conductor analysed a piece of music, playing excerpts and finishing with a performance of the work.

@Innocent_Bystander’s suggestion has the merit that you meet similarly enquiring minds.

Indeed, reading revolution in the mind about Paul’s use of diminished eights (or some such) I just glaze over. I even have trouble recognising the Bo Diddley beat. It would be nice to have some of this explained.

Having said that there is the sausage making analogy.

i’d second learning an instrument or studying music production at a tech college. As a guitar player I got into quite a lot of music through wanting to understand it from a playing perspective and then into how music worked through wanting to make it. I found as a grew into my playing my appreciation of music went from being predominantly aesthetic to learning to love music based on how well it was made, the artistry in the composition, arranging and production as well the aesthetic artifacts of the genre. This lead me off into all kinds of weird and wonderful musical niches that I would never have tried otherwise… Also made tons of like minded friends through playing together… 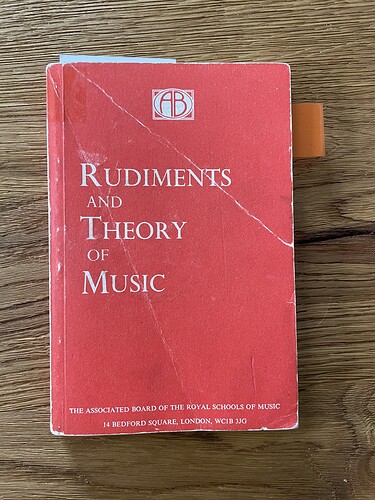 You could always get a copy of this, the ‘little red book’. This is the book I used when studying for theory exams. It says £1.20 inside! It might cost a bit more these days, but you’re bound to be able to find a copy on eBay. It’s still something I’ll refer to, particularly for translation of those musical terms which I don’t remember.

Gosh I haven’t seen one of those LRBooks for years.
I seem to remember mines was as well thumbed as yours.
I lent mine to the daughter of a member of staff together with my pair of clarinets when she was learning to play and haven’t seen it since.p got the clarinets back tho.

They dismantle songs, singing technique, vocal production, breath control and can be quite fascinating and somewhat addictive.

Tank the Tech is a roadie who pre COVID worked in the Rock / metal world and as well as reacting to the song discusses equipment, pyrotechnics and staging.

There are lots of others most of which are ‘clickbait’ e.g. Ghost Love Score by Nightwish at Wacken 2013 is a very common reaction video which usually results in an invasion by the Nightwish Army which increases their subscribers ( and hence affects the YT algorithm).

A good instrumental teacher will be able to teach you plenty of music theory & history. Unlike a book or web resource, they will be able to respond to your questions and interests.

So, pick an instrument and find a local teacher. If you really don’t want to learn an instrument, you’ll find lots of teachers will be happy to ’just’ teach the music appreciation side of things.

I did a music course at uni in the 90s and one of the texts was ‘What to listen for in music’ by Aaron Copland. It’s a very good read if you are interested in the development of music from early chant to 20th century orchestral.

If you get a chance to see Aurora Orchestra playing from memory, there is usually a commentary that breaks down what the composer is doing.
There are links to some parts from their website, then of course the proms performances from BBC.
I thought I had an understanding of theme, variation, quote etc, I learnt a lot more from listening to them.
Similarly, a performance of Vivaldi, Four Seasons by Figo Baroque Ensemble includes the poetry said to be the inspiration and makes the understanding of the patterns, reiteration so much more enjoyable.

On YouTube, I’d strongly recommend Rick Beato, a musician and producer, who deconstructs music of all genres, though primarily rock, and offers insights into what makes songs great. He regularly does a Spotify Top Ten breakdown, particularly wearing his hat as a record producer, and also has a long running “What Makes This Song Great” series - currently on Episode 107 - for the full playlist see: https://www.youtube.com/playlist?list=PL54ggFZMKOzQn72ZzPO3hnUVIj78Zuuee

Great suggestions, thanks all. I have a few books inbound, though admit learning to play an instrument and/or auditing a class are probably the ideal ways to do this and are on my bucket list. @karmachochi - I watched Rick Beato break down Radiohead’s Paranoid Android and within a minute thought of @Sloop_John_B’s comment on the sausage making analogy. It was fascinating to see the elements of the tune, but a bit over my head at this stage (or maybe any stage). Next up, books on electrical engineering so I understand how these black boxes with the lime slice work.

Another vote for Copland.

I’ve taken a series of courses from beginning theory to music analysis. Just finished analyzing the score to West Side Story. Now going back in time to Mozart piano sonatas. We pretty much stay with diatonic works (except for the twelve-tone, four-part dance fugue in “Cool”).