I’m taking my first steps into MC cartridges and have just purchased a Superline and ordered a Denon DL-103 and “The Cap” accessory to try at a later date. I liked everything I read about the DL-103, and I figured it was a good place to start when upgrading my old RP3 and Ortofon 2M Blue cart.

I’m looking at the Superline and Denon DL-103 specs and I’m not quite sure what to make of the combinations of plugs and such. This is all brand new territory to me, so I’m trying to understand what this all means.

I caught an older posting, but I don’t make heads or tails of that response. It seemed to lean towards the setups for the DL-103R cartridge versus the DL-103.

What are the appropriate plugs, if any, should I be using (or trying out) for the DL-103 on the standard Superline?

You’ll have 1kR and 500 R plugs in the kit, it will likely be one of these, I suspect the latter will be closest. Too high and the sound will be a bit sharp, too low and the bass is a bit loose. Leave the capacitance socket empty to start with, though you can parallel resistances using it to make a few other values. Both the 1kR and 500R together will make ~333R. The superline will take a while to settle.

The Rega arm is a bit on the light side for a 103, which won’t be helping the bass quality so you might try the cartridge Cap sooner rather than later, say after a month, which is also about right to revisit your plug choice. Once all else is done try the 1nF plug in the second socket if it’s empty of a second R plug and see what it does.

I’m amazed that the Denon DL103 is still available to buy new. It must have been first manufactured in the 1970s, or maybe even the 1960s.

I recall that it was originally intended for radio broadcasting, with the very heavy pickup arms that were prevalent in the Swinging Sixties, and was adopted by Japanese audiophiles for home use.

I’m amazed that the Denon DL103 is still available to buy new.

Same here. Its been around forever. And its very cheap - err… good value…!!! The web tells me they were first made in 1962. So… a bit younger than me, but not much…

Yes, I’m not sure the 103 is ideally suited to the Rega - it works best in either a Unipivot or a medium high to high mass tonearm.

It’s an odd one the 103 - in many ways it’s a bit of a dinosaur, and definitely not one for digging out “detail”, or for anyone wanting an incisive top end. However it’s reliably consistent, and can provide a huge soundscape with deep, if somewhat loose bass. It’s not what I would call a particularly “fast” cart, but it works well with the sense of “drive” of an idler deck. Its weaknesses can be addressed through a better stylus (ESCO) and removal of the plastic body, however, you then have something rather different, and you do perhaps lose a little of the charm of the original cart, as well as adding considerably to the cost.

As to loading, you’ll probably prefer anywhere from 100-500ohms. I do wonder though whether the Rega arm will be a good match (as I say, I suspect perhaps not) and also whether the Superline may be a bit too forensic in uncovering the weaknesses of the standard 103 that might be better masked with a more sympathetic combination of partnering arm and deck.

It would appear that although not much has changed on the DL103 over the years, modern examples may well be little higher in compliance than the very earliest ones, albeit still definitely in the range of “low compliance”.

I think saw mention of different stylus shapes - ? New ones being Shibata.

“The Cap” is an add on aluminium body cap for the 103 that requires no modification to the cartridge. It takes the cartridge weight to 12g which brings the combined effective mass up to 23g, still not quite enough I suspect but the compliance at 10Hz is in some doubt, it’s quoted at 100Hz and usually a multiplier of 1.7 is suggested. Probably best to get a test record with some resonance tracks like the HiFi News one and check. Soundsmith make some heavy cartridge bolts I see so maybe those could help, as long as there’s enough counterweight.

Gotcha, yes I was reading a bit more up on this and have seen a lot of folks mentioning that the DL-103 is for heavier tonearms.

I could return it (or sell it along withe The Cap) and find something more suitable or a safer bet for the RP3 tonearm. Here’s the others I was considering:

I ran a 103r in my P3 and it was just fine. Not as good as the Krystal in my LP12, but then not the same price bracket by a loooooong way.

So far it’s all theoretical, none of us have said we’ve used a 103 on a Rega. It all hinges on the compliance, which Denon give at 100Hz, as 5cu (I’m being cavalier with the units but it doesn’t seem to matter as the number at the front is always the same no matter which are used and it’s this number that goes in the calculators). The conversion factor of 1.7 is in some dispute with Martin Collums suggesting a compliance of 12cu at 10Hz in a review I’ve seen referenced but not checked. If this value is correct than it will work fine in the Rega, a compliance of 10cu @10Hz is borderline using my favourite calculator (See Korf Audio) with the weight of the Cap and 2g of screws etc. I’d say give it a try and put some effort into finding an optimum loading.

I contacted Zu Audio and asked them about their DL-103.

They said their DL-103 was compatible with the RB303 tonearm/RP3 but recommended using the Groovetracer counterweight.

At this point I decided to just go with a Hana ML. It seems like a better fit overall and would be a better match for the Superline.

The Zu DL-103 and counterweight put you in the same ballpark price-wise (with a current sale on Hanas) and I prefer to keep it simple.

At this point I decided to just go with a Hana ML. It seems like a better fit overall and would be a better match for the Superline.

A sensible decision, I think. Going for a more ‘normal’ or typical MC.

Sensible given it’s first steps into MC but not as interesting for the audience.

Who are not paying…

I found the 103/RB301 on the RP3/24 quite engaging actually. Still using it on a second system.
Great cartridge. 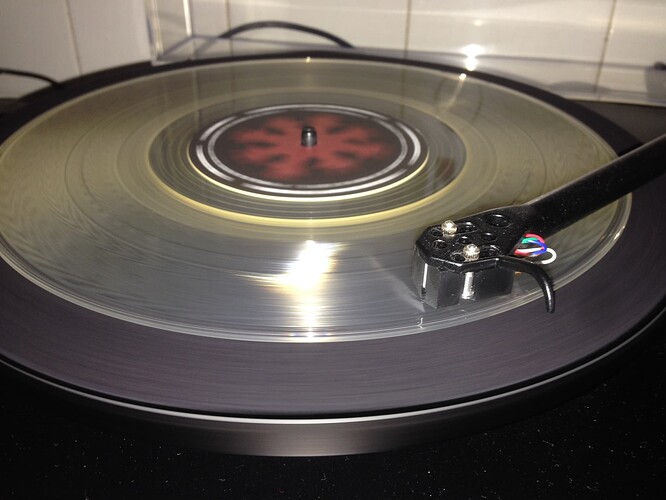 No extra weight and the GT you refer to is simply an original 10” pressing of The King Of Limbs by Radiohead on clear vinyl.