Starting out with naim I borrowed a nait 5i and a 112x/150x. Easily to this day the 5i was the most exciting system to listen to with tons of naim signature PRaT and lively as hell. I had Dynaudio standmounts at the time.

But after a couple of days trying them both out the separates easily beats the cheeky little integrateds. Same with integrated higher up the ladder. Never heard any XS vs SN3 myself but I would imagine that in the long run and If consuming a bigger scale of different musical genres one would pretty much always go for the more refined and grown up sound

Then again you are only guessing.

Plugging into the wall will not change the character of the amp, you could say he never really heard his XS at its best either. Your logic is flawed…

as for the character of the amp - the SN3 has a DR regulator whereas the Nait XS3 probably uses the older LM317 regulators so they are bound to sound different.

I am firmly in the camp that the newer DR regulators are the better ones.

The Nait XS is more forgiving of such set up mistakes the OP has made, and that I made a decade ago when trying both out at home…

I did like your answers on another thread that the bigger Naim amps may have more stage and resolution, but not necessarily much more musical enjoyment.

That is also my finding…

I love the hydra. Peace of mind.

Having owned for two years a SN2 and previously for 3-4 years an XS2, both types, and trying various psu’s, Powerlines, Hilines, Hydras, strips etc etc, i can confirm, the character of both amps remain, regardless of all the other stuff. I also had more than 2 versions of the XS whilst owning the SN2.

sure but nothing really new - the old 200 vs 250 debates (I own both and on the surface the 200 may seem faster, but there’s a whole midrange that the 250 bring to the table along with more clarity on the frequency extremes, and the 250DR is just as fast, but with much bigger bandwidth so the brain/ear has a lot more information)

before the OP goes back the the Nait XS3 though he would be well advised to try Naim speaker cable… I’ve tried a number of speaker cables and the character of the amp also does change with the speaker cable used.

Is it XS1 merit or the weakness of SN1 ? 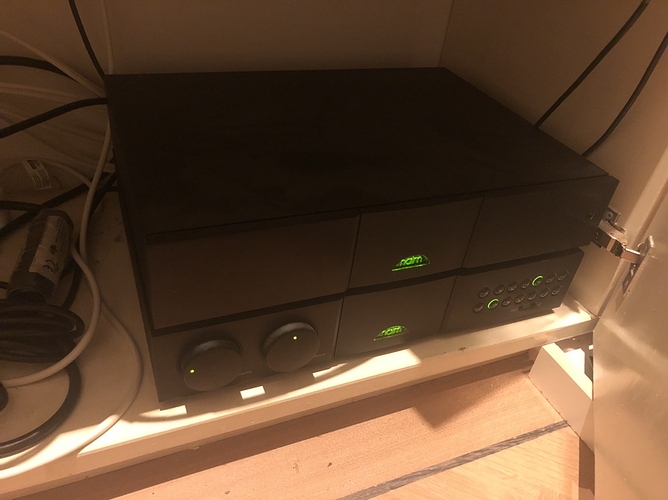 I need to get a proper shelf in there.

Maybe my ears are not as good as others but I chose the xs3 because it not only sounded better than my old Arcam but also because it was one simple well made box with built in phono. Got it home, plugged it in, forgot about it. Love my music.

I now plugged the SN directly into the wall. Can only plug the SN directly into the wall, not the ND5XS2.
Still didn’t solve what I hoped for. The punch of the mid drum bass is simply lacking compared to the XS3. Treble, detail and soundstage are all good but it just sounds bit boring to me without that mid-bass impactful punch. Still awaiting my new WH Phantom cable to try if that brings back the excitement and punch in the sound. The XS3 is much fuller and punchier it seems.

Dave
What make/model of audio grade socket did you have installed as this is something I’m interested in doing too?
Many thanks
Jonathan

Strange. The SN3 should be a better amplifier

You still should try a naim speaker cable

Are you using the naim powerline lite cable that came with the amp ?

Are you using the naim powerline lite cable that came with the amp ?

I am in the Netherlands so I am using the standard provided schuko cable, not the powerline lite

Unfortunately I can’t switch it directly into the wall

as I have only one power socket in the wall there so I am using a cheap standard power block.

If you only have one power socket and everything goes to the power strip which is connected to that one socket at the wall, my suggestion is to invest in a proper power conditioner or generator instead of a strip. Something like the Audioquest Niagara 3000. I am not sure how much the Supernait 3 is affected by the mains or quality of power strip but I am convinced you will hear a significant difference if the mains or method of powering of components is properly addressed.