Despite being an early adopter of Sound Organisation turntable table, I’ve been a little bit skeptical of the impact on electronics. This is a cautionary tale : a friend discovered some wooden cones on that eBay that he mentioned to me and as they weren’t super expensive (and in my case emboldened by Russ Andrews selling something similar in the past) I took the inexpensive plunge also. I was pleasantly surprised by the finish and solidity and set about the utter faff of setting up as you can see in the picture.
So did it make a difference? Heck yeah! It absolutely ruined the sound,

I was gobsmacked by the difference, leaden, lumpy, muddled, slow, actually had me checking to see if Tidal hadn’t switched to 320k by mistake but no, getting back to my friend he was also scratching his head, rotten, just rotten, so I’m now convinced wrong supports can make things way way worse, but is there a cheap way of making it better I wonder?
Bear in mind a four shelf Fraim Lite is four times the price I paid for the NAIMs…not going to happen. 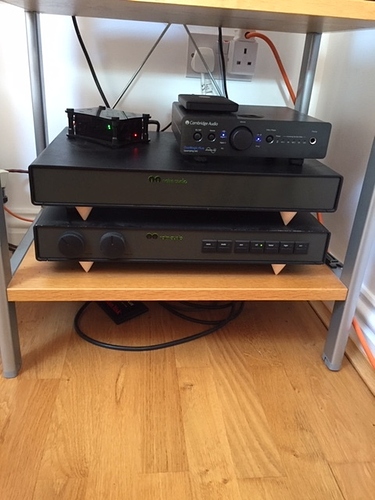 Give the 92 and 90 a shelf of their own and don’t put anything on top of them.

if I could I would, hence the disastrous experiment with cones!