Interesting, what version of iDrive is your car on?

Happy to check - is it obvious where I can see this info?

I use a 120gb ipod ( recently had the HDD changed out for an internal SD card. Not that it matters for this). And, it connects to my Audi A6 fine. As it connects via a regular usb b it should not matter what the other end looks like. I’ve used my iPod in the last 4? cars that were vw before the Audi. The car just sees it as an organised mass drive.
So, it should work on your BMW. Sounds like your dealer needs to do something to make your car recognise the iPod. iPods are low tech stuff in the 2020’s. Which is why I paid £100 to breath life back into mine with a new HDD ( SD card). Btw, the iPod place in Ashford told me that leaving the iPod in a cold car is what tends to kill the HDD.

My two previous cars were BMW X1’s and the same iPod worked fine in both of them and still does in my partner’s 2016 2 Series. I’ve pointed the dealer to the web page that says the iPod Classic is compatible with the new car so he’s investigating and has promised to get back to me.

Good. I can’t see a reason why it should not work. Make sure your dealer sorts it for you. You don’t need to be buying a newer iPod.

Mine is on MT-002.138.001 so it looks like a newer version.
I tried doing as you suggested by setting the iPod Classic to play before plugging it in and it sort of works. 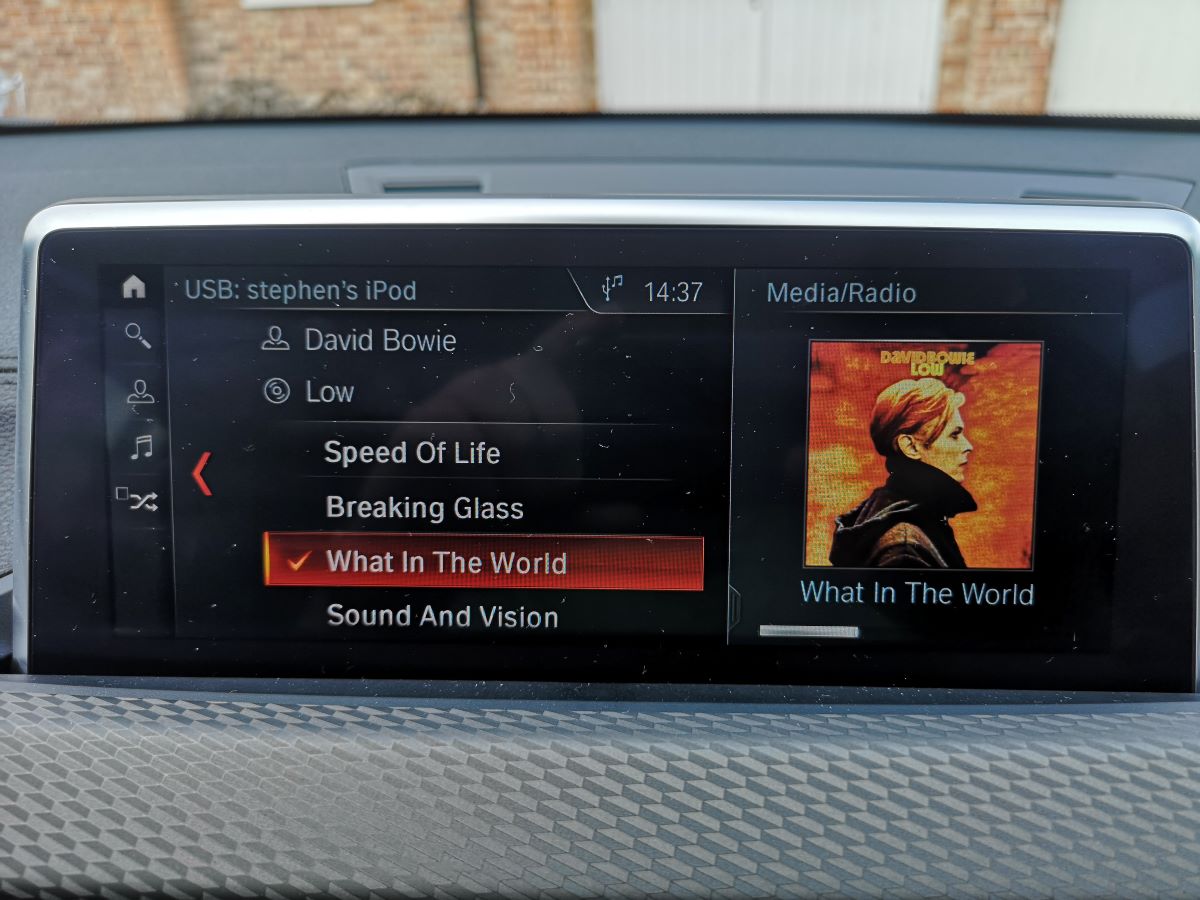 However all I can do at that point is use the scroll control in the car to move between the album tracks and play them, it still won’t let me browse or search the iPod. So if I want to listen to another album I’d have to disconnect the iPod, find whatever I want to play and re-connect it. Hardly ideal.
Did you have to install anything on the iPhone to get it working in the car, and was that through USB or Bluetooth? Would you mind saying what car you have? That could be useful information to feed back to the dealer.

Sorry, EDB, the details from your original request didn’t sink in. I only ever use the ipod on shuffle in the car - I don’t browse. I’ll have a go though. (In fact I fill the ipod with this in mind too - I get it to fill the available space with tracks as I have too many.)

Ah right, I never use shuffle as I prefer to listen to albums. In fact on one occasion I thought there was a fault with my ND5XS2 as it was playing tracks from an album in random order, only to realise I had inadvertently tapped on the shuffle icon

Doesn’t look like I can browse by artist or track. It could be driven by what is initially selected on the ipod - you had Bowie and I had the whole shuffle - but I only thought about that after I’d come in from the car!
I’ll see if I can figure out how to download the latest version of the iDrive software onto a USB stick.
The car’s an M140i although that looks irrelevant now.
If you were going on a longer journey you could build an iTunes playlist of several albums and you’d probably be able to play them in the pre-selected order.

It is your mistake. You should have bought a Pinninfarina, with a Naim system. That one is compatible with your audio setup

Steady on, surely a humble Bentley would be perfectly sufficient for your average Naim user?

The last time I tried to copy my music library to a USB stick, I just dragged it using a Mac. To update it, I dragged the same folder again. OSX asked me if I wanted to keep the existing files on the drive, or replace them with the (identical) versions, so I just told it to keep the originals. So in effect, a differential backup.
This goes into the USB port in my car. It doesn’t read the metadata, but you can browse the folders by artist/album and see the track listing. Any more than that would be a distraction that I wouldn’t want while driving, so I choose not to find a more sophisticated solution with metadata support.

What you might find @ChrisSU, is that there are a load of extra marker files that have a fullstops at the beginning of a filename, and this can look a mess when you are browsing. If it helps, below is a script you can use which will look to see if you have inserted a USB drive called either CARMUSIC KITCHEN or NAIM, and then syncs the folder “/Users/Shared/Music” to that USB stick. Your folder will be different of course, so just amend line 3 accordingly. The advantage of the script is the tidy it does at the end to remove the majority of those extra files.

Copy the following into a file called say “SyncUSBMusic.sh”, and then open it with the App Terminal. Any Problems, let me know.

Thanks, but simple drag and drop has always worked perfectly for me.

certainly my Ford Focus used to show them when browsing, which was a pain

Still no progress on this from the dealer. What I’ve done in the meantime is get myself a 128GB Sandisk flash drive from Amazon for £15. I’ve used the backup from my NAS on a portable hard drive to convert all the FLAC to 192kbps mp3 (that’s good enough for the audio system in the car) and copied the resulting 65GB worth of mp3 on to the flash drive. Plugging that in to the car’s USB port works perfectly; I get all the artwork and track information and the search by artist, album etc all works fine too. It does take about half a minute after starting the car for the search functionality to be active, I’m assuming that is the time it takes for the car to read the metadata in the files on the flash drive? dbPoweramp took about 9 hours on a fairly fast computer to convert the FLAC collection to mp3 and about 1.5 hours to copy the mp3s to the flash drive.
I’m reasonably happy with this solution but the workflow to get any new music on to the flash drive is a bit more of a faff compared to syncing an iPod with an iTunes library but at least I’ve got my music in the car again.

@GavinB if you are thinking of doing the same for your car, I noticed today that the car system doesn’t handle multi-CD albums well. If the metadata Disc tag says 1/2 and 2/2 and the tracks are numbered from 1 in both of them then the car system is ignoring the Disc tag and ordering them by track number so the 1’s come first then the 2’s and so on. Quite annoying especially with live albums so I’ve edited the metadata to start the track numbers on the second disc following on from the first

Thanks, @elverdiblanco, I might give that a try, although I’ve had problems with this approach in other cars in the past. As I’ve mentioned, I tend to just listen to music in shuffle mode in the car, and when I’ve tried it on USB sticks previously, the shuffle isn’t actually shuffle, it plays the tracks in exactly the same order (albeit not the numerical track order). Argghh! I’ve therefore got the impression that many cars are really only set up to work well with Apple. I hope this is changing.

What did surprise me is that the car system would play FLAC even at 24/96 quite happily. I just converted my library to 192Kbps mp3 for the car so it would fit on a £15 128GB flash drive rather than a much more expensive 1TB flash drive and as I said mp3 at that resolution is good enough for the car system, to my ears at least. BMW really are Apple focused, even the dealerships. When my partner bought her 2 series the BMW Genius didn’t know how to pair an Android phone with the Bluetooth in the car