Synology nas 218 and artwork on ndx2

Hello. My music is stored in a pool on a Nas 218 Synology. And I’m looking for the perfect software that allowed me to see the album covers that are there on my NDX2 via server. Currently I see only one note of music for each album and of course nothing on the screen of the ndx except the famous note. Thank you

It really depends how you ripped the music originally or where you downloaded it from.
The NDX2 will only display what is being sent to it from the NAS.
Also, you don’t mention which server software you’ve got installed on the NAS drive.
Many people here use Minim Server or Asset.
I have tried both and prefer Asset due to the interface and general appearance.
I see every album artwork, so it is certainly possible. Most of my CD’s were ripped using my Naim HDX which stored them all as FLAC files, with the album art stored in the same folder with the name “folder.jpg”
Note; all albums artwork are called “folder.jpg” so don’t worry that they are all the same.
If there is no artwork in the folders, you’ll have to add it, either using your ripping software or some other software such as dBPowerAmp.

Where did you get the music from, if CD rips how & with what software did you rip them. Or are they iTunes, or other bought in files, and in what format, FLAC, AIFF, MP3 ?
What media server software are you using, Synology’s own installed package ‘Media Serve’ or another such as Asset or Minimserver.
Whatever all the above should always give you album art, so if not I suspect it something very basic that’s wrong.

How I do it … & its not difficult or time consuming, it can all can be done without moving from the armchair.
I have Synology DS214 with Asset UPuP media server is installed on it, this auto-links to Naim iOS app on tablet or smart phone for browsing…
I get music two ways
1 - Rip CD’s to FLAC on laptop using dBpoweramp, dBpoweramp always finds & embeds the correct artwork & ready to be uploaded to DS214
2 - Buy download albums from the www vendors, these have imbedded artwork.

I have a 218 and an ndx2. This is how I get artwork to work.
I use iTunes to rip. Then I manually add the artwork via iTunes. Either from a scan of the cd or via Internet.
Trust me, thus works everytime. Bit time consuming though.

You should check out https://dougscripts.com/itunes/scripts/scripts13.php if you use itunes.

Create a smart playlist with the first track of each album, select the tracks and then run the script to create folder.jpg.

Also discogs is a great source for album art.

That seems a like real faff, if thats what it takes to use iTunes, I say don’t use iTunes.

It’s not really, I use the default Synology UPNP app and that looks for folder.jpg to display the album art.

Once the tracks are selected you can just leave the script running, after it’s completed you just need to run it on any new media you rip.

I’ve always my long-winded method embeds the album art within each file? I’ve not tried just sticking an .jpg file in the album directory. Would that work?

No, its has to be embedded in the file.
This can be done with one of the open source programs such as Mp3Tag.

But if these problems are caused because using iTunes, I question again why use iTunes,
I tried it once, & once was enough.

Download an album cover from discogs, rename it to folder.jpg and place it in the directory the tracks are.

It depends on the application on the NAS that’s controlling the streaming, if you’re using the Synology Media Server:- 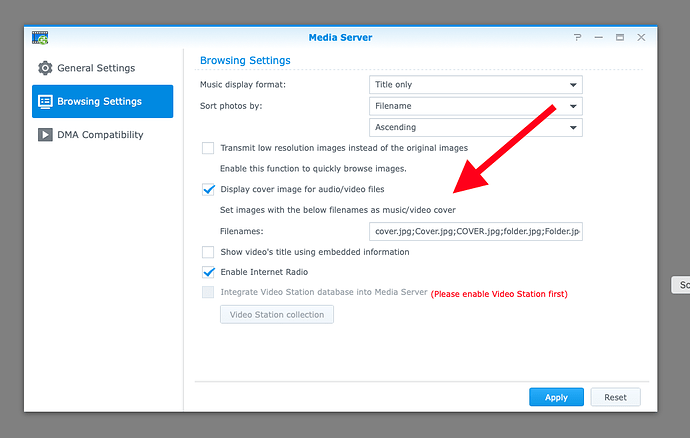 I think we should stop this until the OP (Pierre) gets back & tells us what he is doing or trying to do.
We are danger of confusing & complicating what is a very simple task.

I do both tbh, so the artwork is valid in iTunes and via my Synology.

Thank you for all your answers. Really a beautiful community. I had almost 10 thousand CDs to rip. I used dbpower for half of them and asunder on my big Linux computer. Then I transferred my flac files to the music section of my NAS. by opening the server on my NDX2 I have access to all flac files without exception. Except that many don’t have a cover unless I click on the blue music note.

p.s. if I proceed by Roon, all covers are displayed. I wanted to try it with the application of Naim via Synology. thank you

Roon uses its own database for metadata, so it shouldn’t have the same problem with artwork that you have with your Synology. It’s strange that the cover appears when you click on the note symbol, I suspect this is caused by the UPnP server you are running on the NAS. As mentioned above, you could try running a different server, such as Asset.

dBpoweramp will always find & embed the album art, that is assuming you do nothing wrong.
I don’t know the other program you used, asunder ?, never heard of it to be honest.
I suspect you might need to re-rip the problem ones using dBpoweramp.

Considering all of that, I have had a soft spot for asunder for quite some time now. Asunder provides a decent GUI-based experience, uses cdparanoia for ripping, converts to FLAC (and many other formats), organizes the ripped files in a configurable directory structure, and—to some extent, anyway—manages tags by looking up the CD in question on the CDDB music meta database.

Yes that may well be, but does it embed album art.
I had to use another laptop once to rip some CD’s, the Windows ripper did everything except the album art.
Whatever, please do yourself a favour & check out one CD test rip using both dBpoweramp & Asunder, then compare.
I have never ever found dBpoweramp fail to embed album art.

I’ve just tried playing music from my Synology 220+ using the built-in DS220plus server and it gives me cover art on the app and on the display on my Atom, even for a folder containing nothing but audio files. (Files have embedded artwork as @Mike-B says. )