The attraction of military nostalgia

The planes, trains and automobiles thread got me thinking, and specifically the warplane photographs, about our odd dichotomous relationship with instruments of war.

I see that a Spitfire is a genuinely beautiful design. A Vulcan might be considered similarly elegant, or at least striking but these machines were built to kill people, and have done so. The Lancaster was, arguably, an instrument of mass murder. We don’t tend to see pictures of Axis bombers do we, or celebrate their engine noise? It is no exaggeration to say that I have parents who might well be physically sick if they heard the sound of a V1. Might others feel the same about a picture of a B17 mimicking an engine fire? Do we feel more uncomfortable looking at a photo of a restored machine gun than we do an aircraft?

I have issues with war and glory, rather than war and remembrance. War museums and displays vary in their success with these two angles in my view. I see the interest in these old (and indeed contemporary) machines and the older I get the more uncomfortable I feel. I appreciate their engineering but hate their purpose.

I hope those enjoying that other thread appreciate I do not criticise their interest just reflect my own feelings. I did not want to post this in that thread.

I appreciate what you say. However…

The world is sometimes an ugly place and talking “nicely” to people doesn’t always work. I wish it did. Form my own, personal experience,…

I suppose we could have just walked away.

I respect your view and experience Don. This thread is not meant to be about pacifism though (although I am happy to debate that too) but the instruments of war that we seem later to come to almost worship as objects.

Bruce - I was thinking the similar thoughts when looking down the pic’s thread.

On one hand it’s boys’ own stuff, on the other, as you say, we mustn’t forget what these things were/are built for.

Sadly, it seems the human race has conflict programmed in to it, whether this be founded from love, access to resources, ideology & religion, greed and various other drivers & justifications.

I fear it will always be this way given the world around the globe is an ever changing place.

I think it’s more the interest and fascination in innovation, machinery and technology… and in just about all domains unfortunately innovation and development gets super charged during wartime or with military budgets … and even more so with aircraft, cyber and space… alas I don’t have any cool cyber pictures… on the whole they don’t look that impressive other than some of the visualisation aids which tend to look like something out of Minority Report. 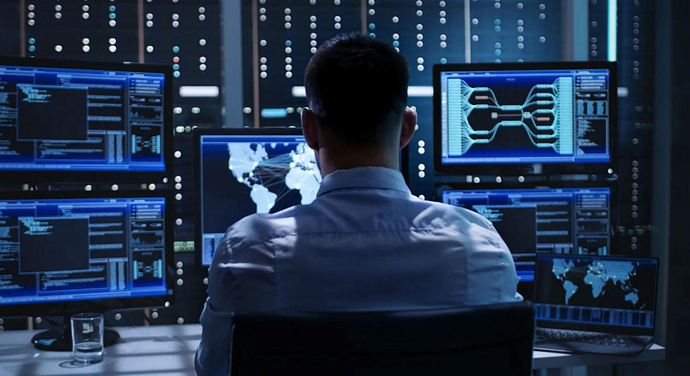 (This is not my photo)

When I set the thread of vintage planes, trains and automobiles it was about the machinery and it did include trains and cars.

When I put the Dakota picture up I commented that what was a a warbird could also be used for peaceful purposes. A recently deceased friend flew DC4s ito Berlin on the time of the Berlin Airlift, he said if the plane ahead crashed they just moved it aside.

I appreciate what you are saying about worshiping the instruments of war. That’s probably why most of us who’ve been there don’t talk about it too much either.

However, the thread was meant to cover more than just military hardware and it already has content about motorsport (which I find boring !) trains (which I find interesting) and no doubt could include old trucks and busses etc.

The one thing they all have in common, they pollute the planet. But we’ve got them, or had them. And they’re a testament to man’s ingenuity or stupidity - depending on your point of view, or mood at the moment of seeing them.

It’s a mixed up world, and this thread and the one we are discussing are no exception.

Bruce, the above isn’t meant to be a lecture, it’s just my own, somewhat mixed up thoughts !

Thank you Bruce, it was not meant as anything more than appreciation of vintage machinery , you may have noticed that there were some super photos of the Blue Bell Line , Flying Scot and some wonderful old cars.

One of may hobbies is photography and I have an interest in aviation .I have a wall full of these old planes and shortly I will be uploading some that have completely peaceful purposes

This is not a comment on the totality of that thread, but, as I said at the start, my reaction and our relationship to warplanes and other weapons. Age somehow neuters their purpose I think.

Your point Simon about war driving innovation is well made, sadly. In medicine treating disease attracts for more investment and research than preserving health ie prevention

Hi Bruce, your post is something I’ve heard/read a number of times, something I do agree with in some respects I have to say.
I’m attracted to old war birds because I consider them as part of my engineering heritage, the same for steam engines & cars. The fact that some of the aircraft may be weapons of death doesn’t come into it, I expect some Concorde pics will be posted before long, problem is (Concorde aside) most civilian aircraft don’t have the same awe factor as does a little single seater tearing up the sky on the end of a V12 1000+HP noise to die for engine.

The phrase ‘noise to die for’ maybe a little unfortunate here!

The truth is I also see the appeal of these machines (and the fantastic photography) and yet I recoil from their purpose. That is the dichotomy I mentioned in my opening post

I suspect we’re not actually too far off looking at aircraft and recoiling from their purpose of simply transporting people. I can’t look at passenger aircraft without feeling revulsion at the treatment of both passengers and staff by the likes of EasyJet, Ryanair and especially BA.

I think that military nostalgia is a small section of a much wider interest in historical creations, especially by men and boys. ( Don’t know why.)
There is always interest in old Aircraft, Trains, Bridges, Buildings, Cars, Cathedrals, Motorbikes, Ships, etc etc . Particularly those that were cutting edge at the time.
Generally I don’t think it is unhealthy.

I used to live near the RAF museum hendon. I must of been 20 times great museum.